The mother of Micheál Ryan, who died in yesterday’s Ethiopian Airlines crash, has paid tribute him, saying "he wanted basically to save the world".

Speaking on RTÉ’s Morning Ireland, Mr Ryan's mother Christine Ryan said he "had a vision for that. He put all his energies into doing that".

The 39-year-old married father-of-two had lived in Cork, but recently relocated to Rome to work at the headquarters of the UN World Food Programme.

Ms Ryan said that her son was turning 40 at the end of this month and the family was due to visit him in Rome to celebrate next week.

Mr Ryan's son was also due to be christened.

"We had our flights booked and everything," she said.

He was a continually enthusiastic person who lit up a room when he entered it.

"He had a marvellous vision," she said. "We would always be concerned but he had been in worse situations and survived. It’s just unreal."

Micheál was, she said, a continually enthusiastic person who lit up a room when he entered it.

"He wanted to help people. Everything was put into his work. He knew his life was at risk but he loved his job.

"There was a lot of danger for him. You couldn’t take that away from him. He was so enthusiastic."

She said although she was always concerned when Micheál travelled abroad, neither she or his wife, Naoise, had been that concerned about yesterday's flight, adding he had "come through far worse".

With regards to his work, Ms Ryan said he did an awful lot with Ebola, and also in landslides, and flood relief.

She said Micheál was all hands on deck with his family when he was at home.

His death has caused shock and sadness in his native Lahinch in Co Clare where his family is well known.

His mother is a retired teacher who taught in nearby Ennistymon.

He was an engineer working for the UN World Food Programme and had worked on a number of projects in Bangladesh and Nepal.

He had been living in Cork with his wife and two young children for many years, but recently moved to the Italian capital, where the UN World Food Programme headquarters is based.

In his native Clare, books of condolence have opened for Mr Ryan at Áras Contae an Chláir in Ennis and the West Clare Municipal District Office in Ennistymon.

Tributes have been paid to him from the President and Taoiseach, who praised his life-changing work and his compassion for helping others.

President Michael D Higgins said: "I express my deep sadness for the tragic loss of so many lives in the air crash in Ethiopia and may I convey the deepest sympathy of the Irish people to all the families and communities affected.

"In particular I wish to extend my deepest sympathies to the family of Michael Ryan, whose work in humanitarian assistance for the World Food Programme brought him onto the flight."

Taoiseach Leo Varadkar said that his thoughts were with the families of all those lost in the crash.

Mr Varadkar added that Mr Ryan "was doing life-changing work in Africa with the World Food Programme" and expressed his deepest sympathies to Mr Ryan's family, colleagues and friends.

The UN WFP Director of Human Resources has been in touch with the family to offer their condolences.

The WFP family mourns today -- @WFP staff were among those aboard the Ethiopian Airlines flight. We will do all that is humanly possible to help the families at this painful time. Please keep them in your thoughts and prayers.

There were no survivors after the Boeing 737, which was carrying 149 passengers and eight crew members, crashed shortly after takeoff from Addis Abada.

Seven Britons were among the dead, which included people from 35 countries.

The flight, which was bound for the Kenyan capital of Nairobi, came down near the town of Bishoftu, 50km southeast of  Addis Abada.

The jet left the airport at 8.38am local time before losing contact with the control tower at 8.44am.

The airline's chief executive Tewolde GebreMariam said the pilot, who had an "excellent flying record", reported difficulties and had been cleared to turn back.

The aircraft was just a few months old, having taken its first flight at the end of October.

Its last maintenance was on 4 February and it had flown just 1,200 hours.

It is the same type as the Lion Air plane which crashed into the sea off Indonesia last year, killing all 189 on board. 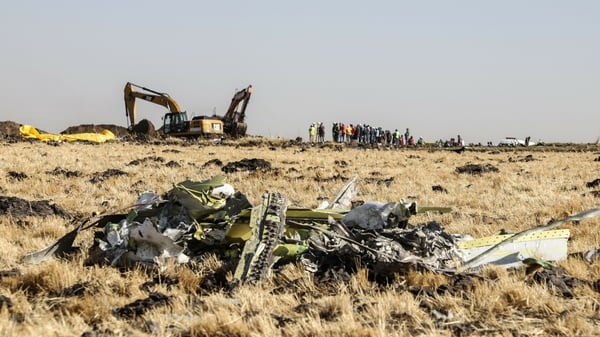