The Central Bank of Ireland has said there has been an improvement in the number of female candidates for senior roles in financial services but it is coming from a very low base, and more needs to be done.

He said similar people looking at similar information and facing similar circumstances are likely to rely on similar assumptions and make similar decisions.

He added that this type of group-think contributed to the depth of the financial crisis internationally and in Ireland and contributed to many of the conduct scandals that have subsequently emerged.

The Central Bank findings are based on an analysis of over 4,500 applications for approval to occupy senior roles within regulated firms in Ireland in 2018.

Since 2011, financial services firms have to seek prior approval from the Central Bank to appoint people to senior roles under the so-called "Fitness and Probity Regime", which assesses potential candidates to see if they are professionally competent and honest enough to hold such jobs. 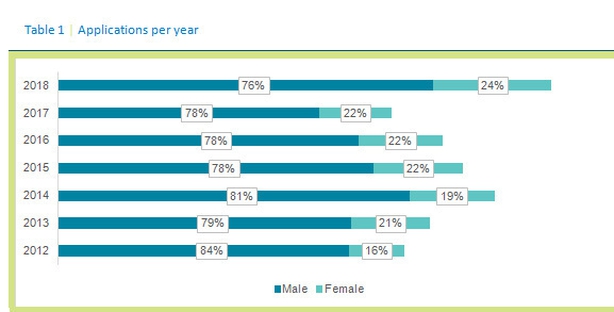 At an overall level, there has been an improvement in the number of female applicants for these senior roles, rising from 22% in 2017 to 24% in 2018.

But she added it was striking that there remains a pronounced gender imbalance at board level and in revenue generating roles.

In today's report, the Central Bank noted a 50% increase in the number of applications submitted during the year - mainly as a result of Brexit.

It also said the biggest change in composition was in the banking sector, where 31% of applications were for women compared to 25% in 2017.

About four out of five applications for board positions were for men, marginally down on 2017's levels of 82%.

This remained even more imbalanced for the most important chair of the Board and CEO positions, 84% of which were for men, the Central Bank said.

Today's research also shows that in revenue generating roles in the insurance sector, the male to female ratio is currently 6:1 at directorship level.

For risk management/control roles, the male to female ratio is 4:1, while in client facing roles the ratio is currently at 3:1.

"The Central Bank considers a lack of diversity at senior management and board level to be a leading indicator of heightened behaviour and culture risks in financial institution," Ms Rowland stated.