One of the Vatican's key advisers on clerical sex abuse, Cardinal Sean P O'Malley, has withdrawn from the World Meeting of Families where he was due to chair its first televised debate on child safeguarding.

Cardinal O'Malley, who is Archbishop of Boston and also Chair of the Pontifical Commission for the Protection of Children, was due to moderate the discussion on 'Safeguarding Children and Vulnerable Adults'.

In a statement this afternoon, the archdiocese said the cardinal would not be able to attend the World Meeting of Families as "important matters pertaining to the pastoral care of St John's Seminary in the Archdiocese of Boston and the seminarians enrolled in the formation program there require the Cardinal's personal attention and presence".

The statement went on to say that the cardinal has "great confidence" in the panellists and while he will not be able to join them "he will closely follow the proceedings from the Archdiocese of Boston".

Last week, the cardinal announced he wanted to establish an independent investigation into allegations of sexual harassment and other forms of intimidation at the diocese’s principle seminary, St John.

The cardinal also announced that the rector of the diocese had taken sabbatical leave for the coming term while the investigation was being conducted.

Read more:
The pope in Ireland

The Catholic Bishop of Limerick has said the church in Ireland needed to acknowledge the dark aspects of its history, such as the sexual abuse of minors by clergy and its cover-up, wilful or otherwise, together with the mismanagement that compounded the damage.

Bishop Brendan Leahy also said the arrival of Pope Francis in ten days' time would be a pivotal moment for the church, which should prompt Catholics in Ireland to be pro-active in repairing it.

Bishop Leahy made his remarks at this morning’s Assumption Day mass in the village of Ashford near Newcastle West.

He drew attention to the nearby mass rock, which is dedicated to the local patron Saint Ita, where persecuted Catholics often joined priests on the run from the British state to celebrate the eucharist in secret.

He told the congregation it was good to recall with gratitude how much the church, made up of ordinary women and men like those at today’s mass, did to contribute to Irish society.

But, he said, the church also needed to acknowledge the dark aspects of its history that have come to light especially in recent decades. 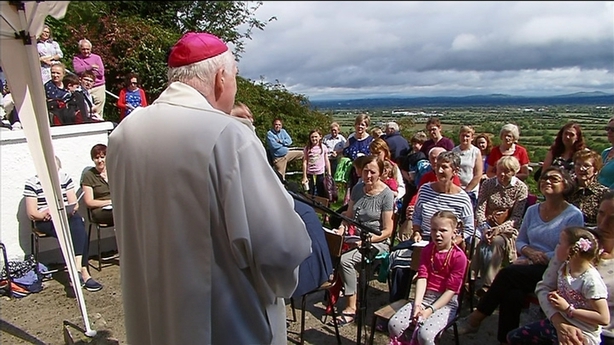 He pointed to a clericalism that ended up confusing power and ministry; the sexual abuse of minors by clergy and religious that did untold life-long damage to victims; the violent and repressive treatment by church representatives of young people sent to the State’s reformatory institutions; and the dark experience of vulnerable women in places meant to be residences of refuge.

He added that the cover-up, wilful or otherwise, and mismanagement that had been highlighted, had compounded the damage, adding to the church's shame.

Those of us of a certain age, however, know many, many who were very kind, caring and helpful. But to acknowledge with gratitude the good can never eclipse recognition of sin, criminality and evil.

"In some way, everyone in the church bears the shame of these dark aspects of our history. Few of us can throw stones as if we ourselves were not somehow associated."