The protesters are owed substantial sums of money for work they carried out in the schools.

The State has said it is an "absolute State requirement" that the three schools - Loreto Secondary in Wexford, as well as Coláiste Ráithín and Ravenswell primary school in Bray town - open next month in time for the new school year.

The three schools are among six that were being built under a Public Private Partnership between the State and a consortium led by UK construction giant Carillion, which collapsed last January.

They are virtually complete. Work on the six sites stopped shortly after Carillion's collapse.

The Carillion failure was followed by the liquidation of Sammon Construction, an Irish company that had been subcontracted by Carillion to oversee the work. 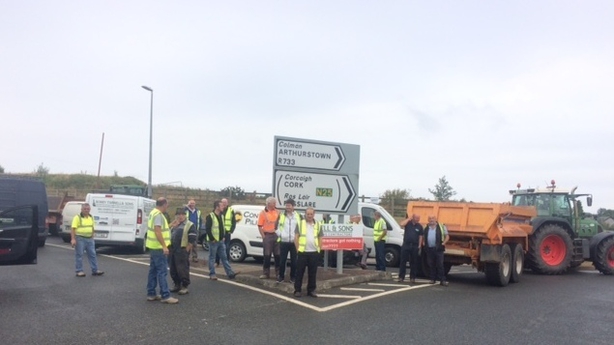 Subcontractors estimate that a total of at least €14 million is owed to small Irish firms, who were involved in the building and fitting out of the schools.

Today, painter decorators, scaffolders, landscapers, contract cleaners, and carpenters were among those who placed a picket on the new Loreto Secondary school building in Wexford.

Other subcontractors picketed the two schools at Bray.

A tractor and trailer, and vans with company logos, blocked the entrance to the Wexford site. 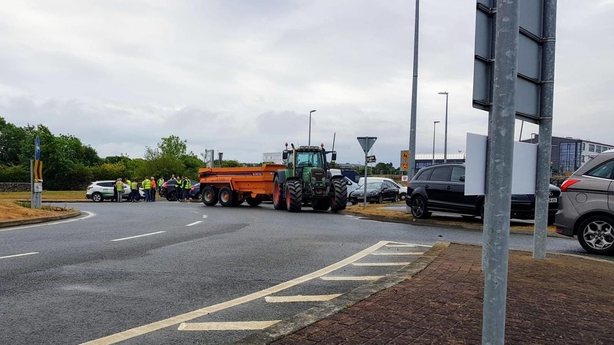 Security staff were allowed onsite, but no workers from the company that has replaced Sammon, Northern Irish company Woodvale, turned up.

The replacement company has no legal obligation towards subcontractors who carried out work under Sammon.

Subcontractors at Bray have said that Woodvale workers who turned up there did not pass the pickets.

In Wexford, men said they were owed sums of up to €100,000 for work they had carried out in the schools.

This includes landscaping of the grounds, carpentry work such as doors, skirtings and window fittings, as well as balustrades and other metal fittings.

Painter decorator Bobby Farrell, who is owed €70,000, said his company had been forced to let ten staff go.

The principal of Loreto Secondary School, Billy O'Shea, has said that the school's Board of Management has "every sympathy, and empathy" with the subcontractors.

However he said the school was "caught in the crossfire" and had itself no involvement in payments or contracts with the men.

The subcontractors insist that the State, on whose behalf the work is being carried out, bears a moral responsibility towards ensuring that they are paid.

The Department of Education has said that while the situation faced by the subcontractors is regrettable, it wants to emphasise that it is not, and was not, party to any contract with them.

In a statement, it has pointed out that the subcontractors' contractual relationship was with Sammon, which in turn had been contracted by Carillion Construction Ltd, the main contractor under the Public Private Partnership arrangement.

The Department of Education reiterated that Carillion had confirmed to the state's National Development Finance Agency that it had paid Sammon in full up until last December, around a month before Carillion collapsed.

The department said that while the situation faced by the subcontractors was "very difficult", "it would be regrettable if there were further delays in the opening of the schools".

The three schools are due to open at the end of August.