A post-mortem examination has found that Jastine Valdez died by strangulation.

A note left in the car used in the abduction of the 24-year-old pointed gardaí to the place where a body was discovered yesterday in south county Dublin.

Specialist forensic tests on the note found in the car driven by the suspected killer Mark Hennessy are continuing, but it has been established that the note also expressed remorse.

The note contained the words "Puck's Castle" and "Sorry".

This evening, hundreds of people attended a vigil in Enniskerry, Co Wicklow to remember Ms Valdez.

Amongst those gathered were many members of the Filipino community, as well as locals from Enniskerry and Bray.

A minute's silence was held in memory of Jastine Valdez.

The search for evidence continued near the lead mines and the disused golf course where the body was found.

Gardaí are satisfied the remains are those of the Filipino student who was attacked and bundled into a car as she was walking to her home in Enniskerry on Saturday evening.

They say within ten minutes of receiving a call about the abduction, the garda helicopter was in the air and three patrol cars were searching for a woman.

It is believed Ms Valdez was strangled within 45 minutes of her abduction. 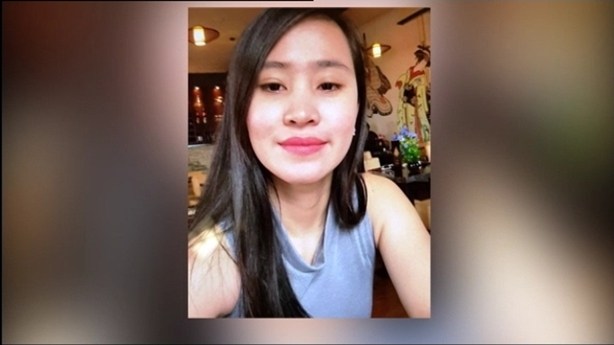 A murder investigation is now under way, but with the only suspect now dead, the file being prepared will most likely be for the Coroner's Court rather than the Central Criminal Court.

Gardaí are also investigating Hennessy's background. He had convictions for public order and drugs offences and was due in court next month to face a drink-driving charge.

They will also compare his DNA as part of a wider inquiry to see if he is linked to any previous or historical sexual assaults or attacks on women.

The 40-year-old was shot dead in Cherrywood Business Park on Sunday night after what is described as an interaction with gardaí.

The Garda Ombudsman Commission is investigating the circumstances surrounding the fatal shooting.

Detectives believe Hennessy went drinking last Saturday night after he killed Ms Valdez and they are appealing for anyone who may have seen him in a pub, particularly in the Ballybrack area, to contact them

They have also retraced his movements on Saturday and found he was in Killiney and Ballybrack before the murder.

Gardaí are still trying to establish a motive for the attack and at this stage they are treating it as random and opportunist.

Ms Valdez was bundled into a Nissan Quashqai as she was walking to her home in Enniskerry on Saturday evening.

The car was seen 35 minutes later on the Quarry Road near where the body was subsequently found at Puck's Castle Lane.

A purse and sock belonging to Ms Valdez were found in separate locations at the Rathmichael site, indicating her body was dragged over open ground through gorse before she was concealed in further dense gorse, where garda search teams found her body.

Meanwhile, gardaí have renewed their appeal for information about Ms Valdez’s disappearance.

Investigating officers are particularly interested in the movement of the black Nissan Qashqai (171 D 20419) and Hennessy, between 5pm on Saturday 19 May and 8pm on Sunday 21 May.

Hennessy was 176 cm (5'9''), of slight build and balding and wearing a dark coloured tee shirt, blue jeans and grey runners at the time.

Gardaí want to speak with people who were in the Dalkey, Killiney, Ballybrack, Sallynoggin, Cherrywood and Rathmichael areas.

The car may have stopped at restaurants, cafés, petrol station shops or bars in those areas.

Motorists who may have travelled in this part of county Dublin between Saturday and Sunday evening, and who may have a dash cam fitted, are asked to make the footage available to gardaí.

Taoiseach Leo Varadkar has condemned "the senseless and brutal crimes" that lead to Ms Valdez's death.

Speaking in the Dáil, he said a GSOC investigation was under way into the shooting of Hennessy by gardaí "for reasons that people will understand".

Mr Varadkar said that the Department of Justice was contacting the Valdez family to offer assistance if needed.

He also said that Tánaiste Simon Coveney has made contact with the embassy to see if there is any assistance that can be provided.