Sinn Féin has accused the British government of having no viable plan for restoring power-sharing in Northern Ireland.

Leader Mary Lou McDonald feared "entrenchment and drift" in efforts to resurrect devolved institutions at Stormont, which collapsed 13 months ago.

She accused the British government of engaging in a period of reflection that could create a dangerous political vacuum and reiterated calls for an intergovernmental conference.

Sinn Féin and their former Stormont coalition partners, the Democratic Unionist Party, have held separate meetings with Theresa May at the House of Commons.

She added that she had not contemplated an Irish Language Act, which is at the heart of the 13-month stand-off.

Ms McDonald said: "We can only surmise from the meeting with the British Prime Minister that the government does not have a plan, there is not a viable plan for carving a path to the restoration of the institutions."

She said she was disappointed that a period of reflection had begun. "Any political vacuum is extremely dangerous," she said.

She added: "I fear drift, I fear entrenchment, I fear that those elements who were likely never really up for a deal will dig their heels in further and are further emboldened.

"We are at a moment of decision." 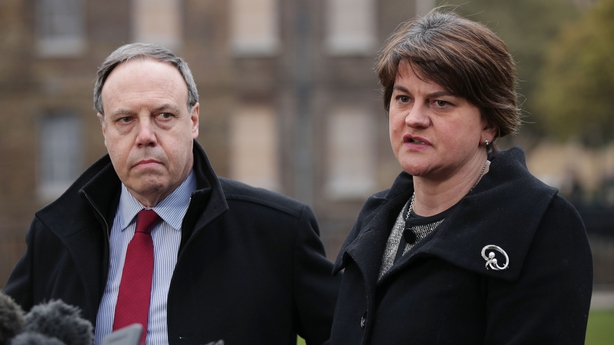 Mrs Foster said the DUP had not contemplated introducing an Irish Language Act in Northern Ireland ahead of last week's failure of negotiations with Sinn Féin.

She said: "We were not contemplating bringing in an Irish Language Act and I could not be clearer in relation to that.

"If you look at the so-called draft agreement that is only one of a number of documents that were circulated and put out and about, and I think the important thing is that we now reflect on where we got to in relation to all of those issues, we have a budget put in place, I think that is important for the people of Northern Ireland and that we move forward."

She expressed concern about the lack of proper governance in Northern Ireland and again urged Mrs May to introduce a budget for public services.

"I think she heard that very loud and clear. I'm hopeful that it will happen in weeks, and that it will set out the trajectory for public services in Northern Ireland."

It has been 13 months since the devolved institutions at Stormont collapsed in a row over a botched green energy scheme, which quickly expanded to include differences over identity and the Irish language.

Months of inter-party negotiations since then have failed to produce a breakthrough, although the British government has said progress has been made.