The Minister for Health has welcomed the announcement that there will be talks at the Workplace Relations Commission tomorrow in a bid to resolve the health support staff dispute.

Simon Harris said the consistent message from Government is that sitting around a table and talking is the way to resolve this dispute.

"The last thing patients need is more disruption so I do very much welcome the fact that this will take place tomorrow," he said.

He asked all sides to redouble their efforts to find a resolution in the "period of time" before the planned strikes next week.

SIPTU has said while talks will take place tomorrow, next week's strikes have not been deferred.

Strike action by 10,000 health support staff is under way at 38 hospitals around the country.

Health service management also said that there has been disruption to patients who are on hospital wards.

In a statement, the HSE said they are engaging with SIPTU locally on contingency plans to optimise patient safety.

The statement added that Emergency Departments are open and any patient requiring urgent care should attend.

The dispute centres on a job evaluation scheme, which the Government agreed to carry out during negotiations on the last Public Service Stability Agreement (PSSA).

The job evaluations examine whether roles have changed and whether pay rises are warranted.

A 24-hour strike by 10,000 health support workers is under way at 38 hospitals around the country. The industrial action began at 8am this morning. | https://t.co/zLYJUDyIMd pic.twitter.com/kjgRn8jFUZ

Just under 700 support staff, members of @SIPTU, are on strike at #Cork University Hospital in pursuit of their pay claim. They accuse the Government of reneging on its agreement with them and say trust between both sides has broken down. @rtenews pic.twitter.com/XHbtGMbO4O

The HSE said that whatever about coping with a single day of action, the cumulative effect of three days would put intolerable pressure on the system.

Minister Harris said the impact of today's strike will not be known until the day is over.

He expressed his extreme disappointment that the union went ahead with the strike and said he hoped calmer heads and common sense would prevail.

Earlier, Taoiseach Leo Varadkar said the Government was available to go to the Labour Court in an effort to resolve the dispute.

Mr Varadkar said: "Government wants to resolve this strike and we've offered a hearing at the Labour Court to try to resolve it and that's how so many disputes have been resolved in the past.

"I'd issue an invitation and appeal to the unions involved in this strike to come to the Labour Court where we can sort this out."

Mr Varadkar said that the PSSA is clear that if a union breaches it penalties can be imposed, but "that's certainly not what the Government wants to do".

Minister for Finance and Public Expenditure and Reform Paschal Donohoe also urged both sides in the dispute to go back to the Labour Court.

Speaking on RTÉ's Morning Ireland, he said that the health support staff are all due increases next year, which they will get under the current wage agreement.

Minister Donohoe said the Government wants to bring in the increases in a phased way, that is affordable and will keep the overall wage agreement in place.

He said he did not accept that the Government has reneged on its promises.

SIPTU has also threatened to escalate the dispute by balloting staff in at least 20 other hospitals for strike action, if its grievances are not addressed.

Read more:
10,000 health support staff to go on strike for 24 hours
Wednesday's strike by healthcare staff to go ahead after talks end

The President of the Irish Association for Emergency Medicine, Dr Emily O'Connor, who is a consultant in emergency medicine, has said that emergency patients should not be involved in health sector strikes.

On RTÉ's Six One, she called for a derogation next week, saying that medical staff cannot go into three days of strike without cleaning of departments, portering staff and health care assistants.

Meanwhile, a senior hospital consultant said the strike is having a "major and almost catastrophic" affect on services.

Dr Paud O'Regan, a Consultant Physician at South Tipperary General Hospital, said the strike has led to the cancellation of elective surgeries, endoscopies and other diagnostic procedures.

He said the dispute is leading to major inconvenience for patients within hospitals and is also causing difficulties with catering and cleaning, as well as bed management. 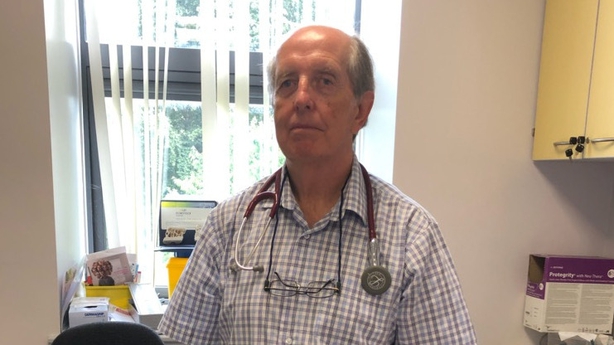 Dr O'Regan described the situation as "a very bad setback" over the course of one day but said a three-day strike next week would have a disastrous impact on health services.

He said it is a matter of the "gravest urgency" that the dispute is resolved before next week.

Dr O'Regan also said that the workers involved in the strike are among the lowest paid people in the health sector and that they are entitled to the increase in pay that has been recommended after an examination of the work they do.

Elsewhere, up to 400 support staff are involved in strike action at Sligo University Hospital, including house-keeping, catering and security staff, as well as theatre operatives and multi-task attendants.

Striking staff said it was regrettable that they were on the picket line, but morale was high and they were determined to see this dispute through. 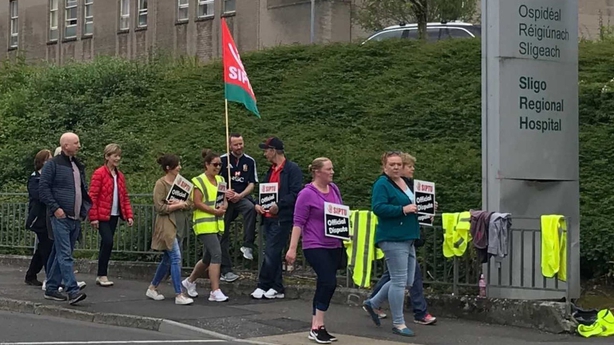 Speaking to RTÉ News, Karina Lynch, a member of house-keeping staff in Sligo hospital, said that they did not want to be there, but felt they were being treated differently to other hospital staff.

Support staff are essential to the running of the hospital and deserve to be treated with respect as well, she said, and it is in the hands of Minister Donohoe to resolve the dispute.