Some 73% of people in Ireland trust vaccines, according to new research, with 93% of parents reporting their children have been given a vaccination.

The global survey of more than 140,000 people in more than 140 countries found 79% of the world's population think vaccines are safe, with 92% of parents saying their children have been vaccinated.

The report, conducted by biomedical research charity Wellcome, found there is less certainty about the safety of vaccines in high-income regions, with 72% of people in Northern America and 59% in Western Europe agreeing they are safe.

However, 9% of people in Ireland asked if vaccines were safe said they "were not at all" or "not much".

In France, a third of people disagreed that vaccines are safe, which was the highest percentage for any country in the world. 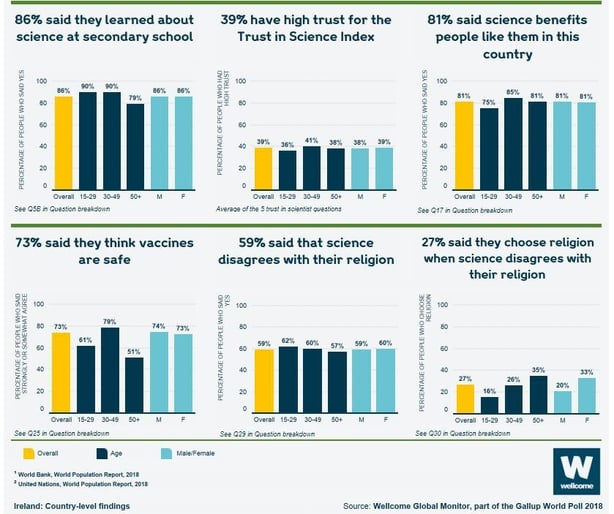 Read more:
Public urged over vaccination uptake
HPV vaccine to be extended to boys
Could the State introduce compulsory vaccination laws?
Vaccines and the plague of fake news

Charlie Weller, Wellcome's head of vaccines, said: "It is reassuring that almost all parents worldwide are vaccinating their children.

"However, there are pockets of lower confidence in vaccines across the world and we cannot afford to be complacent.

"To ensure society gets the full benefit of vaccines, we need to make sure that people have confidence in both the safety and effectiveness of vaccines and understand more about the complex reasons why this is not always the case."

The study comes amid a growing debate over whether mandatory vaccination should be introduced for children starting school.

Vaccines are recommended by the Irish authorities, but are not compulsory. As such, parents are entitled to withhold consent and forego vaccination.

In April, Minister for Health Simon Harris tweeted that he would be looking at the constitutional issues around making vaccinations compulsory for all children attending créches and schools.

Instinctively agree. Think we may have constitutional issues here. Will research further. #VaccinesSaveLives

Recent World Health Organization figures show that measles cases rose 300% worldwide to 112,163 in the first three months of this year, compared to 2018.

Anti-vaccination groups have been blamed for some parents not vaccinating their children with the combined measles, mumps and rubella vaccine (MMR) following Andrew Wakefield's discredited research linking autism to the jab.

The countries with the highest numbers of parents claiming to not vaccinate their children are China (9%), Austria (8%) and Japan (7%).

The report, called Wellcome Global Monitor, said trust in vaccines tends to be strongly linked to trust in scientists and medical professionals such as doctors and nurses. 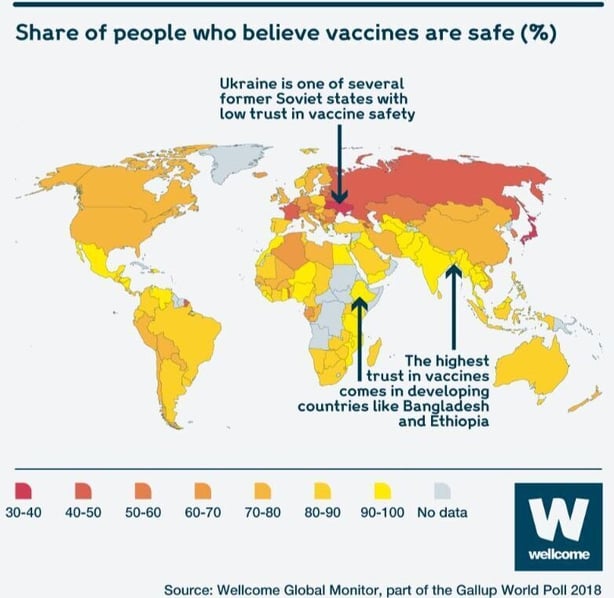 "No matter how great your idea, how exciting your new treatment, or how robust your science, it must be accepted by the people who stand to benefit from it.

"Vaccines, for example, are one of our most powerful public health tools, and we need people to have confidence in them if they are to be most effective."

"We need to care more about these connections if we want everyone to benefit from science."