Limerick city and county councils have embarked on a three-year project to control the spread of Giant Hogweed on the River Loobagh near Kilmallock.

The plant, which can grow up to five metres in height, is one of the most unwanted invasive species in Ireland and there is an EU-wide ban on the sale, growing and keeping of Giant Hogweed.

Introduced into Ireland and Britain in the 19th Century as a Victorian garden curiosity, it "escaped" into the wild firstly in the Dublin area.

Now it grows in more than 1,300 locations around the country, especially along river banks and other areas of damp ground.

It is a public health hazard due to its toxic sap, which causes severe dermatitis, and can cause blindness if sap from the plant got into someone's eyes.

Giant Hogweed is spread by seeds with each plant capable of producing up 50,000 seeds.

A team of experts has been working to cut the flowering heads off the plants in an area on the River Loobagh, but local authorities are keen to get the public involved, and a campaign will be launched later this month.

Chartered Environmentalist Dr Frances Giaquinto is appealing to landowners along the river bank area to check their gardens for Giant Hogweed.

Speaking on RTÉ's Morning Ireland, she said that because the plant was dispersed by seed, it was essential to start at the top of the catchment and work systematically down.

She said the team could do that, but if there were pockets of flowering plants that they do not know about, such as on private land, then eradication cannot be achieved.

She said: "We're appealing to people to look in their back gardens or fields, and if you see a plant that looks like this, please contact the council.

"It doesn't matter if you're wrong, we can come and look. If you give us permission, we can start to take action to eradicate it."

What happens to your skin?

Around 24 hours after touching the sap the skin will become red, with an accumulation of fluid under the affected part.

Within three days, a strong inflammatory reaction will become evident, and skin will become hyper-pigmented (unusual darkening of the skin), which can last for months.

Who is at risk?

Giant Hogweed is dangerous for gardeners, landscapers and other operatives working in areas where it is growing, or for children playing in affected areas. 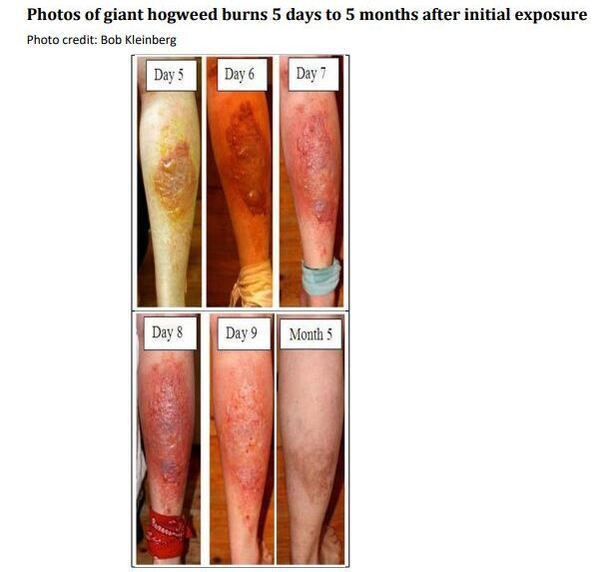 Nick Head, an invasive species contractor, said the plant was quite extensive in Ireland.

Speaking on the same programme, he said it spreads by seed, so the main way of getting rid of it is to eliminate the seed bank.

He said the majority of reports say the seed bank lasts for up to three years, with some reports claiming it lasts up to seven years.

"As far as I know, it's in every river and tributary coming down into the Shannon from Fermanagh, so it's a big problem. It's in areas where native vegetation is being overtaken for nearly a kilometre, and there's no other growth except for this plant," he said.