Fine Gael and Fianna Fáil's insistence throughout the General Election campaign that they will not go into government with Sinn Féin appeared to have divided voters in a near 50:50 split on the issue in the official exit poll.

The figure is confirmed in the official general election 2020 exit poll, which was conducted by Ipsos/MRBI on behalf of RTÉ, The Irish Times, TG4 and UCD.

The poll is based on the responses of more than 5,000 people at 250 polling stations across the country immediately after they voted yesterday.

Among these 15 topics was a specific question on whether Fine Gael and Fianna Fáil were right or wrong to rule out going into government with Sinn Fein after the general election.

On this issue, 51% of respondents said both Leo Varadkar and Micheál Martin were wrong to rule out Mary Lou McDonald's party, compared to 45% of respondents who said the Fine Gael and Fianna Fáil leaders were right to do so. 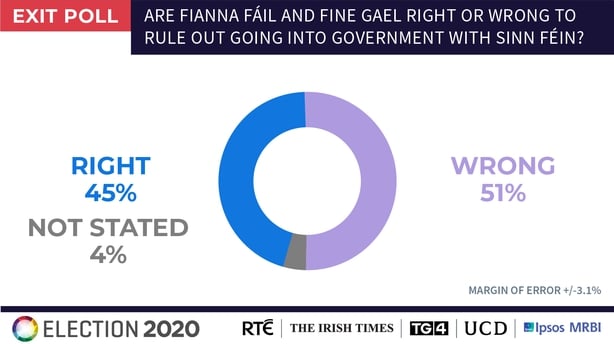 Given the predicted close nature of the general election result, the exit poll indicators are likely to put fresh pressure on Leo Varadkar and Micheál Martin to consider Sinn Féin as a viable coalition option.