Talks between teacher trade unions and the Department of Education have been continuing today in an attempt to finalise plans for this year's Leaving Certificate.

With no breakthrough as yet, Minister for Education Norma Foley is due to update the Cabinet sub-committee on Education on the matter tomorrow.

Sources at the Department of Education said it is hoped that Minister Foley will be in a position to announce concrete plans for the Leaving Certificate when she goes before the committee, but this is not yet certain.

A source said talks between the department, teacher trade unions and other parties were "really at the nub of the issue" today.

Students with additional needs and Leaving Certificate students are the priority in any return to school.

After that, at primary level, priority is likely to be given to smaller children for whom remote learning is more difficult.

Yesterday, Deputy Chief Medical Officer Dr Ronan Glynn said a return to school had to be a first priority, but that it had to be done cautiously on a phased basis.

He said the impact of the return of classes would have to be continuously assessed, partly because of the new variant, first detected in the UK, which is more transmissible.

Dr Glynn reiterated that public health concerns rested on the mobility of the more than one million people that a full return to school entails.

He said the country was going in the right direction to enable schools to reopen, but progress in reducing infection numbers over the coming weeks needs to be seen.

Any phased return will be subject to public health advice.

Earlier, the Taoiseach said it is very important that all those involved in talks around the format of this year's Leaving Certificate do everything they can to bring clarity for students.

Speaking on his way into a Cabinet meeting today, Micheál Martin acknowledged that it has been a "stressful and anxious time" for students and for the education sector in general and that he is hopeful that clarity will be forthcoming.

He said the talks have been "intensive and are continuing".

Taoiseach Micheál Martin said there will 'be clarity this week' on the Leaving Certificate. I Read more: https://t.co/W2iwyybXMw pic.twitter.com/z6jXrqnNgs

It is understood they are centred on the holding of the written Leaving Certificate and a parallel option to include a modified form of last year's calculated grades.

Orals, practical exams and the Junior Cycle exams are also part of the broader discussion.

The ASTI pulled out of talks last week over concerns that calculated grades would be the dominant option offered to students.

ASTI officials returned to the negotiating table after receiving assurances the union said it had received from Minister Foley.

It is understood that the Leaving Cert talks are separate to other ongoing discussions on a wider reopening of schools.

Sinn Féin education spokesperson Donnchadh Ó Laoghaire said Minister Norma Foley needs to provide her plan on when schools will reopen in March and the public health advice which underpins it.

Speaking at Leinster House this afternoon, he said: "I would like to see children back in the classroom at the earliest date that's possible, provided that public health advice backs that.

"There's no statement from NPHET, at this point in time, to say that it will be safe."

"Schools are mostly learning about this through the papers, TV and radio today. They are not after getting direct communication from the Minister for Education."

The @sinnfeinireland education spokesperson @Donnchadhol says Minister Norma Foley needs to provide both her plan on when schools are going to return & the public health advice which underpins it. @rtenews 1/2 pic.twitter.com/rBGBv2tJ3h

On the Leaving Cert, the Cork South Central TD said it was "really disappointing and very frustrating" that another Government deadline had slipping for finalising an exam format.

On RTÉ’s Six One News, he said that his party believes there should be a calculated grades system for every student with the option of a written exam for any student that wishes to avail of it.

He said that at this point nobody can guarantee that written exams will take place because it is not possible to predict what the status of the pandemic will be in April or May.

Mr Ó Ríordáin said it had been predictable that there would be a question mark for this year’s exams and that he had asked for a review of Leaving Cert 2020.

He said it was disappointing that this had not been carried out and that as a result, there was no information to hand that would enable decisions to be made about this process.

The Welfare Officer with the Irish Second-Level Students' Union said the varying messages on form assessment will be and when decisions will be announced is causing confusion for students.

Speaking on RTÉ's Today with Claire Byrne, Matthew Ryan called for exams to be held as close as possible to the original date of traditional Leaving Cert examinations.

He said it was important for decision makers to take into account the "mental duress" that this cohort of students are experiencing.

"This is not just about exams", he said. "This is about our entire life." 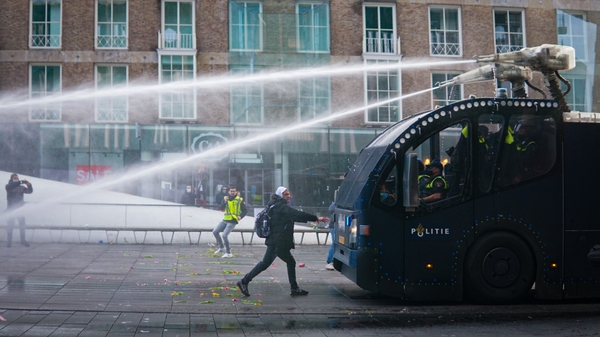