The Teachers' Union of Ireland and the Association of Secondary Teachers in Ireland have cast doubt on the ability to fully reopen schools at the end of the summer due to the tight time frame after the Government's plan was announced yesterday.

TUI General Secretary John MacGabhann said it will probably be the case that not all schools will be ready to reopen fully on 31 August and a staggered intake of students may be required.

He said hard and fast statements and rules are unhelpful in the current circumstances and people need to be pragmatic and realise there is a short time frame to implement the plans.

Speaking on RTÉ's Today with Sarah McInerney, Mr MacGabhann said there may be delays in finding contractors to carry out works under the minor works fund.

If schools are not made ready "absolutely on the button" then pragmatism must apply, he said.

Mr MacGabhann he was loathe to put a time on the delay and there should be a focus on the fact that everyone is doing their best to ensure schools reopen, but he would be surprised if there were "weeks" of delay.

ASTI President Deirdre Mac Donald said the time frame for changes to secondary schools to allow them to reopen in September is too tight and she was not confident that reopening plans could be implemented in a month's time.

Mr MacGabhann said it will be difficult but necessary to recruit the additional 1,080 teachers needed for September.

He said there is a large cohort of students in their second year of Professional Master of Education who could be utilisted and are garda vetted and registered with the Teaching Council.

In addition, there are a number of teachers on career break who may return.

Minister has 'every confidence' schools can reopen on time

Minister for Education Norma Foley earlier reiterated that schools will fully reopen in a safe and sustainable manner at the end of August.

Speaking on RTÉ's Morning Ireland, Ms Foley said it will be back to school as normal for the entire school community at the end of the summer.

She explained that primary school classes will be a "bubble" and within that bubble, there will be smaller "pods" and one metre distancing between each pod.

She added that social distancing is not a prerequisite for younger pupils.

The minister said she had every confidence that there is the capacity within schools to reopen.

Responding to ASTI claims that the deadline is too tight, Ms Foley said schools will reopen fully at the end of August, but there is latitude for principals to open schools on different dates.

Yesterday, the Government revealed its €375m school reopening plan, which includes funding for more than 1,000 additional teachers at post-primary being made available, in addition to funding for 120 extra counselling posts.

Ms Foley said pilot substitute panels, which have proven very successful, will be rolled out nationally and this will mean teachers being shared among a very limited number of schools.

The minister said a substantial minor works programme will enable schools to maximise the spaces in their schools.

She said the additional 1,080 teachers at post-primary level include the 180 guidance counsellor posts, which means the full restoration of this service.

The minister added there is a variety of ways in which the teachers can be sourced, pointing out that there are currently 1,300 teachers job sharing and the limit on the amount of hours they can work will be lifted.

In addition, there are more than 2,000 post-primary teachers who are registered to teach, but for a variety of reasons are not teaching and this will also be a valuable resource.

She said she has every confidence that these teachers will be in place for the new school year.

Minister Foley said the size of the challenge was not underestimated at any stage and that the €375m fund is an acknowledgement and endorsement of the significance of the sector.

Govt announces €375m plan to reopen schools
At a glance: What did we learn about schools reopening
Latest coronavirus stories

Asked if principals can stagger school reopenings, Minister for Education @NormaFoleyTD1 says there has always been a latitude for schools to decide their reopening day, but schools should reopen as normal in late August/early September | https://t.co/V1s4ZNtdhd pic.twitter.com/uE9W0L7nzW

However, speaking earlier on the same programme, Ms Mac Donald said a staggered return for students might be necessary to allow them and teachers adjust to a new regime.

She said schools will be a very different place in September and that principals and deputy principals have "a mighty task ahead of them".

Ms Mac Donald said bringing extra teachers on board is no small task and some schools will also need extra infrastructure or portacabins brought on site.

She said there will be strict protocols around movement in schools and "as closed a school regime" as possible will be maintained, adding that substitute teachers should not move from school to school, but be assigned to one school.

Ms Mac Donald welcomed the pause to curricular reforms and said that teachers will take their health advice from the experts.

"Our members will go back to a safe working environment," @astiunion President Deirdre Mac Donald says, adding "Even if the school is all ready to roll" staggered returns are needed, for people to adjust. "It's a very different place from September of any other year." pic.twitter.com/JyxcoXfa6X

No plan is perfect, says professor of microbial disease

Professor of Microbial Diseases at UCD Paddy Mallon welcomed the Government's plan which, he said, has all the hallmarks of the type of approach that would normally be seen in these circumstances.

He said no plan is perfect but the key is to get it up and running because the sooner it is implemented, the sooner that gaps can be recognised and filled.

Any part of the chain that is weak brings risk, but he said that the chain really starts in the home and parents need to take on a huge element of responsibility.

As a parent himself, he said, there have been days in the past when his children have not been fully fit but not unwell enough to keep off school so they have gone to class, but this cannot happen from now on.

Professor Mallon said the measures are appropriate for where we currently are as a community, but if community transmission began to increase, then measures may need to be adjusted to have a more active screening in the classroom - such as temperature checks.

Speaking on Today with Sarah McInerney, he said no one measure is perfect but risk will never be eliminated 100%, but there have not been big increases in community transmission, despite the fact that people are mixing again.

He said provided the system can keep a cap on these rates, the risks associated with the return to school remains low.

Principal of the Classic school in Navan Colm O'Rourke has said he is "positive" about the plan published yesterday and "welcomes the certainty" that it has brought.

However, he said, social distancing "will not work".

"Social distancing is finished anyway when teenagers are hanging around in large groups", he said.

"It is ridiculous that students will sit on buses mixing between schools. They will also be together in corridors, locker rooms and canteen. Social distancing is just not an option."

He said he welcomed that students will be able to travel on buses, as this allows for the possibility of Transition Year students to go out for various projects, and also for some sports to be played between schools.

Principal of Alexandra College in Dublin Barbara Ennis said she is pleased with the plan, but her biggest concern is social distancing at secondary school level, which will be "very challenging."

"Students will be so delighted to see each other, so trying to stop them from hugging and kissing each other will be tricky."

It is imperative that teachers and leaders are calm when students return to school, Ms Ennis said.

"We want to make sure in our school that we keep an atmosphere of cordiality and calm and as happy as we can so that students can feel this is a place where they can be themselves.

"That is where social distancing can be challenging."

Call for clarity on school transport

Meanwhile, Fergal Barton, Owner of Barton Transport and Spokesperson for the Coach Tourism and the Transport Council, has called on the Department of Education to provide further clarification on the obligations of drivers and private bus operators.

Mr Barton said the department has said secondary school students will have to wear masks on buses, but he said it needs to clarify what the responsibilities of drivers will be in this area.

He explained that private operators account for 90% of school transportation and he said these operators only have four to five weeks to get their vehicles ready for the necessary interior changes. 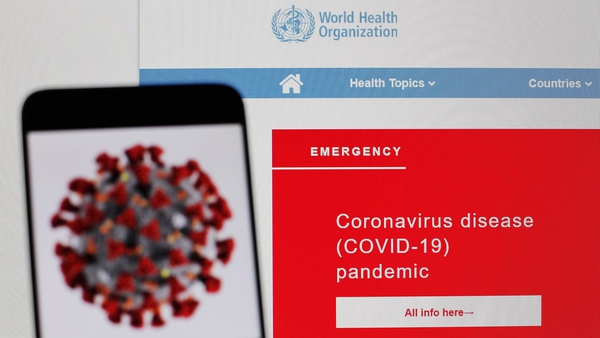 WHO warns Covid-19 pandemic is 'one big wave', not seasonal