A memo is to be brought to Cabinet tomorrow morning outlining possible alternatives to the exams.

It is understood the memo is the product of detailed consideration that has been given to the matter over a number of weeks by the Department of Education.

While the department had planned to hold the exams, the minister made clear last week that officials in his department were looking at "all contingencies".

It is just over a month since Taoiseach Leo Varadkar asserted the exams would go ahead "by hook or by crook".

Earlier, Mr Varadkar said that if the Leaving Cert exams are cancelled "we have to make sure that we put in place an alternative".

Speaking in the Dáil, he said it was "extremely difficult" to come up with an alternative that would be fair.

He said this was "the kind of work that is being done now at the moment involving the unions [and other parties] and that is going to be difficult".

He has said the issue of the Leaving Cert is one that the Government wants to bring to a conclusion this week.

The Taoiseach added that while it was possible to hold the exam within public health guidelines, it would not be the Leaving Cert "as we know it".

Responding to questions from Solidarity/People Before Profit's Mick Barry, he said he totally appreciated that the uncertainty was causing enormous stress.

Mr Barry said that in 20 years as a public representative he had never before seen a Government decision cause so much mental anguish to young people.

A survey of students found four out of five did not want the exams to go ahead, he added.

He told the Dáil they felt they were being forced to do exams against their will.

Mr Barry said he had held an online meeting last night with 2,500 Leaving Cert students and he asked for a commitment to cancelling the exams.

Discussions on reaching a definitive decision as to whether or not to hold exams for this year's Leaving Certificate students continued today after teacher representatives were briefed at trade union meetings last night.

ASTI and TUI executive committee members discussed other mechanisms for measuring student attainment, such as predicted grading and school profiling.

Union representatives were briefed on grave problems that the State Examinations Commission has identified with holding the exams, including the difficulty of maintaining social distance between students.

Teachers discussed the feasibility of using existing data, such as school track records to arrive at alternative ways of assessing students.

They also discussed the feasibility of awarding predicted grades.

This evening, Chief Medical Officer Dr Tony Holohan said it is for the Department of Education and the Minister for Education to determine if the Leaving Cert can go ahead in keeping with public health advice.

He said the advice is clear in terms of social distancing and the time people can spend indoors in close proximity to others and it is up to the Department to determine if it can follow the advice to protect students, examiners and others.

The department knows more about the operation of exams than he does and if his advice is required he will provide it, Mr Holohan added. 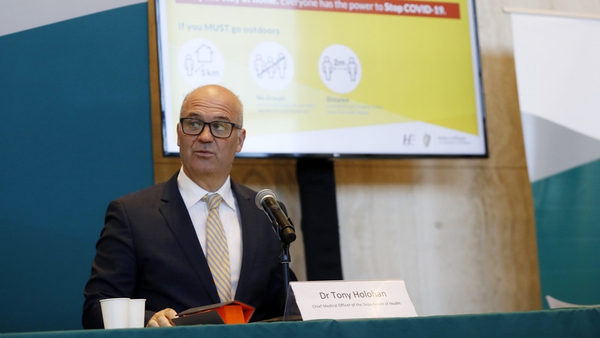