Clamping fines in Dublin city are to increase from €80 to €125 next week.

The 56% rise comes into effect on 1 March following a decision by Minister for Transport Eamon Ryan.

The Green Party said it is a proportionate increase which will help discourage illegal parking.

But the Automobile Association said that while clamping is necessary, the higher fine comes at a bad time for hard pressed motorists.

"The fine was set in 1998 so I I think a rise to 125 is a reasonably modest measure and it isn't really a significant increase when you consider when it was last set," Ms Horner said.

"Given the importance of clearing up our footpaths or cycle lanes or bus lanes, I think it is a very appropriate measure to be bringing in to help the city move a little bit more freely, to clear up our city streets in the way that I know so many people want to see Dublin really becoming a much more accessible pleasant city to walk around." 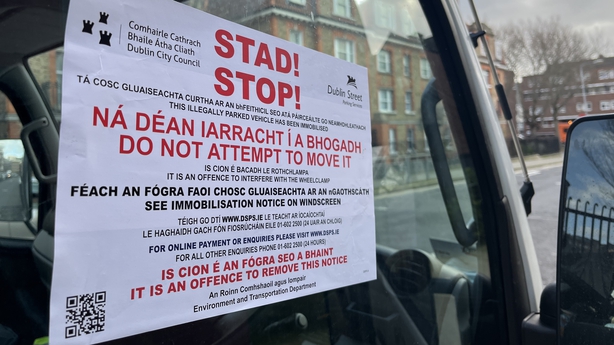 The AA said the rise was coming at a bad time for motorists who are already experiencing a "perfect storm" when it comes to rising costs of running a car.

"The increase in costs is another blow to the beleaguered motorist who is now facing increased charges and tolls, and of course the more pressing issue of record petrol prices," said the AA's head of communications Paddy Comyn.

However, he said clamping does have a role in traffic management in the capital.

"Clamping, when it is done fairly, is something of a necessary evil and it has served a purpose over the years in keeping manners on illegal parking," he said.

"Prior to its introduction there was something of a free-for-all in the capital in particular.

"This charge, of course, won't affect people who obey the rules and the park correctly, so for most motorists, it shouldn't be an issue."

"We believe that the service is necessary and the deterrent it provides to illegal and inconsiderate parking is something that is required," he said.

Over the past two years, Clarendon Street – which is just off Dublin's Grafton Street – the South Circular Road and Chelmsford Road in Ranelagh were the top three locations for clamping in the city.

It said the increase brings the fee in line with the maximum charge set by the National Transport Authority for private clamping and prevents any impression that parking in clamping zones on public roads is less serious.

It said the Department consulted with the broader local authority sector before introducing this increase and it will apply to any local authority using clamping as a means a parking enforcement on public roads.