Party leaders have failed to reach consensus on how to break an impasse over the position of Supreme Court Justice Seamus Woulfe.

He has been under pressure after details emerged of his attendance at an Oireachtas Golf Society event in August.

Different views over whether to initiate a process to remove the judge were aired during a meeting lasting more than two hours.

Mr Kelly said the meeting did not have Attorney General advice, so the opposition parties would have to seek their own legal advice.

Labour leader Alan Kelly describes meeting with govt on Seamas Woulfe controversy as "open" but says they will have to meet again @rtenews pic.twitter.com/pwWBTEfcGI

Co-leader of the Social Democrats Catherine Murphy said there had been an airing of views at the meeting, but they did not reach a resolution.

She said there had been an open discussion, and she would be surprised if there was not another opportunity to "swap notes".

People Before Profit TD Richard Boyd Barrett said members of Government were being cautious about what they were saying at the meeting.

He said they recognise there is a problem, but they are not sure from a legal point of view what they can do.

Mr Boyd Barrett said there is also concern that an impeachment process would be a long drawn out process.

People Before Profit TD @RBoydBarrett says there was no consensus reached at meeting with government on Seamus Woulfe controversy @rtenews pic.twitter.com/VC7DMWcV6J

Mr Martin met all the party leaders this afternoon to discuss the stand-off in the Supreme Court over the judge's position.

The Taoiseach said the meeting would seek to agree a collective approach to the issue, which has arisen as a result of the Supreme Court judge's attendance at the Oireachtas Golf Society dinner in August.

Taoiseach not told of other interest in position

Earlier, the Taoiseach said he was not told that at least three judges had expressed an interest in the position on the Supreme Court that was filled by Mr Justice Woulfe in July.

Speaking on RTÉ's News at One, Mr Martin said he did not feel misled because the appointment of judges should not be for political negotiation.

He said the Judicial Appointments Advisory Board had selected Mr Justice Woulfe and he had no difficulty in ratifying that appointment, adding that the less political involvement in the appointment of judges the better.

"To me, the appointment of judges should not be for political negotiation. JAAB had selected Seamus Woulfe and as far as I'm concerned, that was it from my perspective," he said.

Mr Martin said he does not know whether the Tánaiste was aware if other judges were interested in the position.

He said: "My general view on this is the less political involvement in the appointment of judges the better. And that's why I was happy to stand back and say okay JAAB has made the nomination here.

"I'm happy to ratify that nomination." 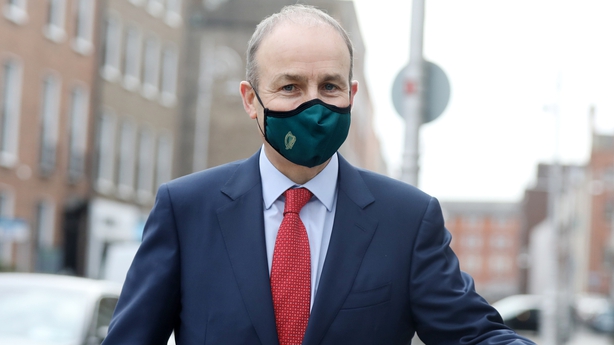 Mr Kelly said it would not be tenable for the Taoiseach to sit at Cabinet with Minister for Justice Helen McEntee if she did not inform him that three other judges had applied to be appointed to the Supreme Court.

He said very serious issues have been raised in a report in the Irish Times that other judges had written to the Government expressing an interest in the Supreme Court vacancy, but that the leaders of Fianna Fáil and the Green Party were not informed.

Mr Kelly said there are two scenarios at play.

He said: "Either the Minister for Justice made this appointment solely or possibly with the knowledge of the Tánaiste and did not inform Cabinet members of other applicants.

"In doing so she did not inform the Taoiseach. The idea that the Taoiseach can sit at Cabinet with a Minister for Justice that did not inform him that three other judges had applied for the job, raises questions about whether it is tenable that they can sit together in the future."

He said the alternative, which he said, has been denied by the Taoiseach, is that this was part of an understanding or agreement related to the Programme for Government negotiations.

"I have to accept the Taoiseach at his word that this is not the case because if it was the case, it would essentially undermine our democratic process and would undermine the whole judicial process and the appointments process," he said. 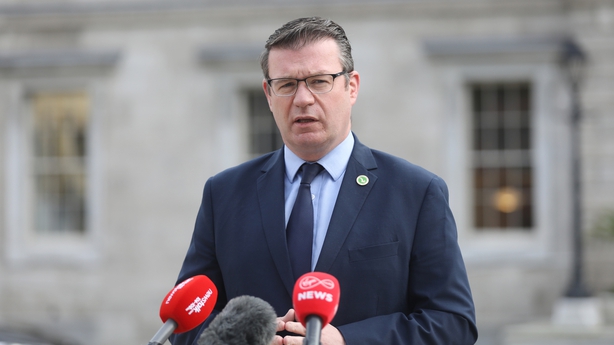 Earlier, a spokesperson for the Minister for Justice said her predecessor Charlie Flanagan wrote to the JAAB, which is chaired by the Chief Justice, in February to request a list of suitable candidates.

They added: "JAAB decided to recommend one candidate, Séamus Woulfe, whom it considered suitable for appointment to the Supreme Court.

"The Minister brought a memorandum for the Government's consideration to Cabinet on July 15th last.

"The Government decided to nominate Séamus Woulfe for appointment by the President to the Supreme Court."

Mr Justice Woulfe was among more than 80 guests, including then agriculture minister Dara Calleary and EU commissioner Phil Hogan, who attended the event, despite Covid-19 public health guidelines placing limits on indoor gatherings.

Mr Calleary and Mr Hogan both subsequently resigned, as did Jerry Buttimer, who stepped down as Seanad Leas-Cathaoirleach.

Mr Martin said the consideration of a motion of impeachment in relation to the position of Mr Justice Woulfe depends on the views of other members of the Oireachtas.

Correspondence released at the start of the week showed that Chief Justice Frank Clarke had told Mr Justice Woulfe he should resign.

Following that, opposition parties had called for the issue to be addressed by the Oireachtas, with some going as far as questioning whether his position was tenable.

However, there has been a change of tone as the week progressed, with all parties stepping back before deciding a way forward.