Tests have confirmed that a case of the Omicron coronavirus variant has been confirmed in Ireland.

The tests were conducted at the National Virus Reference Laboratory.

Eight of the samples underwent whole genome sequencing and one of those eight was confirmed as having the Omicron variant yesterday.

Dr De Gascun said it is a travel associated case to one of designated countries, which have confirmed cases of Omicron.

The case was identified in the last week, and is a current case rather than an older case.

Dr Holohan said the spread of infection in Ireland has slowed, with the reproductive, or 'R', number now estimated to be at 1.

However, Dr Holohan said there continues to be an increase in Covid cases among young people, particularly in those aged between five and 12 years, however positivity rates have dropped across most age groups.

He credited the roll-out of the booster vaccines as one factor responsible for the decline.

The briefing heard that the demand for testing is matching levels reached in September after schools returned, and that overall, testing is up for those under 18, and people aged between 35-44.

It also heard that scientists are not aware of any additional cases associated with the confirmed case and there is no evidence of community transmission of the variant so far.

The "tipping point" as to when a new variant becomes dominant usually takes between four to six weeks.

So far, the European Centre for Disease Control has said that all cases of the variant found in Europe have been either mild cases, or in people with no symptoms.

The World Health Organization has said it will take several weeks to assess the threat posed by Omicron.

It comes as the Department of Health has confirmed 3,793 new cases of Covid-19.

Separately, the Health Service Executive said there was an issue with the Covid-19 test portal earlier this morning, which meant that some people had difficulty when they were trying to book a PCR test.

It said it has now been resolved and the online system is operating normally.

But it has asked those who did not receive a verification code, to re-book an appointment. 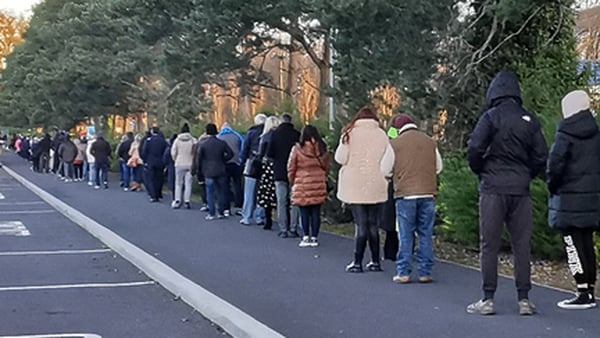