Government officials will resume their deliberations in the morning on how to iron out anomalies in the new plan to reopen the late night entertainment industry, which is due to start on Friday.

It is understood that Minister for Culture and Arts Catherine Martin was in contact with arts and music representatives earlier today.

The Restaurants Association of Ireland and the Licensed Vintners Association say they have not been invited to any talks tomorrow.

Government sources suggest, however, these groups are likely to be contacted in the morning to garner their views on what should happen.

Taoiseach Micheál Martin told RTÉ News that he accepts the need for clarity, adding he also understands that the timelines are short.

As part of tomorrow's deliberations, there will be a meeting of the Regulatory Forum - a body involving the gardaí, the Heath and Safety Authority and environment health officials.

The Taoiseach said these officials will be charged with working out what is termed an enhanced form of compliance and enforcement, to ensure that people are adhering to the guidelines.

When asked why live venues will be restricted to only seated guests while nightclubs appear to have fewer constraints, Tánaiste Leo Varadkar said that will initially be the case but hinted that these seating restrictions could be eased over time.

Speaking on RTÉ's Prime Time, he said the National Public Health Emergency Team (NPHET) is trying to get away from "banning normal activities".

"There are two options, one was pause to see if things got better. They advised against that because things won't fundamentally change over the next few weeks.

"This is going to be the new normal for the next couple of months."

Mr Varadkar added that there are no guarantees "this will work out" as he said projections show that cases and hospitalisations are likely to rise.

He said he trusts the projections, and despite the fact that NPHET, NIAC and Government members will not always have absolute unanimity on everything, he believes they share the same view on the way forward today.

Taoiseach @MichealMartinTD sums up the Government's message on #Covid19 in three requests: Wear a mask when meeting indoors; if you run a business, enforce the Covid pass; and if you are not vaccinated, get a vaccine | Live blog: https://t.co/1KXaEKIvBP pic.twitter.com/uGDmF6feEo

Earlier, it was announced that any sectors or businesses due to reopen on Friday can do so but with specific protective measures in place.

At a briefing at Government Buildings, Taoiseach Micheál Martin said the progress made over the course of the last year is "real and tangible and has to be protected".

The Cabinet met at Dublin Castle earlier to consider the advice from the National Public Health Emergency Team in relation to the planned easing of restrictions.

This Friday was due to see an end to the requirement for physical distancing, or mask wearing outdoors, or indoor, in private settings.

NPHET had advised that existing restrictions on hospitality should stay in place until around spring 2022.

The Government's revised reopening plan includes the return of normal trading hours in bars and restaurants but table service only measures will remain with a maximum of ten adults at a table.

These premises and nightclubs will only be open to those with a digital certificate.

The Taoiseach has said the measures announced today will stay in place until February, under a recommendation from NPHET.
Micheál Martin said the key point NPHET is making is that the protective measures include masks, hygiene and social distancing where appropriate. pic.twitter.com/2PG6Hsvk6K

Mr Martin said businesses or any event that allows people indoors must check for proof of vaccination and enforce the rules.

The caps on numbers at weddings and religious ceremonies are also to be dropped and a return to full capacity at sports stadiums has been included under the measures agreed by cabinet.

The Taoiseach said Covid passes will not apply for outdoor events.

He added that fixed capacity will no longer apply for indoor and outdoor activities but protective measures must be put in place. Mr Martin said where groups are mixed indoors, pods of six will apply.

Antigen testing will also play a bigger role in this phase of reopening and tests will be sent to fully vaccinated close contacts.

These new measures will be in place until February 2022. The Taoiseach said there will be sector specific guidance issued.

He asked that anyone who has not been vaccinated or who has not received their second dose to make arrangements for this.

Mr Martin said the changes to the reopening plan give space to make sure the next steps towards normality are safe and sustainable.

Read more: Covid-19: 'Collective behaviour' key to moving forward
Hospitality sector must continue to use Covid certs
NIAC approves vaccine booster for those aged 60 and over

He said the Government is not putting capacity limits on national outdoor sporting events, adding that protective measures such as masks will apply.

In relation to booster vaccine advice, the Taoiseach said the National Immunisation Advisory Committee said in its correspondence to Government and to the Chief Medical Officer that it is going to keep the administration of boosters to healthcare workers under review.

Mr Martin said he understands the concerns that are there in relation to healthcare workers, but the Government is not the expert on the issue.

At the same briefing, the Tánaiste said the pandemic is not over yet and "unfortunately we're going to have to get through at least another winter before we can be safely say it's behind us".

Leo Varadkar said: "We're not where we hoped or expected to be for October 22nd".

In August the Government thought that Ireland would be past the peak of the Delta wave, but that is not the case and "we're most likely experiencing a twin peak".

Staggered and phased return to the office is possible...but people who can and want to work from home should be facilitated - Tánaiste

He said NPHET modelling and projections indicate that cases will continue to rise and peak around the end of October or in November.

The Tánaiste said that modelling also shows that hospitalisations will rise to 800-1,000 peaking around mid-November with ICU numbers peaking at 100-150 around the end of November or early December.

He described the change to the plan as "deeply disappointing", adding that a lot of sectors who had hoped to be fully open with full capacity "will be crestfallen that we haven't got out the gap just yet".

There is no need to reimpose restrictions, Mr Varadkar added, because a high proportion of the population is vaccinated.

He said that if these numbers existed last year, the Government would be announcing that it was reintroducing curbs.

A large number of people including children are unvaccinated, the Tánaiste said, and there is evidence that the immunity is waning particularly among those who were vaccinated more than six months ago.

At a glance: What's in the Government's new reopening plan?

Mr Varadkar said NPHET had considered a full pause for a few weeks, but it recommended against that "on the basis that the situation will not be much different in a few week's time and it's going to be like this for a few months".

He said the country is going to have to live with Covid-19, this is not going to be easy, and it means adjusting to a new normal for at least the next couple of months.

The strategy has three elements - vaccines, test, trace and isolate, and keeping our economy and society fully open but with protections.

The Tánaiste said that testing will resume of fully vaccinated people who are close contacts and have no symptoms, but this will be done through antigen testing to supplement PCR testing.

People who are going to be in groups or crowds will be encouraged to start self-testing and using antigen tests to do so, Mr Varadkar added.

Minister for Health Stephen Donnelly said the advice the Government received from NPHET was a "really serious note of caution" on various areas including epidemiology and hospitals.

Speaking on RTÉ's News at One, Mr Donnelly said the five-day case average at the moment is around 1,700.

"I can tell you that the number of cases that'll be reported later on today will be well in excess of 2,000," he said.

"So we're seeing about a 40% to 50% increase in average daily cases over the last month, so this has moved quite quickly.

"The result of that is more people in hospital ... and more pressing again is the number of people in ICU."

The minister said NPHET's advice was essentially that while reopening can continue, it has to be done "more carefully than we had all hoped to do it".

He said that up until about two weeks ago, the Government was following the "most optimistic" of the four scenarios that NPHET had laid out.

Mr Donnelly said "several thousand" vaccination certificate checks have been carried out at venues by the Health Service Executive and Health and Safety Authority, and about two thirds of venues are in compliance.

He said that according to new survey results, one in three diners have said they are not being asked for their cert.

"That's not good enough," Mr Donnelly added. "We need a much, much higher rate of compliance than that. There's going to be intense engagement with the sector by the various Government departments.

"What I would say to the sector is - I know you've had a really tough year and I fully understand what you've been dealing with, and the majority are compliant, but we need to get much higher than a two thirds compliant rate on these Covid passes.

"They keep your patrons safe and they keep your staff safe, and it really is important and it is a legal requirement for you to strictly enforce the Covid pass."

NIAC approves vaccine booster for those aged 60 and over 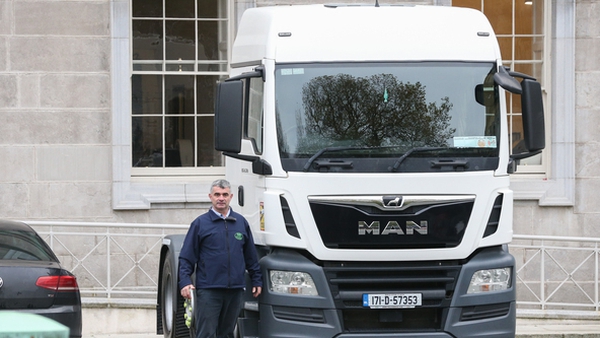