The Department of Health has said that the Mandatory Hotel Quarantine system will continue to operate for as long as is considered necessary, although arrivals from just seven countries are now required to enter the system.

New figures show that more than 10,000 people have entered the system since it began five months ago.

Mandatory Hotel Quarantine was introduced here in late March to help stop the spread of Covid-19.

In its early days, it was beset by problems, with people absconding, complaints about conditions and the sick and bereaved appealing for leniency.

Exemptions for the fully vaccinated and those travelling for medical reasons followed.

New figures released to RTÉ News show that a total of 10,196 people have entered the system to date.

More than 2,000 people per month were entering at its peak, but since travel restrictions eased on 19 July, that figure has fallen to 1,450.

3,376 appeals have been made by those in mandatory hotel quarantine.

The department has said that about 30% of these were repeat appeals and a total of 517 appeals have been granted.

159 people have absconded from the system over the past five months, with just 35 of these returned to the system with the assistance of gardaí. 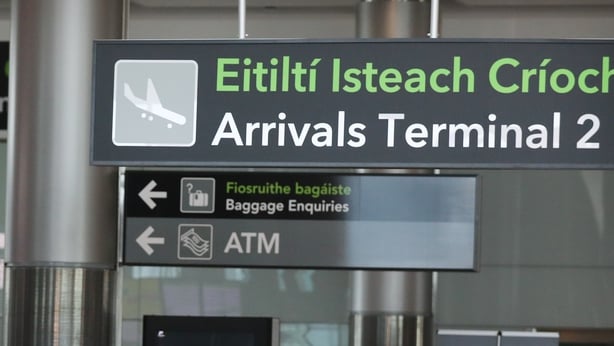 This weekend, 23 countries have been removed from the list of designated states, leaving just seven countries on the list.

The number of hotel facilities used for the system will be reduced from eight to three from next week, with just Holiday Inn Express in Santry and two Crowne Plazas in Santry and Blancardstown being used for arrivals into the system.

The Department of Health said mandatory hotel quarantine will continue to operate for as long as is considered necessary, but like other public health measures, it will keep the requirement for the system under review.

The Minister for Transport has said Mandatory Hotel Quarantine will remain in place despite the reduction in the number of countries subject to the system.

Eamon Ryan said the system was not intended to be permanent and that it will eventually be wound down but that will not happen "any time soon".

He said Covid is still rampant throughout the world and the system was needed in the event that protection was needed against a new variant.

Mr Ryan said the system has worked very well and its operation will be kept under review.

He said there is currently around 400 people in Mandatory Hotel Quarantine.

Ecuador will be added to the list from Tuesday, joining Argentina, Bolivia, Brazil, Chile, Colombia and Peru.

People who have been in or transited through a designated state in the previous 14 days must enter mandatory hotel quarantine if they do not have valid proof of vaccination or recovery from Covid-19.

Those travelling from designated states with proof they are fully vaccinated must present evidence of a negative PCR test taken less than 72 hours before arrival and undergo self quarantine until they receive a negative PCR result from a test taken five days after their arrival here.

Those travelling from designated states with proof they are recovered from Covid must also undergo self quarantine until they receive a negative PCR result from a test taken five days after their arrival here.

The Irish Council for Civil Liberties has said it is questionable if the Mandatory Hotel Quarantine system is viable at this point.

ICCL's Executive Director Liam Herrick said that as Ireland is committing to removing the remaining Covid restrictions, "it is essential that this system of detention is abolished at the earliest opportunity".

He said he believes alternative methods of monitoring international travel must be explored as a priority.