An independent report has found that the decision by the Beacon Hospital to provide vaccines to 20 teachers at a school in Bray in March of this year was incorrect, but was made in good faith.

The review found that proper procedures were not followed in giving the excess vaccine doses to St Gerard's teachers.

It said the decision to vaccinate the teachers was taken by Beacon CEO Michael Cullen alone and that "no one else participated in, or contributed to, the decision".

The report said the decision was taken by Mr Cullen in a "time-pressured situation in the mistaken belief that the risk of doses being wasted entitled Beacon to administer the doses to anyone who was available, other than patients".

Report author Eugene McCague said that "while the basis on which Mr Cullen made his decision was incorrect, I am satisfied that he made the decision in good faith".

In his report, Mr McCague said: "At the time, the clinical staff present, having regard to previous experience, and using their professional judgement, formed the view that they had a limited time horizon. I am satisfied that this view was formed in good faith."

He said that the use of the phrase 'HSE permission' in the message from Mr Cullen to the Principal of St Gerard's was "unfortunate in that it may have inferred that HSE was aware of the decision and approved of it.

"This was not the case. I am satisfied that what Mr Cullen intended by the phrase was that, as he believed at the time, it was in line with the HSE requirement."

According to the review, no one aware on 23 March of Mr Cullen's decision to offer vaccines to the teachers raised any reservations in relation to the decision. 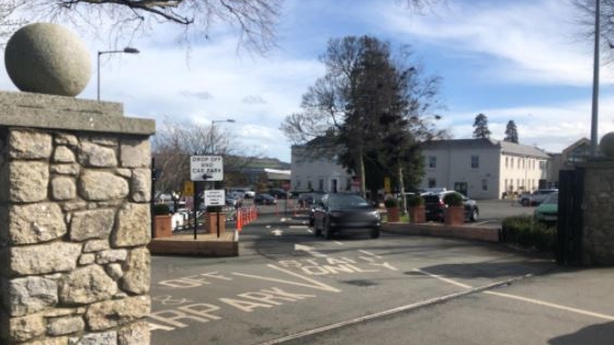 The review also found that significant efforts were made to locate healthcare workers and others on the Beacon Campus to vaccinate with the doses, but that "nearly everyone on the campus who wished to be vaccinated had received vaccines".

The board of the Beacon Hospital said it retains confidence in Mr Cullen.

In a statement, the board said it "acknowledges that the decision was not in line with national vaccine priority list and did not have HSE approval".

It added: "We as a board, regret that this series of events happened, and apologise for the upset caused.

"However, having considered the detailed review and the findings of the independent reviewer, the board has determined that it retains full confidence in Michael Cullen, our CEO."

The Minister of State at the Department of Justice and Transport Hildegarde Naughton told RTÉ's Drivetime that the Health Minister Stephen Donnelly has also asked the HSE to publish a report on the provision of vaccines by the Beacon Hospital.

She said that while she can appreciate there was time pressure to get these doses out as quickly as possible, at the time, she was certainly "taken aback" by what had happened.

People Before Profit TD Paul Murphy has described the report as a "whitewash" and that Mr Cullen has been let off the hook by the board of the hospital.

Speaking on RTÉ's Drivetime, Mr Murphy said: "In my opinion this report is a whitewash, because it avoids the question entirely.

"It doesn't ask the question at all, how come this school? As opposed to the literally over a hundred schools which are closer or the patients in the hospital, or others."

Mr Murphy said the report finds that what Mr Cullen did was wrong, "but it claims astoundingly that it was done in good faith".

The TD for Dublin South West said the circumstances around the provision of vaccines was a "scandalous abuse of position in the first place" and "a form of elitist queue jumping, whereby the CEO Michael Cullen treated these vaccines as if they were his to give to the people he wanted to give them to, which were the teachers of the schools where his children went".