Minister for Health Stephen Donnelly has asked the Health Service Executive to suspend vaccine operations at the Beacon Hospital in Dublin.

It follows revelations that the privately-owned hospital administered 20 leftover Covid-19 vaccines to a number of teachers at St Gerard's School in Bray.

In a statement today, Mr Donnelly said: "The provision of vaccines by the Beacon Hospital to a school was entirely inappropriate and completely unacceptable.

"I have considered this matter carefully and have worked with the HSE to assess the operational implications of suspending vaccine operations at the Beacon Hospital in Dublin.

"I have now asked the HSE to suspend vaccine operations at the Beacon Hospital with the exception of those people who have already been scheduled to get their vaccine at the centre.

"Alternative arrangements are being put in place by the HSE. In addition, I have asked the HSE to appoint a senior official to immediately examine what happened and make recommendations regarding any actions or changes required."

A spokesperson for Taoiseach Micheál Martin said: "The vaccines belong to the Irish people. There are clear rules and guidelines in relation to their administration.

"These prioritise the most vulnerable and frontline healthcare workers. There are specific rules relating to the allocation of surplus vaccines at the end of a day's administration.

"Clearly, these rules and guidelines were broken by The Beacon Hospital.

"What happened was wrong and a breach of trust. Behaviour of this sort undermines confidence in the vaccination programme."

The spokesperson continued: "The CEO should be held accountable for his actions by the board of The Beacon Hospital."

Tánaiste Leo Varadkar said the decision to suspend the contract was correct.

"This really touched a nerve with people, especially older people and the medically vulnerable who have been waiting to get their vaccine. A response was necessary.

"It was a clear breach of Government rules and simply should not have happened. I'd be interested to know what alternatives were really explored - were the vaccines offered to the gardaí in Dundrum, what about special education teachers and SNAs in local schools, local disability services, patients in the hospital who might have been well enough to be vaccinated, for example."

Earlier, the President of the Association of Secondary Teachers in Ireland said the vaccination of teachers at a school by the Beacon Hospital, first revealed in the Irish Daily Mail, was "not the right thing to happen".

Speaking on RTÉ's Today with Katie Hannon, Ann Piggott said the teachers who received the vaccines "may well have been ASTI members" but she could not confirm this.

She said HSE guidelines around contingency planning for vaccine administration should have been followed in this case.

"It is wrong, it shouldn't happen, it's unfortunate," she added.

A Fine Gael Minister said the Beacon Hospital's vaccination of staff at a school 13km away was "completely unacceptable" and there must be "accountability".

Asked whether the hospital's CEO should resign, Overseas Development Minister Colm Brophy said the company running the hospital should carry out an investigation and decide on the correct course of action.

Sinn Féin's Health David Cullinane said the suspension of the vaccine operation at the Beacon was "welcome" and the right decision.

He said: "We need full accountability in regards to this situation. This should not have happened and there is no excuse.

"It should not have taken so long for the minister to act. Public confidence in vaccine roll-out is crucial and is again undermined." 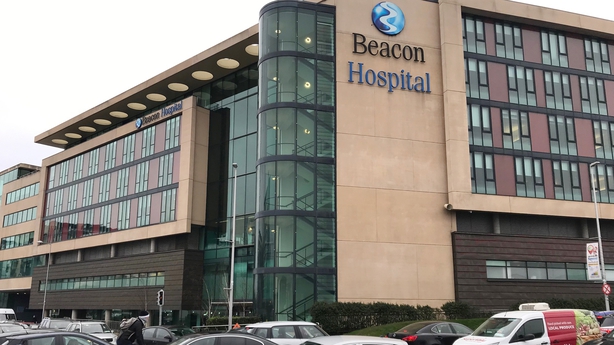 The information was contained in a Parliamentary Question from the Department of Health.

Mr Tóibín said nursing homes catered to the most vulnerable. He also criticised the Government for not going outside the EU procurement process.

People Before Profit TD Paul Murphy said what happened at the Beacon underlines the "need to end private education and healthcare".

He said in a statement: "While these vaccines were given to private school teachers 14km down the road, there were patients in the hospital who needed them and were waiting for them. There is no excuse for what happened.

Neale Richmond, Fine Gael TD for Dublin-Rathdown where the Beacon Hospital is located, called for a full HSE audit of the hospital.

"The decision by the CEO of Beacon Hospital to ignore clear protocols and give vital Covid vaccines to teachers from a school 14km away was both reprehensible and infuriating," he said.

"Within 5km of the hospital, there are no less than 27 GP practices who have standby lists of deserving people in the next cohort. That should have been the first port of call, there was ample time to do this."