Taoiseach Micheál Martin has said that "nothing is set in stone" following reports that the country is facing nine more weeks of severe restrictions.

Speaking to reporters in Dublin, Mr Martin said the Government will meet NPHET again on Monday and the emphasis right now is on schools, in particular the early years classes.

The Taoiseach said they are pursuing a very prolonged suppression of the virus and that NPHET wants to monitor each step of reopening.

He said there will be no large scale reopening of construction and that reopening depends on the progression of the disease.

He said there is a range of restrictions and it does not mean none will be lifted between now and May, adding: "It's open to review."

Earlier, the Tánaiste said that schools, childcare and ECCE programmes will reopen next month on a phased basis, but construction and other services will remain closed.

Calling on people to "dig deep", Leo Varadkar said that while case levels are falling, they are still high.

Speaking on RTÉ's News at One, he said the National Public Health Emergency Team advised the Government yesterday that schools and childcare can reopen in March and after the Easter break, but it remains too risky to reopen construction.

Mr Varadkar added that the vaccine programme will be ramped up, with the National Immunisation Advisory Committee saying that under 70s with underlying health issues can be prioritised, which, he said, should help to reduce pressure on hospital system.

In a post on Twitter later, he said the Covid test positivity rate was below 5% "for the first time since before Christmas" and added that "we are definitely back on track to overcome this virus".

Sinn Féin leader Mary Lou McDonald said a newspaper interview by the Taoiseach in which he indicated there would be an extension to severe Covid-19 restrictions has "added tremendously to the uncertainty and to the stress that people are experiencing".

Speaking on the same programme, Ms McDonald said people are "facing into another weekend of bleakness, and speculation, and one upmanship" because the next Cabinet meeting takes place on Tuesday.

She also called on the Taoiseach to ensure that family carers are moved up the vaccination priority list.

"This work that they do is absolutely invaluable and they are very, very upset and correctly so, having been completely forgotten in the prioritisation for vaccination ... If these people become sick themselves, then the question arises who cares for them or their loved ones."

Earlier, the Minister for Children said the majority of second level students will not return to school until after the Easter holidays.

Speaking on RTÉ's Today with Philip Boucher-Hayes, Roderic O'Gorman said the Government is considering an approach that would see children in junior and senior infants, and First and Second Class return to school on 1 March.

He believes the second phase of primary school reopening would include a return for the remaining four classes two weeks later [on 15 March].

But this would be contingent on ongoing engagement with NPHET and its assessment on the movement of people and the knock-on effects on virus levels in the community and final decisions would be made at Cabinet on Tuesday.

"It is my understanding that the focus is on primary school children and Leaving Cert classes and we will see how those four weeks [across March] have impacted.

"That will take us up until the Easter break and at that stage a decision will be taken in relation to secondary school classes outside of Leaving Cert classes.

"As things currently stand, I think the majority of secondary school children will probably be returning to education following the Easter holidays," Mr O'Gorman said.

The Department of Health said this evening it had been notified of 28 further deaths associated with Covid-19.

It also reported 763 additional cases of the virus. The number of people in ICU is unchanged at 151.

A further five people have died with Covid-19 in Northern Ireland, the Department of Health there has said.

Another 313 people tested positive. A total of 369 hospital beds are occupied by Covid-19 patients, with 49 in intensive care. 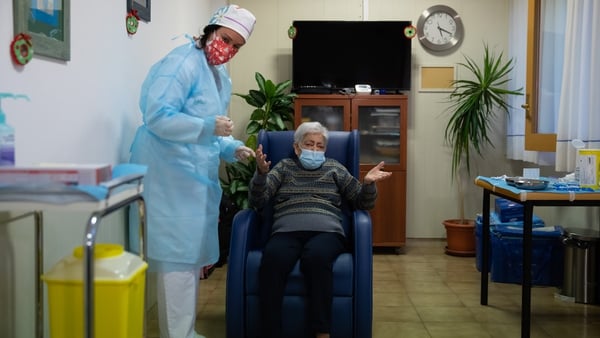