The Taoiseach has said "truly enormous damage can be done" if the public lets its guard down now, despite the arrival of the Covid-19 vaccines.

Speaking at Government Buildings after today's Cabinet meeting, Micheál Martin said we have responded well to the different phases of this pandemic, but we may now be entering the most challenging phase of all.

The Government has tightened restrictions on education, retail, construction and travel, following stark warnings by health officials about the path of the new strain of the virus.

Schools will close and move to online learning, but Leaving Certificate students will be allowed to attend three days a week.

Most childcare services must close, but there are exceptions for vulnerable children and the children of essential workers.

All non-essential construction must close, with some exceptions.

All passengers from Britain and South Africa must present a negative PCR test for Covid-19 on arrival into Ireland.

Mr Martin said personal responsibility and behaviour are key to getting through this.

He paid tribute to Mariter Tarugo, a healthcare worker at St Vincent's Hospital in Dublin who passed away on Christmas Eve after contracting Covid-19.

Each of us "has a responsibility to do right by her" and all of those working on the frontline, he said.

"We should all have the strength and discipline to hunker down, to stay at home and to follow the rules to get this virus under control."

The vaccine is being distributed as quickly as it is being received, Mr Martin said, adding that he welcomes today's news that the Moderna vaccine has been approved.

He said they do not currently have a clear timeline for its roll-out.

"The AstraZeneca process is very important as well, in terms of this race and this battle against the virus," Mr Martin said.

"It gives us greater room for manoeuvre in terms of decision making and in terms of society."

He said the public health message that comes from knowing the new variant of the virus is in Ireland "will have to inform policy decisions by Government into the future, and the roll-out of the vaccine".

Cabinet has agreed to close schools from next Monday due to rising Covid-19 infections, but Leaving Cert students will be allowed to attend three days a week. | Follow live updates: https://t.co/4lpEx6orsV pic.twitter.com/AeO4FuyU6T

Tánaiste Leo Varadkar said we are facing a "really dark January", with the third wave likely to be "much worse than the first".

Roughly 6,800 swabs have tested positive for Covid-19 in Irish labs in the past 24 hours, he said, which is a positivity rate of about 25%.

"This is bad," Mr Varadkar said. "It's getting worse, and we're only beginning to see the impact on our hospitals."

He said about 35,000 people will be vaccinated this week, rising to 40,000 next week, adding that this will increase when additional vaccines become available.

Mr Varadkar urged people to protect nursing home residents and staff, saying: "We have to slow the virus down so we can get the vaccine to them before the virus gets to them.

"January will be the month that we stay in," he said, adding that we are "not going to be out of the woods" by the end of the month.

PUP and other supports to remain until at least the end of March | Follow live updates: https://t.co/MO56HKlpOK pic.twitter.com/BeUz7dgu5h

Also speaking at this afternoon’s press conference, Minister for Education Norma Foley said she was "very conscious" of the need to deliver the traditional Leaving Certificate in June, adding that the education sector has shown "outstanding generosity and goodwill".

She said all data between August and December last year showed that schools are safe environments, but there is a need to reduce movement and contacts in society.

The Taoiseach said we know from last year the "huge difficulty" in developing an alternative to the Leaving Cert, which he said is hugely important for this generation of students in terms of their life chances and future career pathways.

He said the Chief Medical Officer was clear in his letter to the Minister for Health that a full reopening of schools would create "a considerable risk" at a time of very high levels of community transmission.

Mr Martin said the message from Dr Tony Holohan last night was that the growth of Covid-19 is very rapid, but the introduction of these measures will "turn the corner for us" in terms of community transmission.

Speaking later on RTÉ's Six One News, Mr Martin said the overall objective of the restrictions announced today is to reduce mobility and the movement of people in order to suppress the virus, reduce the pressure on the health service and to reduce illness and mortality.

He said there are two real weapons to deal with the current levels of the disease, individual behaviour, which can work very effectively in stopping the spread of the virus, and the roll out of the vaccines.

The Taoiseach said the Government would consult with all the key players in public health and would assess the situation again on 30 January.

However, she criticised the Government for not making the adequate preparations on childcare and education.

She said she had seen no evidence to reassure her that it was safe for Leaving Cert students to return next week.

Ms McDonald said it appeared the decision to allow students to come back for three days a week appeared to have been taken with minimal consultation with stakeholders or clear advice from NPHET.

She said she was very alarmed by the decision.

Meanwhile, gardaí are beginning intensive policing operations to ensure compliance with the measures announced this evening.

There will be an increased number of static checkpoints on national roads, as well as additional garda patrols in scenic areas.

More office-based gardaí will be deployed to frontline duties, while 70 trainee gardaí are being sworn in as full time members, and 60 reservists will also be deployed. 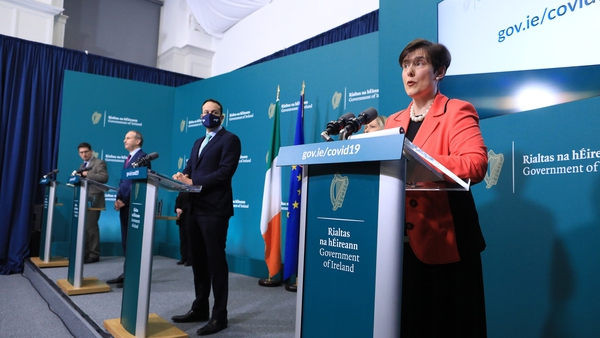