Young people have had to shoulder a huge burden during the pandemic, Dr Tony Holohan has told RTÉ's The Late Late Show.

The Chief Medical Officer said that as the parent of two children aged 18 and almost 20, he knew how the lives of that age group had changed in "every way".

He said all the things they looked forward to, from being with friends in college, to going to pubs and nightclubs and dating, had been affected.

"The lives of people in that young age bracket have changed in almost every way," Dr Holohan said.

His comments come as laws enabling gardaí to break up house parties take effect this weekend after it was passed by the Oireachtas.

Dr Holohan also said he "did not anticipate" giving advice that schools should not reopen after the mid-term break.

He was asked how his relationship was with Leo Varadkar following the Tánaiste's comments on Claire Byrne Live that the National Public Health Emergency Team's recommendation to move to Level 5 "had not been thought through".

"Very good - I get on well with the Tánaiste and the Taoiseach," he replied. "I know them well as I worked with them both when they were ministers for health."

Questioned about the festive season, the Chief Medical Officer said: "Yes, I do think Irish people can look forward to a decent Christmas." 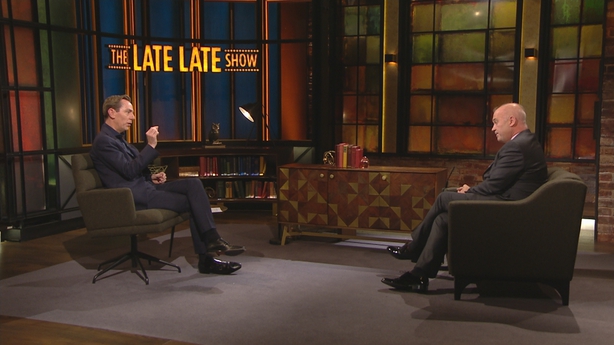 Dr Holohan said this depended, however, on getting the R number back down.

He said: "Six weeks can seem like a long time and it is, but if we got down to the low levels that we saw in the springtime - we can change the situation quite quickly. There is good reason to be optimistic if we can do that.

"We don't want to be in a situation where we have to ask people to restrict doing things they hold dear at Christmas but it will have to be a different one to last year."

He said the ECDC had reported how "pandemic fatigue" was now affecting populations. "It is very understandable. People are fed up of people like me coming out with bad news all the time."

Chief Medical Officer Dr Tony Holohan has young people have shouldered a huge burden during the Covid-19 pandemic, and they have missed out on all the things they look forward to like college, travelling, dating and nights out | #LateLateShow | Read more: https://t.co/dyteeuwXIw pic.twitter.com/HdpWT5LnLw

HSE chief executive Paul Reid took to Twitter to "give everyone some encouragement and hope" about the pandemic in Ireland.

"Always reluctant to declare a trend. But for the last 7 days we've seen the positivity rate from testing reducing marginally each day. From 8.9% to 5.8%. One way or another, I hope it gives everyone some encouragement and hope," he wrote.

Always reluctant to declare a trend. But for the last 7 days we've seen the positivity rate from testing reducing marginally each day. From 8.9% to 5.8%. One way or another, I hope it gives everyone some encouragement and hope. #COVID19 @HSELive

Tánaiste Leo Varadkar said while it is "too early to know for sure", the reduction in the positivity rate was "encouraging".

Earlier, the Chief Medical Officer urged people who have tested positive for Covid-19 to self-isolate for the full 10-day period.

His comments followed the notification of a further seven coronavirus-related deaths and 777 new cases of the disease to the Department of Health.

It brings the total number of cases since the outbreak began to 55,261, while there have been 1,878 Covid-related deaths.

Dr Holohan said self isolating means staying at home and staying away from other people, including those in your household.

There are 319 Covid-19 patients in hospitals, while the number of people in ICU remains unchanged at 37.

The remaining 387 cases were spread across 21 other counties.

.@CMOIreland Dr Tony Holohan offers some hope for what he thinks we can achieve with a six-week lockdown.#LateLate pic.twitter.com/1EQMvlC2r2

Two-thirds of the cases were in people under the age of 45, with the median age of positive cases reported as 33.

People who live with a person who has tested positive, or people who have been told they are a close contact of someone with Covid-19, must also restrict their movements for two weeks.

Dr Holohan also reiterated an appeal to everyone behave as though they are a close contact.

"Stay at home, other than for essential reasons," he added.

Five further deaths from Covid-19 in the past 24 hours were announced in Northern Ireland. It brings the death toll there to 639.

"I do not anticipate we'll be giving any advice that would lead to schools closing after the midterm".@CMOIreland Dr Tony Holohan discusses NPHET's current view on schools. #LateLate pic.twitter.com/bcAcK6rxKt

Meanwhile, the risk of someone being exposed to Covid-19 in Ireland is 100 times higher than it was in June.

Public health officials are urging people to stay at home during Level 5 restrictions and to isolate or restrict their movements appropriately if they test positive for the virus, have symptoms or are a close contact of a confirmed case.

On Thursday, the 14-day incidence rate of Covid-19 here exceeded 300 for the first time since the pandemic began.

Back in June, this number was just three cases per 100,000 of the population, making the risk of infection 100 times greater now than it was four months ago.

Health officials say the virus is everywhere but is concentrated in cities, their surrounding areas, and border counties.

Health officials say the goal of Level 5 measures, which is to reduce this down to an R number of 0.5 in the next six weeks, is realistic.

Laws on house parties could take effect this weekend