Northern Ireland is unlikely to alter its Covid-19 strategy despite the gear change by authorities in Dublin yesterday.

Northern Ireland has one of the highest infection rates in Europe with a reproduction rate between 1.4 and 1.8.

The number of cases in the last two weeks per 100,000 population is more than double that of the Republic of Ireland.

But it seems set to stick with the strategy announced by Northern Ireland's power-sharing Executive last week which allows the retail sector to remain open even though the opposite will happen south of the border from tomorrow night for a six-week period.

They advise Northern Ireland’s Health Minister Robin Swann and regularly feature in discussions with the First and Deputy First Minister Arlene Foster and Michelle O’Neill and other members of the Executive including Finance Minister Conor Murphy.

As a result of discussions among the advisors and the politicians, Northern Ireland’s power-sharing Executive announced a range of initiatives last week.

The most significant new restrictions included closing the hospitality sector for a four-week period and requiring all schools to close for a two-week period which incorporates the scheduled one-week midterm break.

However, the Executive decided in the deliberations to allow shops and other retail outlets to remain open.

The members of the power-sharing administration have taken a calculated gamble.

They hope that by targeting household interactions and social contacts and by appealing to the general public to re-commit to social distancing practices that worked early this, the crucial R rate and other important indicators will begin to fall.

At a media briefing this afternoon both Dr McBride and Professor Young said there is some encouraging new evidence from the worst affected area: Derry and Strabane.

For weeks it was returning some of the highest infection rates in Europe.

The authorities implemented restrictions there in an effort to address the problem. 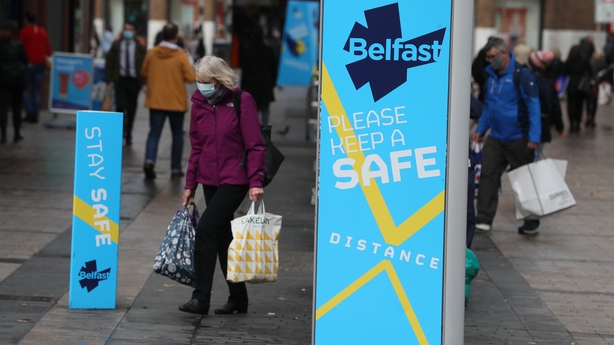 In recent days there are indications that the measures are having an impact, including public buy-in, even though the infection rates remain high.

Despite having lower infection rates than Northern Ireland, the Micheál Martin-led coalition has decided to bring in what amounts to a package of more severe restrictions.

The numbers of workers who will lose their jobs will be significantly higher south of the border because the government-ordered closures will close the retail sector.

The period for increased restrictions is also longer at six weeks in the Republic of Ireland and four weeks in Northern Ireland.

The Pandemic Unemployment Rates in the Republic of Ireland will also be higher with many of those affected receiving €350 per week. 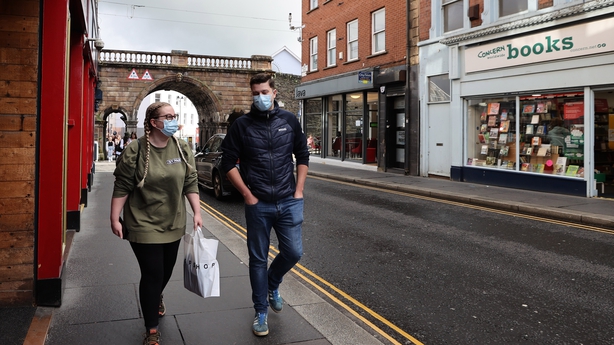 The full details of what Northern Ireland workers will receive are not yet available.

It will be a mix of the two-thirds-of-wage scheme put in place by the British government with the possibility of some small top up from Stormont.

The current UK scheme on offer is less than what was available during the first phase of the lockdown.

This is one of the main points of argument between Boris Johnson's government and regional leaders such as the Mayor of the Greater Manchester Area, Andy Burnham.

The authorities in Belfast say their testing rates compare favourably to the statistics from south of the border.

The latest Northern Ireland figures state that its seven-day testing rate is 29 per 1,000 people compared to around 20 in the Republic of Ireland.

By that date there should be sufficient evidence to indicate if the strategy - less severe than what is in place south of the border - is working.

The most striking feature of the Northern Ireland model is the balance struck between health, economic and political considerations.