Seven new cases of coronavirus have been confirmed in Ireland, including one patient who had not travelled to an affected area.

The total number of cases across the country now stands at 13. A further three cases have been reported in Northern Ireland.

Chief Medical Officer at the Department of Health Dr Tony Holohan said the country remains in the containment phase, but warned it was a "rapidly evolving situation".

Four of the latest cases are travel related from northern Italy, involving four males from the east of the country.

Two are associated with close contact with a confirmed case and involve two females in the west of the country.

The seventh case is a male, who the Department of Health has described as being "associated with Cork University Hospital" and is the first case of community transmission.

A risk assessment is under way at the hospital.

It is believed the patient has an underlying medical condition and it is understood he had not been in northern Italy or any other affected region.

Department of Health briefing on Covid-19, as seven new cases of #coronavirus are confirmed | https://t.co/WnTDECq61P https://t.co/6Ii0tjVEOT

Dr Holohan said they could ascertain how all of the new cases were infected, apart from the case at CUH.

He said that as part of that person's diagnosis, their contacts were examined by the public health team and they have not been able to establish a travel connection to the virus or a connection to an already confirmed case of infection.

Health authorities are trying to trace patients and healthcare staff at the hospital who may have been in contact.

A crisis management team has been established at CUH and they have closed the hospital to visitors, cancelled elective work and asked some staff to stay at home and self-isolate.

Contract tracing is under way at the hospital and Dr Colm Henry, Chief Clinical Officer at the HSE, said patient safety is an absolute priority.

Dr Holohan said health officials are "not alarmed" by the fact there has been community transmission, saying it is what the department had expected and that it matches the patterns seen in other countries.

Earlier, it emerged a healthcare professional was among one of the previous confirmed cases, in the west of the country.

The male is a member of a family group of four who had recently travelled to northern Italy, which has been the hardest hit region in Europe.

The HSE said today that the process of tracing close contacts of the infected family group is well under way. 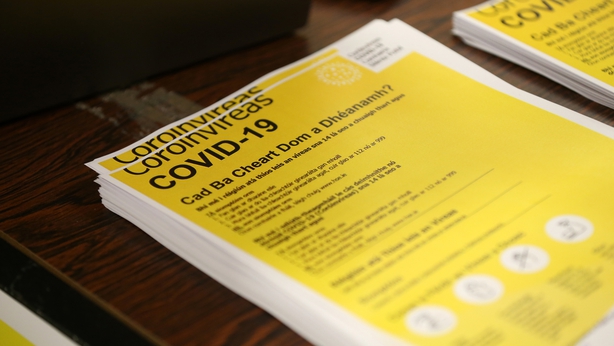 It is understood this includes contacting patients who may have come in contact with the healthcare professional as part of his work.

Contact tracing has also been made slightly more complicated because of the number of people who travelled in the family group.

A small number of schools in the region were closed today as a result.

HSE Director of Public Health Dr John Cuddihy said that when healthcare workers return from higher risk areas they are advised to stay out of work for 14 days and should self-isolate.

If they return from other areas where Covid-19 is presented, then they are advised to contact the HSE, which will remain in contact with them.

Earlier the HSE chief Paul Reid said it would be a challenge to maintain Ireland's containment phase and the health service was preparing for further phases.

The executive also said that "many people" had been asked to self-isolate for the protection of public health and it expected that the virus "will be spreading within our communities within weeks".

Speaking at a HSE weekly briefing in Dublin, Mr Reid said there had been sustained transmission of the disease in other countries, especially in Europe and the UK.

He said that members of the public needed to treat the outbreak of the disease very seriously.

Mr Reid said that an extra €20m investment will be used to add to ICU capacity in hospitals, with the winter beds capacity also extended to help ease the pressure on the system.

The money has been spent on equipment to treat people who have contracted the virus.

It includes extra ventilators, four-and-a-half million gloves, and almost five million masks. It will also help with the distribution of 13,500 kits for GPs.

CEO @paulreiddublin says the HSE has invested at least €20m in purchasing equipment to respond to #Covid-19. He says 13,500 kits have been distributed to GPs, including four and half million gloves and almost five million masks | rte/ie/news/coronavirus | #coronavirus #isl pic.twitter.com/Lxs2rzGJrb

Guidelines on mass gatherings will be published tomorrow after a stakeholder forum discusses them.

The Department of Health will also meet patient advocacy groups to discuss the needs of vulnerable patients.

This morning, Minister for Health Simon Harris said the HSE was identifying extra isolation and ICU facilities and more funding would be available.

However, he added that not all patients would require hospitalisation.

Mr Harris said all hospitals had isolation facilities with a national centre at the Mater Hospital in Dublin.

He said that so far there had not been significant use of ICU beds across the EU.

He said a paramedic will "carry out a few tests in someone's home" with one focused clinical assessment.

He/she will assess someone's capacity to self-isolate, they will be given an information pack, and a swab test will be carried out.

HSE Consultant in Public Health Dr Sarah Doyle said that even those with very mild symptoms will have to self-isolate if Ireland moves into the next phase of the virus.

She said that everyone needs to think about the potential impact that this will have on their daily lives.

Dr Doyle said: "As we move into the next phase, we will be saying everybody, even those with very mild symptoms, will need to be self-isolating.

"So people may feel fit to go to work, but they are at risk of spreading infection. So workplaces and each and every one of us need to think about what that means for us."

"Many people" have been asked to self-isolate, the HSE confirms | https://t.co/7tJXaAh2tB #covid19 #coronavirus pic.twitter.com/t7tHuRWBUa

In relation to schools and mass gatherings, Dr Doyle said: "Everyone needs to think about how this will impact.

"In their schools and their work, people need to think about what they can do within those settings to prevent the spread of infection. The only way we can protect ourselves is by protecting all of us."

She added: "An institution would not necessary have to be closed on the basis of contact tracing. It would depend on the case and the type of contacts that they have had."