Medical scientists are to go on strike later this month in a dispute over long-standing pay and career development issues.

A one-day work stoppage will take place between 8am and 8pm on Wednesday 18 May with further strikes threatened if no progress is made in the dispute.

Routine laboratory services will be withdrawn, which will affect hospital and GP services.

The medical scientists' trade union, the Medical Laboratory Scientists Association (MLSA), says the notice of industrial action follows an unsuccessful latest round of talks with the government.

The union had earlier served notice for industrial action on 30 March but this was suspended after it was invited to new talks under the dispute resolution mechanism of the Building Momentum public service pay agreement.

The MLSA says no satisfactory outcome has been achieved in recent weeks and the union has today served notice to now proceed with the action.

"The latest failure by the HSE and Department of Health to put forward any proposal has added insult to injury," said MLSA Chairperson Kevin O'Boyle

"The MLSA withdrew notice for strike action on March 30th in good faith, yet the employer side has offered nothing to address our issues, causing further anger and frustration among our membership," he added.

The union is seeking pay parity with scientific colleagues who work in biochemistry laboratories saying they are paid on average 8% less, with fewer promotional and career development opportunities and less support for training and education.

The MLSA says there is an ongoing significant national shortage of medical scientists across the public health service due to inferior pay and conditions, poor career structure and limited promotional opportunities.

The union says its door remains open to any meaningful approach or solution which could avert the action. 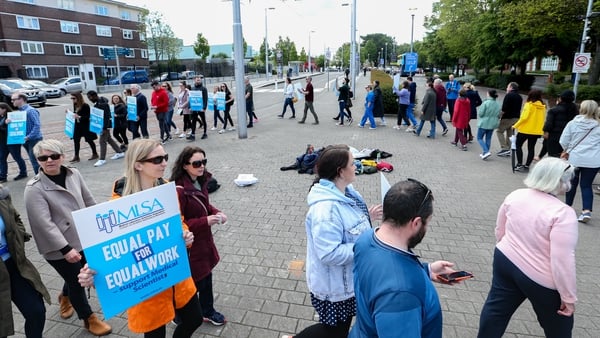 Thousands of procedures cancelled due to strike action