Sometimes banks run short of money. They are not supposed to, of course. But from time to time it happens. So how would 100 of the biggest banks in the Euro Area fare in the event of a liquidity shock (as bankers prefer to call running out of money)?

The ECB will find out this autumn, as its regulatory wing the Single Supervisory Mechanism (SSM) is running a mini stress test to see how robust banks are to the money drying up.

The main "output metric" of the test will be the "survival period" - how many days a bank can continue operating using available cash and collateral with no access to funding.

And of course there is a Brexit angle.

One of the interesting features of the test, particularly from an Irish point of view, is the assessment of a bank groups intra-group liquidity flows, including "those denominated in a non-euro currency".

For Bank of Ireland and AIB - which have sterling-zone branch networks - this may be of particular interest.

But it also covers dollar holdings of cash. And it's not just AIB and Bank of Ireland that have significant foreign currency exposure.

Two other big banks now appear on the ECB’s list of Significant Institutions that it directly supervises - Bank of America Merril Lynch and Barclays Bank Ireland - both of which would be expected to have significant foreign currency holdings.

A part of the test is to see how these banks would survive (or not) if the foreign exchange market closes to them. It's not a direct Brexit link, but the test period is the six months from December 31 2018 - and Brexit happens half way through. (Hopefully this remains a hypothetical test).

At least we assume these banks will be tested.

When we contacted the ECB to check if the five Irish banks on their Significant Supervised Entities list (as updated last December – 119 banks) will be included in the test, the ECB said it is not disclosing at this stage the list of participating banks, other than saying it will be around 100. 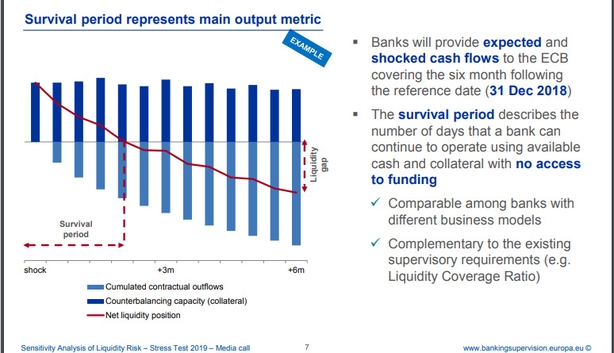 Some caution is understandable - we are talking about a liquidity test after all and what could happen to a bank that is deemed to have "failed" the test?

If the results are known only to the regulator and the bank concerned (they will be spoken to as part of the ongoing "regulatory dialogue"), then quiet moves can be made to improve the banks resilience.

But if the results were public, they might be misinterpreted, which in the worst case could mean setting off the very thing they want to avoid – a bank run!

The SSM has not decided how it will handle publication of the results at the end of the year, but it is hard to believe the banks will be screaming for full disclosure.

After all, the exercise is based on real world examples (about ten of them, apparently) observed by the SSM over the past few years, but largely unknown to anyone beyond the regulators and the banks concerned.

And the banks are supposed to have a sufficient reserve of high quality liquid assets to allow them to survive a period of "significant liquidity stress" lasting 30 calendar days (under a requirement called the Liquidity Coverage Ratio).

So it is time to put the LCR to the test and see how individual banks would shape up in the face of a made up shock scenario.

The hypothetical shock simulates cash outflows from retail and commercial deposits from banks, and a full freeze of wholesale funding (so they can’t borrow to cover their commitments).

At the same time the banks would face ratings downgrades (by three notches), and additional withdrawals of committed funding lines.

And just to really squeeze till the pips squeak, the banks are unable to generate cash from deleveraging commercial lending activities (by e.g. selling loan book to vulture funds etc).

A bank's ability to withstand these shocks is driven by their "counterbalancing capacity" - the amount of liquidity they can generate instantaneously based on available collateral.

The test is of each bank's ability to handle an "idiosyncratic" liquidity shock.

In other words, it is a simulated shock that only applies to that bank ( such shocks in the real world are usually caused by a collapse of trust in an individual institution – again a reason why there will likely be extreme caution around publishing these results).

The liquidity shock scenario will not be driven by any general macroeconomic or geopolitical scenario, and will not be linked to monetary policy decisions (an interest rate shock test was done in 2017).

Historical data shows that retail depositors can move "material" amounts of money out of banks, but corporate clients are the real speed machines when it comes to bank runs.

The data also shows that its hard for banks to deleverage quickly in response to a shock. (And past liquidity events have tended to last on average between four and five months).

This "asymmetric impact" on assets and liabilities leads to the cash squeeze: the test aims to measure the life expectancy - in days - of banks facing a squeeze like this.

It is a pretty horrible test.

So what will the SSM do with the information it gathers (the real point of this exercise)?

Well it won't change the capital and liquidity requirements "in any mechanical way", according to the SSM.

It will feed into the SSM’s ongoing assessment of of banks liquidity risk management frameworks.

And the SSM says it will perform "deep dives" into some aspects of bank’s liquidity management, such as their ability to mobilise collateral and the exposure to liquidity mismatches in individual currencies. The Euro-Sterling rate will be the one of most interest here in Ireland).

The SSM says it will make a decision in Q4 about publication of the results. But don’t be surprised if its notably short on details - like names of banks.