The Nevin Economic Research Institute says the dominance of the foreign owned multinational sector in Ireland has concealed weaknesses in key parts of the domestic economy, particularly in information technology.

It also says the domestically-owned economy is over-reliant on low productivity sectors like hotels and restaurants.

New research from the Nevin Institute looking at labour productivity says the performance of foreign-owned multinational companies here is very strong, and bolsters the republic's overall performance when compared to Northern Ireland and EU 15 economies.

This raises questions about the level of spill over benefits to this sector, despite the presence here of some of the biggest technology firms in the world.

The trade union-backed institute also questions the wisdom of using State supports and tax break to grow the hospitality sector, which could have been used to support higher productivity - and higher wage - sectors.

The Nevin Institute also says the goal of creating an all-island economy has not been realised, and Brexit is likely to make that task more difficult.

In "Productivity on the Island of Ireland - a tale of three economies", NERI economists argue that the divide in productivity between foreign and domestic controlled enterprises conceals weaknesses in the Republic.

This leads to three relatively distinct economies on the island - a foreign dominated RoI (Republic of Ireland) economy, a domestic RoI economy and the Northern Ireland economy.

The research points to a significant gap in labour productivity between Northern Ireland and the Republic, with RoI productivity far outpacing that in the North.

And while productivity in the Republic has improved relative to the EU 15 states since the start of the century, this has not been the case for Northern Ireland, which has had a consistently negative gap compared with the EU 15.

The Republic is heavily dependent on Foreign Direct Investment.

With most of the jobs concentrated in the domestic sector, this points to a big divide in labour productivity hidden in the aggregate statistics.

It underperforms relative to the EU 15 in Information and communication and real estate activities. However the institute says it appears that tax planning upwardly distorts productivity in the administrative sector, mainly in rental and leasing activities. 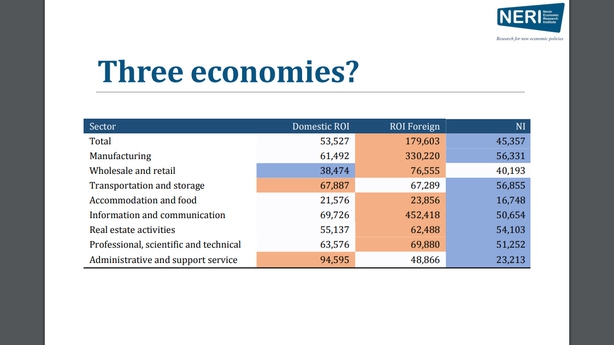 Today's report says the Northern Ireland economy comes in below the Republic's economy for all sectors except Wholesale and Retail activities.

"The underperformance of the Retail sector in ROI compared with NI shows that in terms of the largest sector of the domestic economy, ROI is actually the weaker region. Greater levels of competition in the UK and NI may be a factor in this regard," the Nevin report states.

The report is particularly concerned with lower than hoped for spill over effects from the foreign multinational sector in both jurisdictions. This is particularly pronounced in Northern Ireland.

It says the question of management capacity is a recurrent weakness in studies of the NI economy, but says it is also a factor in domestic ROI firms.

The most important factor it says is the absorptive capacity of firms - the ability of existing firms to take advantage of the growth opportunities Foreign Direct Investment bring. Again, Northern Ireland does worse on this measure.

NERI points to evidence that lack of skills, and the view that the NI economy may be incapable of co-ordinating skills demand and supply to meet the opportunities of Foreign Direct Investment.

It says that the true value of FDI includes not just how many jobs it creates, but also the spill-over effect it creates - and the ability of local firms to take advantage.

The report also looks at the performance of "sub-regions" on the island of Ireland - five in NI and nine in the Republic - measured by Gross Value Added per capita. 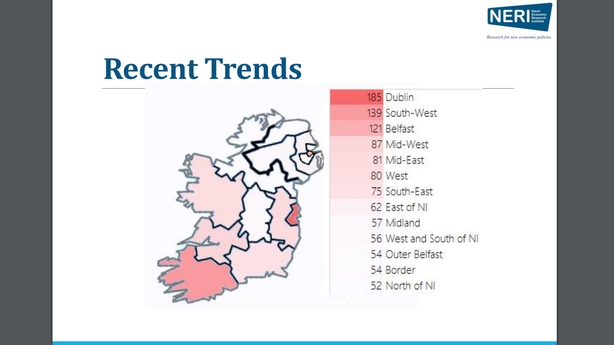 It finds that Dublin leads the way, followed by Cork then Belfast - the only NI sub region in the top half of the table.

GVA per capita weakness is revealed as a cross border phenomena - with the Border region of ROI and Outer Belfast having the same GVA per capita. The weakest performing area is the North of Northern Ireland - which includes Derry.

COP26: Failure is not an option