The Budget has been met with mixed reaction from political parties with Sinn Féin labelling the measures as a return to the "boom and bust politics of the past".

Fianna Fáil said the Government would be judged on how it tackles the scourge of homelessness while the Independent Alliance branded today's figures as a "fair and progressive step forward".

Speaking in the Dáil, Sinn Féin's finance spokesman Pearse Doherty said that a lie was at the centre of Budget 2018.

He said: "It is a lie that you promote, that you can promise to fix the health service and the housing crisis while at the same time cutting people's taxes.

"Those who support this budget knew it was a lie, the same lie you tried to spin last year."

He said there was the equivalent of the population of ten counties languishing on hospital waiting lists, with people in chronic pain "waiting and waiting for operations".

Pearse Doherty: Budget 2017 delivered increased homeless people and this year the Government have proposed more of the same pic.twitter.com/1ZzSZ1w6AO

"Fine Gael, Fianna Fáil and their independent friends have told us that now is the time to return to the boom and bust politics of the past" he said.

Mr Doherty said that it says something of what the Government intends to achieve when its main aim is to balance the books. 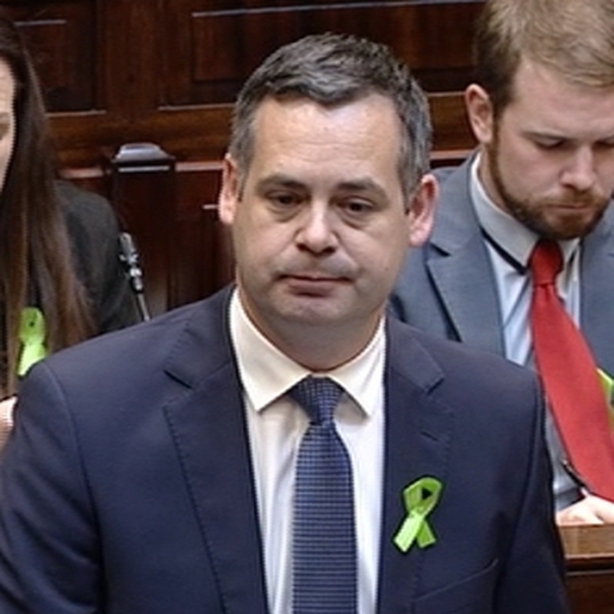 "Because minister, if you got this you won't come in here and prioritise tax cuts, because every cent you put into tax cuts is money you take away from fixing our health service and on delivering homes."

Mr Doherty said Sinn Féin would not stand over these choices describing them as a "disgrace that Fianna Fáil and Fine Gael have cobbled together".

Budget will be judged on how it tackles homelessness - McGrath

Fianna Fáil's spokesman for finance has said that Budget 2018 marked progress on many of the key priorities set out in his party's confidence and supply agreement with the Government.

Michael McGrath said the Budget and the Government would be judged on how it tackles the scourge of homelessness.

He welcomed increases in tax credits for the self-employed, extra funding for the National Treatment Purchase Fund, and the Housing Assistance Payment scheme.

He said that following the last general election, his party was the only opposition party to recognise that it had a responsibility to ensure the country had a Government.

Fianna Fáil, he said, has sought to influence the Budget, and that means prioritising public services and investment in the economy.

He said his party had achieved this with the 2:1 split on spending to tax cuts.

Mr McGrath told the Dáil: "Were it not for our involvement I do not believe this budget would have such a mix."

Michael McGrath: This budget and this Government will be judged on how it tackles homelessness and the housing crisis #Budget18 pic.twitter.com/Wo2xvykPh6

However, he did say that there were a number of cautionary notes to be struck.

He said the increase on stamp duty on commercial property transactions is forecasted to yield €325m in 2018.

He said: "The impact of this change in stamp duty will have to be carefully monitored."

He said that the Government's forecast over the stamp duty was "one very big assumption underpinning the budget numbers."

"I would like to know what is behind the assumption," he said.

He described as "modest" the €5 increases in welfare benefits, but said they were welcome.

Mr Martin said Fianna Fáil is concerned that there was not enough emphasis in the budget on a national affordable housing scheme.

He said there are two big scars blighting society - housing and homelessness and healthcare waiting lists for children.

Independent Alliance say this is a 'turnaround budget'

The Independent Alliance described today's Budget as a "fair and progressive step forward".

The Independent Alliance Minister Shane Ross has said this is a turnaround budget.

At a press conference this afternoon, Minister of State Finian McGrath said the Independent Alliance's fingerprints were all over the Budget.

The Alliance pointed to the Christmas bonus, the reduction in prescription charges, the increased funds for home care and disabilities, and incentives for employers to hire people over the age of 55.

While Minister of State John Halligan said the €149m increase in funding for Housing assistance payment was significant.

Meanwhile, Michael Healy-Rae of the Rural Independent Group has expressed his opposition to the introduction of a sugar tax.

Speaking in the Dáil, the Kerry TD described it as another unwanted burden of taxation on families. He also said he did not think it would make a difference.

Dáil hears opposition to sugar tax and rise in the cost of cigs from Michael Healy Rae. #Budget18 pic.twitter.com/Aqpb4wyUpa

Mr Healy-Rae also expressed his opposition to the rise in the cost of cigarettes, saying that it was a freec country and those who wished to smoke were entitled to.

He also questioned why the Minister for Social Protection did not re-introduce the death grant. He said people who have experienced death have unprecedented bills they cannot afford to pay.

Coppinger says Budget gives nothing back to ordinary workers

The Solidarity/People Before Profit TD Ruth Coppinger has said Budget 2018 gives nothing back to ordinary workers.

Speaking on RTÉ's Budget 2018, Ms Coppinger said somebody on €20,000 will get €1 a week more after today's announcement.

She said this government's budget will not "give ordinary workers a recovery, if we want to get back what was taken in the last ten years it will actually have to be fought and organised for."

"They've also announced that you'll be hit with stamp duty if you announce that within 30 months you'll build on land that you've bought - 30 months? What sign of an emergency is that? We need housing built by local authorities," she said.

She added: "They're also going to use NAMA and the Irish Strategic Investment Fund on more of a partnership with the private sector. It will not lead to affordable housing for most people in the lists."

The leader of the Labour Party has said Budget 2018 lacks a core policy message.

Speaking on RTÉ's Budget 2018, Brendan Howlin said it spreads a little across everybody, but no attempt has been made to address the real issues of concern to the people of Ireland.

He said it is a "stand still" budget.

Mr Howlin said the Government is disregarding the possibility of reform in health by not addressing Sláintecare - a set of proposals by the Future of Healthcare Oireachtas Committee. The proposals set out a ten-year strategy for health care and health policy in Ireland.

Mr Howlin said both Fine Gael and Fianna Fáil have abandoned the "only real policy initiative accepted by everyone in the current Dáil."

In relation to housing, Mr Howlin said not "a single additional house has been announced."

The party's finance spokesperson, Joan Burton, described the budget as a "damp squib".

Speaking on RTÉ's Six One News, she said she was disappointed that for a second year in succession, the Government decided not to improve child benefit.

She said the fact that the social welfare increase will only be paid at the end of next March effectively means that the weekly increase will be €3.85, rather than the €5 headlined by the Government.

The party's spokesperson for the environment, community and local government described the budget as "the cup of coffee budget".

Alan Kelly told the Dáil that it is a negative budget for people with families with children who are facing excessive costs and are commuting into Dublin.

Mr Kelly described the tax changes as regressive and said there is an over reliance on commercial stamp duty, which he equated to "a Charlie McCreevy cup of coffee".

#Budget18 is a cup coffee budget according to @alankellylabour pic.twitter.com/q2EhKKbpda

The joint leader of the Social Democrats, Róisín Shortall has said that in relation to the housing measures, "there's far too much carrot and not enough stick".

She said there was no affordable housing scheme announced and nothing done in relation to rent.

She said: "Much has been said about the tax package - there's this ongoing spat between Fine Gael and Fianna Fáil, but if you look at the detail of that, we know that the majority of income earners are earning less than €35,000 a year and the measures in today's budget do nothing whatsoever for them."

She said she thinks the Government has been very unwise in relation to its approach to the budget:

Ms Shortall said: "They shouldn't have concentrated on spending so much money on cutting tax for the better off - that brings no benefit to the majority of workers.

"Everybody would have been much better off if the Government had concentrated on reducing the cost of living."

He was critical of the way there is no plan for affordable housing in the Budget and said the Budget does not go far enough.

He pointed out that if a site is farmed, even if it is given to a farmer to farm for nothing, the land is then in use and it will not be subject to tax.

"You couldn't make it up," added Mr Wallace.