The Northern Ireland Protocol was agreed in 2019 to help seal the post-Brexit divorce deal between Britain and the European Union.

It is a trading arrangement aimed at preventing the return of a hard border - complete with checkpoints and cameras - in Ireland following the Withdrawal Agreement.

Here is a refresher on some of the main aspects of the protocol.

What does the protocol entail?

London and Brussels essentially agreed to move new regulatory and customs processes to the Irish Sea to avoid disrupting trade along the politically sensitive border.

That meant checks on trade between Britain and Northern Ireland, rather than on goods moving north and south within the island of Ireland.

Since 31 December 2020, a range of regulatory animal and plant safety checks have been in operation, including physical inspections for a proportion of freight arriving at Northern Ireland ports.

How does the protocol work?

While the rest of the UK has left, Northern Ireland has remained in the EU single market for goods and applies EU customs rules at its ports, even though it is still part of the British customs territory. 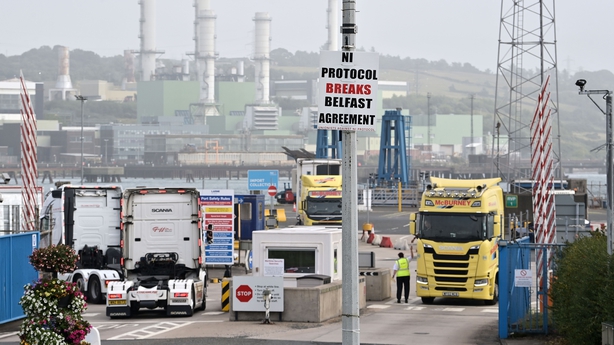 Is the protocol fully operational?

No. Late last year the UK and EU agreed a range of grace periods designed to reduce the level of Brexit bureaucracy in the initial months of operation.

While a range of new checks and processes have been applied since January, those would be dwarfed in scale by the volume of red tape anticipated if the exemption periods ever lapse.

Northern Ireland's chief vet has warned that if the grace period limiting the checks on supermarket agri-food goods was to end, the region would have to process the same number of vet-approved export health certificates as the entire EU does in total each year.

Stormont's health minister has also warned about the potential for medicine shortages if new rules come into effect that restrict Northern Ireland's ability to access supplies from Great Britain.

Political discord over the protocol has seen grace period exemptions extended several times, on occasion with EU agreement but mostly as a result of unilateral action by the UK.

In the latest UK solo run, the government declared an indefinite extension of all the exemptions while it sought to secure permanent changes to the protocol.

So what is the so-called 'sausage war'?

It relates to just one aspect of single market rules that apply to Northern Ireland under the arrangements - the prohibition on chilled meats.

Under EU rules, the import of such products from third countries is banned.

That means Northern Ireland faces the prospect of being unable to import GB sausages and other chilled meats on the prohibition list.

The ban has not come into effect, as trade of chilled meats is covered by one of the various grace periods that the UK has unilaterally extended indefinitely.

However, it is already a challenge to find British sausages on shelves in Northern Ireland, as many retailers have adjusted their supply chains in anticipation of the ban.

Who is unhappy about the protocol and why?

Businesses who move goods from GB to NI have been saddled with added costs and reams of new red tape.

Many traders have encountered problems shipping goods across the Irish Sea. In the early weeks of 2021, this was evidenced by depleted supermarket shelves in Northern Ireland.

Politically, unionists and loyalists are furious as they believe the arrangements have driven a wedge between the North and the rest of the UK.

They want British Prime Minister Boris Johnson to trigger Article 16 to unilaterally suspend aspects of the protocol's operation in order to enter fresh negotiations with the EU.

What exactly is Article 16?

Article 16 is an emergency mechanism within the Northern Ireland Protocol.

It allows the EU or UK to act unilaterally if either side considers the protocol to be causing "economic, societal or environmental difficulties".

They could then introduce safeguard measures - and these measures must be notified to the other party "without delay" through the Joint Committee.

In January 2021, the European Commission signalled its intention to trigger Article 16 in response to a row with AstraZeneca over vaccine supplies.

It wanted to ensure Northern Ireland would not become a backdoor to allow the flow of Covid-19 vaccines from the EU to Britain.

The Irish government responded swiftly, with Taoiseach Micheál Martin saying it had been a "mistake" by the EC and Commission President Ursula von der Leyen expressing "deep regret" for the move.

"It is our responsibility to safeguard peace and prosperity in Northern Ireland and that may include using Article 16 if necessary," he told diplomats in Lisbon.

"We would not go down this road gratuitously or with any particular pleasure."

It comes amid a continuing stand-off between Britain and the EU over the role of the European Court of Justice in overseeing any disputes relating to the working of the protocol.

Why are they arguing about the European Court of Justice (ECJ)?

Under the terms of the protocol, the ECJ would be the final arbitrator on any future disputes between the UK and EU on the operation of the protocol.

In its July Command Paper on the protocol, the UK said it was time to "normalise" this oversight arrangement and replace it with an international arbitration model.

The British government said it only agreed to an ECJ role in the protocol due to the "very specific circumstances of that negotiation" as the UK pressed to get a Brexit deal done.

The ECJ issue has not featured significantly in the intense public and political debate over the protocol in Northern Ireland.

For instance, it is not mentioned explicitly in any of the seven tests the Democratic Unionist Party has set out to judge any proposed changes to the arrangements.

Sinn Féin has portrayed it as Brexit minister David Frost throwing a "dead cat" on the negotiating table.

The European Union will today announce significant changes to the way the Northern Ireland Protocol is implemented, which diplomats say will result in a large reduction in the number of checks and controls on goods moving between Britain and Northern Ireland.

Current DUP leader Jeffrey Donaldson has threatened to collapse the power-sharing institutions at Stormont within weeks if major changes to the protocol are not secured.

Sinn Féin, the SDLP and Alliance - who were all opposed to Brexit during the 2016 referendum - insist the problems being experienced in Northern Ireland are down to Brexit, rather than the protocol itself.

While acknowledging that issues with the protocol need to be addressed, they oppose any move to bin the arrangements entirely.

They also highlight the potential benefits of the protocol, in particular the unique status it gives traders in Northern Ireland to sell in both the UK internal market and EU single market without restriction.