The European Commission has said its proposals to ease the implementation of the Northern Ireland Protocol will cut checks and controls on a range of retail goods by 80%.

The proposals will also cut customs formalities on goods moving from Britain to Northern Ireland by half, and there will be new EU legislation to guarantee that medicines licensed in Britain can be freely circulated in Northern Ireland.

The measures were unveiled this afternoon by the EU's chief protocol negotiator Maroš Šefčovič, who is also Vice President of the European Commission.

He said the EU's proposals to change the protocol are a "direct and genuine" response to concerns raised.

He added: "We have listened to, engaged with and heard Northern Irish stakeholders, from political leaders to businesses and a cross-section of civic society."

Mr Šefčovič said the EU was proposing an "alternative model" for the protocol.

"We have put a lot of hard work into this package. We have explored every possible angle of the protocol and, at times, went beyond current EU law.

"In effect, we are proposing an alternative model for implementation of the protocol.

"On the other, robust safeguards and monitoring mechanisms should be put in place to make sure that they stay in Northern Ireland."

EU Vice President Maroš Šefčovič says the Commission is proposing a package of creative solutions, designed to help Northern Ireland deal with the consequences of Brexit. He dubbed it 'the package of enhanced opportunities'. | Read more: https://t.co/QOWserOlJC pic.twitter.com/AFdc1D8vHa

On medicines, Mr Šefčovič said the EU had turned its rules "upside down and inside out" to find a resolution.

He said the proposals on [sanitary and phytosanitary] SPS rules would "significantly ease" the movement of GB goods whose end destination was Northern Ireland.

Mr Šefčovič said the EU's proposals on customs were "ambitious" and would combine with the relaxations on agri-food checks to effectively create an "express lane" to greatly improve the facilitation of Irish Sea trade.

Today's recommendations are the EU's response to the UK government's so-called Command Paper, published on 21 July, which called for sweeping changes to the protocol.

A UK Government spokesperson said: "We are studying the detail and will of course look at them seriously and constructively.

"The next step should be intensive talks on both our sets of proposals, rapidly conducted, to determine whether there is common ground to find a solution.

"Significant changes which tackle the fundamental issues at the heart of the Protocol, including governance, must be made if we are to agree a durable settlement which commands support in Northern Ireland.

"We need to find a solution which all sides can get behind for the future, which safeguards the Belfast (Good Friday) Agreement, and which puts the UK-EU relationship on a stronger footing. We are ready to work hard with this in mind."

The Taoiseach welcomed the latest EU proposals as "the obvious way forward".

Speaking at Government Buildings, Micheál Martin said the EC was in "solution mode". He added: "The protocol exists because of the unique circumstances of Northern Ireland.

"It was agreed by the EU and the UK government, to protect the Good Friday Agreement, avoid a hard border on the island and maintain the integrity of the Single Market."

He continued: "I trust that it will now be the subject of serious engagement with the British government and form the basis of a jointly agreed solution to those challenges."

We propose a type of "express lane", facilitating the movement of goods from GB to NI:
🔹customs formalities for more businesses and goods cut in half;
🔹simplified certification and an 80% reduction of the checks for more retail goods for NI consumers.https://t.co/k8gvfKDwO7 pic.twitter.com/AcQwWAZBsm

Minister for Foreign Affairs Simon Coveney described the proposals as a "major effort" by the EU to address concerns raised around the protocol.

He said the European Commission had "listened to the concerns of the people of Northern Ireland" and addressed the "practical, genuine issues that matter most to them".

Read more
From agri-food to medicines: What's new in EU proposals
NI Protocol - What is it and why is it so controversial?

Officials have confirmed that pets will not be covered by the new proposals and that they will continue to require certificates if moving from Britain to Northern Ireland.

DUP leader Jeffrey Donaldson described the proposals as the EU's "starting point". However, he said that on first inspection they would appear to "fall far short of the fundamental change needed".

Mr Donaldson said his party will take time to study the detail and urged that future discussions are "not a wasted opportunity".

He added: "These proposals clearly fall a long way short of being the basis of a sustainable solution and are presented within the framework of a protocol that has failed.

"The proposals in the government command paper, in our view, are the best direction of travel to start creating sustainable arrangements for Northern Ireland.

"We have a window of opportunity to get this right. The prize for doing so will be great for both sides but most of all for the people of Northern Ireland who can break free from the protocol infecting day-to-day decisions."

Sinn Féin vice president Michelle O'Neill welcomed what she described as the "far-reaching" proposals put forward by the EU.

"I hope we can find solutions and find certainty that the business community here desperately are looking for.

"I will meet with Maroš Šefčovič tomorrow," she added.

"We will discuss the proposals in more detail but I think this represents progress [and] very much fulfils the commitments made within the protocol to protect the all-island economy, to ensure no hard border on this island and to make sure we protect the Good Friday Agreement."

British Prime Minister Boris Johnson signed up to the Northern Ireland Protocol as part of his Brexit agreement in 2020, but has since argued it was agreed in haste and was no longer working for the people of Northern Ireland. 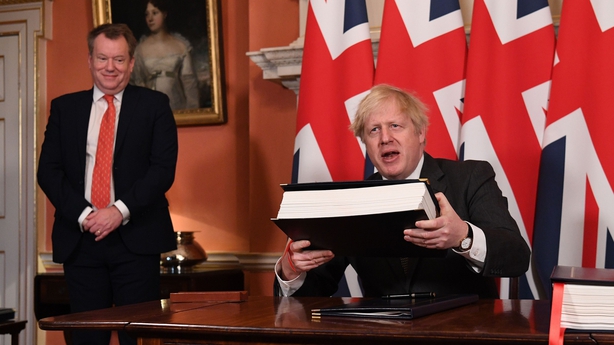 ECJ mentioned 'only once' says Sefcovic

There is no reference in today's proposals to removing the European Court of Justice - described as a "key issue" by UK Brexit Minister David Frost yesterday.

Mr Sefcovic said the role of the ECJ was mentioned to him "only once" during discussions and interactions with representatives in Northern Ireland.

Britain has demanded that the ECJ is removed from its role in the Northern Ireland Protocol as the arbitrator of trade disputes.

Mr Sefcovic said: "When I first heard about this issue it was probably in the Command Paper which was published by the UK government just before the summer break."

Mr Frost, speaking in Lisbon yesterday, said: "The problem with the protocol at the moment is that EU law, with the ECJ as the enforcer of it, is applied in Northern Ireland without any sort of democratic process.

"So that, I think, has to change if we're to find governance arrangements that people can live with."

He said the Brexit agreement "took the United Kingdom out of the European Union" and "it was a very good deal from that point of view".

Asked why, therefore, he wanted to renegotiate it now, Mr Frost said: "Because unfortunately, it's clear that the protocol as it's being implemented in Northern Ireland is not being implemented with the necessary sensitivity.

"We have to come back to these arrangements again if they don't enjoy consent across Northern Ireland, that unfortunately is the situation. So that's why it has to be redone."

Mr Frost said the British government had spent "hundreds of millions" on implementing the protocol.