The Taoiseach said he had mixed feelings about today, and felt regret that the UK was leaving the European Union, adding that it was like "an old friend going on a journey without us".

He also said that with no checks on the land border, Irish goals have been met.

Speaking alongside him, Mr Tusk said following the endorsement, "it looks like we are very close to the final stretch".

Mr Barnier said that the deal must now be ratified by the British and European parliaments "before the end of October" in order to go into effect before Britain leaves the bloc.

Mr Juncker said "What we have agreed on is much more than a deal. It's a legal text that provides certainty for the problems created by Brexit".

The Taoiseach paid tribute to his European colleagues, saying he felt enormous solidarity from them.

"As the leader of a small nation I have felt enormous solidarity from my European partners, and I think it's been demonstrated in the past few years is a union of peoples and one in which small states are protected.

"I have mixed feelings today, I regret the UK is leaving but respect the decision to do so, like an old friend going on a journey without us, and we really hope it works out for them. There will always be a place at the table for them if they ever want to come back.

"What we have is a revised agreement, a new solution, a unique solution which recognises the unique history of Northern Ireland, different from the backstop, more likely to be used to come into force and could become permanent, but only with the consent of the elected representatives Northern Ireland."

Earlier, Mr Varadkar said the Brexit deal reached this morning protects the wishes of the people of Northern Ireland and also avoids a hard border.

Speaking in Brussels minutes after Prime Minister Boris Johnson held a press conference with Jean-Claude Junker confirming a deal had been made, Mr Varadkar said that compromises had to be made to protect Ireland and the EU.

"As things stand we have a draft agreement between the EU on one hand and the British government on the other," he said. 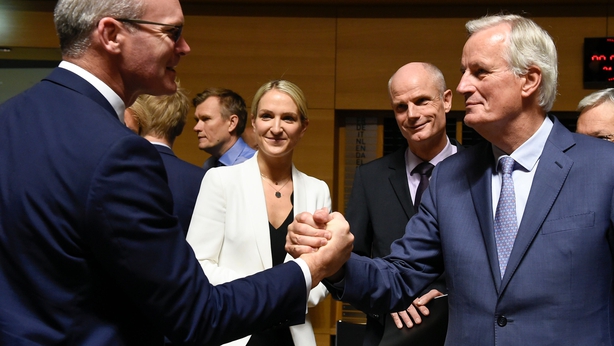 "It's a good agreement allowing the UK to leave the EU in an orderly fashion with a transition period which is very important for businesses and citizens across the EU and UK," he said.

"It also creates a unique solution for Northern Ireland recognising the unique history and geography of Northern Ireland, which ensures that there is no hard border between north and south, the all island economy can continue to develop and protects the single market and our place in it.

When asked if the DUP could scupper the deal, after the party released a statement on Thursday saying they could not support the proposals, Mr Varadkar said: "I don't want to comment on a position taken by any political party, but this will go to House of Commons on Saturday and we have to give them time and space to make the decision for themselves as to what is the right thing for the United Kingdom."

On his concessions, which includes compromises on a timescale and consent, Mr Varadkar said he was comfortable with the concessions as it fulfilled Ireland's objectives.

"I want there to be a deal, a deal that allows the UK to leave in an orderly fashion but ensure our objectives are achieved," he said.

"I always said we would work to the last moment for a deal, I think it's a good agreement for Northern Ireland, and for Ireland and the wider European Union.

"A compromise never has one father, we were all involved in making compromises, Prime Minister Johnson, the Irish Government and the European Union as well.

"We've worked really hard over the last few years to secure a deal, we regret that they're leaving but we respect that, we know they want to leave with a deal, we want a deal too, particularly one that protects our interests and we have that now.

"The backstop has been replaced with a new solution, unique to Northern Ireland recognising its unique history and geography, and which protects the all island economy and access to the single market, and crucially takes account of democratic wishes of the people in Northern Ireland, we have always expressed the view that we would never seek to keep the people of Northern Ireland in an arrangement against the will of the people."

Refusing to be drawn into speculation, Mr Varadkar gave little away on whether he felt Mr Johnson could get the vote passed in his own parliament.

"The House of Commons will meet on Saturday and the best thing we can do as Irish politicians is not intervene or interfere in UK politics, it's up to them to decide whether they want a deal, they rejected the last deal on three occasions," he said.

Fianna Fáil leader Micheál Martin has welcomed the agreement reached, although he said he believed it was "not ideal".

Mr Martin said the deal offered economic reassurance and would avoid a hard border in Ireland.

But he said he had concerns about the future impact on trade between Ireland and Britain when the UK leaves the Customs Union.

A Sinn Féin delegation has met Tánaiste and Minister for Foreign Affairs Simon Coveney in order to clarify parts of the deal.

In a statement issued afterwards, party leader Mary Lou McDonald said she is "satisfied" that there will be no hard border on the island of Ireland and no veto will be given to the DUP.

She said the "ultimate solution" to the issues posed by Brexit is Irish unity and called for "that conversation to start now". 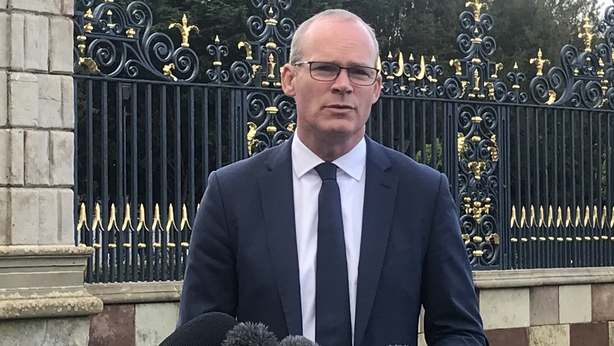 Mr Coveney has said the Brexit agreement deals with all of the issues which the Government had sought to address.

While cautioning that the deal had to be ratified by the British and European parliaments, Mr Coveney told the Dáil the agreement was a "very significant achievement ... that is worth supporting".

The outstanding issues on VAT, consent and customs were settled between EU and British negotiators in talks that concluded earlier today.

Mr Coveney confirmed that the DUP will not have a veto when it comes to the new agreement.

He said the purpose of the consent mechanism was to ensure that Northern Ireland was not being kept in any arrangement against its will.

He said it was framed in a way that it is the majority in the Northern Ireland assembly that will make that decision and he said those provisions were made very clear in the new agreement.

Speaking on RTÉ Prime Time he also said he is "concerned" about the impact of Brexit on the Government's relationship with unionism.

He said he will work hard to rebuild trust, adding that the Government "will work with all communities and parties in Northern Ireland to make this deal work".

UK and EU negotiators brought the deal over the line on the basis that the British government is happy with it.

However, it will have to be seen how it will play out as the DUP has said it will not support the proposals when they come before parliament. 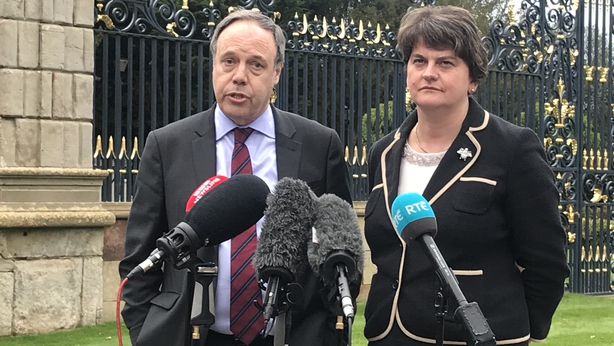 In a statement at lunchtime, the DUP said: "Following confirmation from the Prime Minister that he believes he has secured a "great new deal" with the European Union the Democratic Unionist Party will be unable to support these proposals in Parliament."

It cannot be guaranteed that the House of Commons will support the deal, but British Prime Minister Boris Johnson must have conveyed enough assurances to the EU that he could get it over the line.

EU leaders, their teams and lawyers will now look at the text to see what it involves.

European Commission President Jean-Claude Juncker has said he will recommend that leaders at an EU summit endorse the deal.

🇪🇺🤝🇬🇧 Where there is a will, there is a #deal - we have one! It's a fair and balanced agreement for the EU and the UK and it is testament to our commitment to find solutions. I recommend that #EUCO endorses this deal. pic.twitter.com/7AfKyCZ6k9

Meanwhile, Mr Johnson has described the agreement as a "great new Brexit deal".

He said that the British parliament "should get the deal done on Saturday".

We've got a great new deal that takes back control — now Parliament should get Brexit done on Saturday so we can move on to other priorities like the cost of living, the NHS, violent crime and our environment #GetBrexitDone #TakeBackControl

Minister for Finance Paschal Donohoe has described the Brexit deal as a balanced agreement that delivers the priorities Ireland has been pursuing.

Speaking to reporters in Washington, Mr Donohoe was asked if the deal represents a climb down from the Irish side.

He made reference to recent comments from the Taoiseach who said that we have to retreat away from the language of winners and losers.

"We have to realise we're involved in a negotiation that is deeply significant for the future relationship between the EU, Ireland and the UK," he said.

Mr Donohoe is in Washington for a series of meetings and held talks with the acting White House Chief of Staff Mick Mulvaney, whom he briefed on the latest Brexit developments, and told him that the agreement delivers on Ireland's priorities.

They also discussed what the deal might mean for a future trade agreement between the US and the UK.

"Given how important it is for the British government and President Trump to see new trading relationships, this offers the prospect of that to happen, while the national priorities of Ireland are being delivered," he said 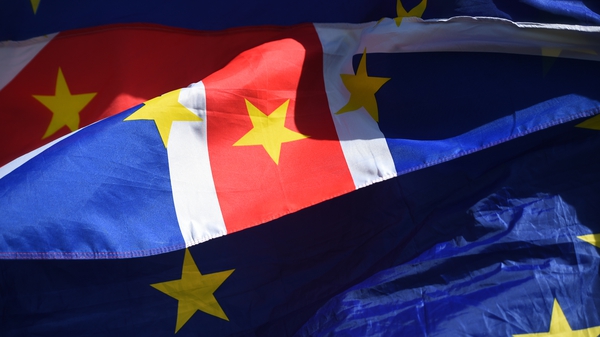