It comes after the DUP said earlier that it cannot support the Brexit deal reached between the UK and the European Union.

Speaking on RTÉ's Drivetime, Mr Wilson said he did not know how many hardline Brexiteers in Mr Johnson's Conservative Party would vote with the DUP in Saturday's vote to ratify the agreement, but added: "We will encourage others to oppose it".

"I don't think it's for me to speak for them, other than to say that I have just left the House of Commons and on my way out was stopped by at least four Conservatives who told me that they think that this is a disgraceful way to behave so we will fight this."

He said it was a "revamping" of the deal which Theresa May reached in 2017 but worse, while the manner in which consent was being dealt with was unacceptable.

"In the past Theresa May thought she had got people on board and then found to her surprise that they weren't and I suspect there is every chance that this might happen again on Saturday."

Mr Wilson said Mr Johnson has made a "political calculation" that he can get this deal through the parliament at the weekend, but said the DUP will be opposing it.

He said he believes there is a "legitimate case" against this deal due to the damage it will do to Northern Ireland and the Good Friday Agreement.

He also said the Irish Government is advocating for the GFA to be "dispensed with".

Mr Wilson also accused the Taoiseach of driving a "wedge" between Northern Ireland and the UK.

In a statement earlier, the party said that "following confirmation from the Prime Minister (Boris Johnson) that he believes he has secured a 'great new deal' with the European Union, the Democratic Unionist Party will be unable to support these proposals in Parliament".

The DUP said it has been "consistent" that it would only "consider supporting arrangements that are in Northern Ireland's long-term economic and constitutional interests and protect the integrity of the Union.

It said the proposals agreed today are not "beneficial to the economic well-being of Northern Ireland" and "undermine the integrity of the Union".

It also said the deal "drives a coach and horses" through the Good Friday Agreement over the issue of consent.

The statement is a big setback for Mr Johnson as the DUP supports his government at Westminster.

MPs are expected to hold a meaningful debate on the deal in the House of Commons on Saturday, the first weekend sitting of the British parliament in 37 years.

If parliament does not back the proposals, Mr Johnson faces a clash over whether he will request a further Brexit delay from Brussels as he is compelled to under the Benn Act. 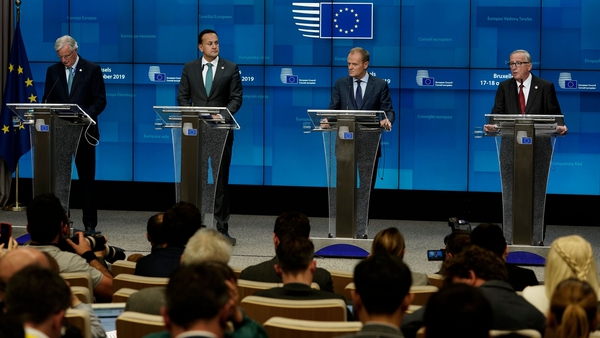