Theresa May has said that she will stand down as British Prime Minister if her twice-defeated Brexit deal is backed by MPs at Westminster.

She made the announcement in a last-ditch bid to persuade rebels in her Conservative party to back her.

Addressing a meeting of the 1922 Committee, Mrs May said she will not lead the next phase of Brexit negotiations.

Mrs May "will go if deal gets through," said the MP, who spoke on condition of anonymity. "Suggests she goes after a deal."

Another Conservative MP said that while Mrs May had not given a date, the impression was that she would go "reasonably soon".

A third Conservative MP said Mrs May had told the meeting that she would hand over to a successor to negotiate the next phase of Brexit.

Mrs May was addressing a meeting of the 1922 Committee - in effect her parliamentary caucus.

Addressing the 1922 Committee, Theresa May said:

"This has been a testing time for our country and our party. We're nearly there. We're almost ready to start a new chapter and build that brighter future.

"But before we can do that, we have to finish the job in hand. As I say, I don't tour the bars and engage in the gossip - but I do make time to speak to colleagues, and I have a great team in the Whips' Office. I also have two excellent PPSs.

"And I have heard very clearly the mood of the parliamentary party. I know there is a desire for a new approach - and new leadership - in the second phase of the Brexit negotiations - and I won't stand in the way of that.

"I know some people are worried that if you vote for the Withdrawal Agreement, I will take that as a mandate to rush on into phase two without the debate we need to have. I won't - I hear what you are saying.

"But we need to get the deal through and deliver Brexit.

"I am prepared to leave this job earlier than I intended in order to do what is right for our country and our party.

"I ask everyone in this room to back the deal so we can complete our historic duty - to deliver on the decision of the British people and leave the European Union with a smooth and orderly exit."

Her announcement is the latest dramatic turn in the UK's three-year Brexit crisis, but it still remains uncertain how, when or even if it will leave the European Union.

Many of the Conservative rebels who want a cleaner break from the EU than Mrs May's deal would deliver had made it clear that they would only consider supporting her agreement if she gave a firm commitment and date for her resignation.

Mrs May, a vicar's daughter, had already promised to step down before the next election, due in 2022.

By agreeing to go sooner, she increases the chances of her EU deal passing before the new 12 April deadline.

The British government is now expected to bring the deal back to parliament for a third vote on Friday.

However, this evening DUP leader Arlene Foster said it will not be supporting Theresa May's government if it tables a third meaningful vote on her Brexit deal.

Ms Foster said the Brexit deal would endanger the union of the UK as she made clear her party could still not support the British Prime Minister's Withdrawal Agreement.

It comes as British MPs were polled on a variety of Brexit plans this evening in a bid to break the paralysis in parliament.

A total of 16 proposals were submitted, out of which House of Commons Speaker John Bercow selected eight to be voted on with green paper ballots. 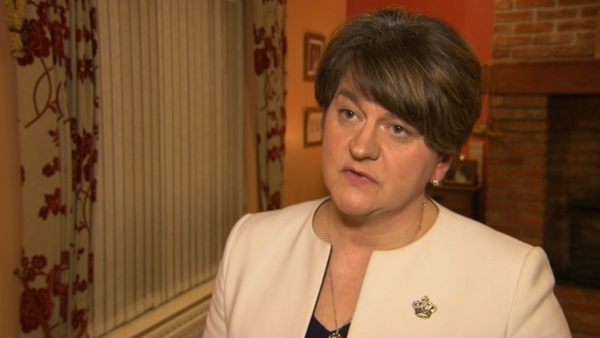 DUP will not support May if third meaningful vote tabled