British Prime Minister Theresa May has clinched legally-binding Brexit assurances with the European Union in a last ditch attempt to win over rebellious British MPs who have threatened to vote down her divorce deal again.

It comes as Mrs May was in Strasbourg for last-ditch talks with EU Commission President Jean-Claude Juncker to salvage their Brexit deal, on the eve of a crucial parliamentary vote.

Mr Juncker said that Taoiseach Leo Varadkar had signed off on strengthened guarantees offered to London to help pass the Brexit Withdrawal Agreement.

"I have spoken to the Taoiseach this evening who would be prepared to accept this solution in the interest of securing an overall deal," Mr Juncker told reporters.

Mr Juncker urged British MPs to back the Brexit withdrawal bill, warning it was this deal or no Brexit.

"The choice is clear: it is this deal, or Brexit may not happen at all. Let's bring the UK's withdrawal to an orderly end," he said.

"Let us be crystal clear about the choice, it is this deal, or Brexit might not happen at all," EU Commission chief Jean-Claude Juncker says pic.twitter.com/XfBpNdHc2x

Mrs May was greeted at the Strasbourg parliament building by Mr Juncker and the EU's chief Brexit negotiator Michel Barnier.

It follows a second phone call between Mrs May and Mr Juncker this afternoon, as well as contact by phone last night.

Mrs May urged MPs to back her "improved" deal in the meaningful vote tomorrow. She said: "I will speak in more detail about them when I open that debate.

"Now is the time to come together to back this improved Brexit deal and deliver on the instruction of the British people."

Final vlog on #Brexit deal for the night - up early for @morningireland pic.twitter.com/PyFLYkoOP7

Labour leader Jeremy Corbyn said: "The Prime Minister's negotiations have failed. This evening's agreement with the European Commission does not contain anything approaching the changes Theresa May promised Parliament, and whipped her MPs to vote for.

"Since her Brexit deal was so overwhelmingly rejected, the Prime Minister has recklessly run down the clock, failed to effectively negotiate with the EU and refused to find common ground for a deal Parliament could support.

"That's why MPs must reject this deal tomorrow."

Earlier, Mr Barnier and Secretary General of the European Commission Martin Selmayr, briefed EU ambassadors in Brussels on the state of play.

On Friday, Mr Barnier said the EU would be prepared to agree a Joint Interpretative Statement on the issue.

It was understood this would be a legally binding interpretation of the Withdrawal Agreement, but it would not alter the text of the agreement.

Mr Barnier also suggested that the UK could have a unilateral exit from the backstop, so long as Northern Ireland remained within it.

It is understood this idea was rejected by the British cabinet, although the provision for such a scenario remains in the Withdrawal Agreement.

Earlier, the Taoiseach said the UK parliament could take the threat of a no-deal Brexit off the table at any time.

"Nobody across the European Union wants to see a rolling cliff edge where tough decisions just get put off until the end of April, then to the end of May and then maybe till the end of July."

UK can take threat of no-deal #Brexit off the table at any time - @campaignforleo pic.twitter.com/kU1N5dXFoA 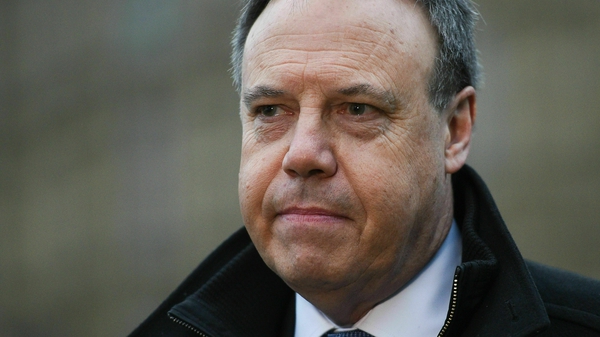