The DUP will "carefully study" the assurances British Prime Minister Theresa May has agreed with Brussels to her Brexit deal, deputy leader Nigel Dodds has said.

Mrs May clinched legally binding Brexit assurances from the bloc in a last-ditch attempt to win over rebellious British MPs who have threatened to vote down her divorce deal again.

"All of this will need to be taken together and analysed very carefully because we are speaking at the moment without having had sight of the precise text," Mr Dodds, whose party voted against the deal in January, told parliament.

Speaking in Parliament before Mr Dodds, senior minister David Lidington delivered the news that "legally binding" changes to the Brexit deal were secured.

He said: "He's outlined two documents which he is going to publish, but there are still negotiations under way, as he told the House.

Mr Dodds said that "all of this will need to be taken together and analysed very carefully, because we're speaking at the moment without having had sight of the precise text".

In response, Mr Lidington said he "completely understands" the wish for detailed analysis, adding: "I hope that those talks will conclude before the end of exchanges on my statement, and if not I would expect there to be conclusion overnight."

Mr Lidington said the sides had agreed a joint legally binding instrument on the Withdrawal Agreement and Protocol on Northern Ireland that confirms the EU cannot try to "trap" the United Kingdom in the Irish backstop indefinitely.

"The EU cannot try to trap the UK in the backstop indefinitely, and that doing so would be an explicit breach ofthe legally binding commitments that both sides have agreed," Mr Lidington said.

They have also agreed a joint statement to supplement the Political Declaration, Mr Lidington said.

Mr Lidington said: "Tonight we will be laying two new documents in the House; a joint legally-biding instrument on the Withdrawal Agreement and protocol on Northern Ireland and a joint statement to supplement the political declaration."

He added: "The first provides confirmation that the EU cannot try to trap the UK in the backstop indefinitely and that doing so would be an explicit breach of the legally-binding commitments that both sides have agreed."

And he said the "joint instrument" reflects the commitment to "replace the backstop with alternative arrangements by December 2020".

Mr Lidington went on to say: "The second document is a joint statement supplementing the Political Declaration, which outlines a number of commitments by the United Kingdom and the European Union to enhance and expedite the process of negotiating and bringing into force the future relationship - for example, it makes reference to the possibility of provisional application of such future agreement - and it sets out in detail how the specific negotiating track on alternative arrangements will operate.

"Negotiations are continuing, and the Government will provide an update to the House at the earliest opportunity should there be further changes."

He concluded by saying: "The House was clear on the need for legally-binding changes to the backstop. Today we have secured these changes.

"Now is the time to come together, to back this improved Brexit deal and deliver on the instruction of the British people."

Mrs May has promised MPs a vote on her deal tomorrow.

If she loses that vote, she has said MPs will get a vote on Wednesday on whether to leave without a deal and, if they reject that, then a vote on whether to ask for a limited delay to Brexit.

Many British MPs object to the backstop on the grounds that it could leave Britain subject to EU rules indefinitely or cleave Northern Ireland away from the rest of the United Kingdom.

Brexit-supporting MPs said they would look at what Mrs May achieves but that she would have to show a clear way for the backstop to end.

"Deal fever abounds tonight, but the crucial point is: will this backstop come to an end?" Conservative MP Steve Baker said ahead of Mr Lidington's statement to parliament. 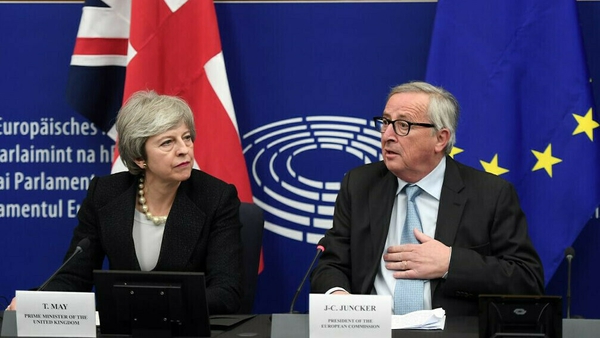