British Prime Minister Theresa May has said that the Brexit negotiations were at a "critical moment" ahead of an EU summit.

"The negotiations are now at a critical moment," she told UK parliament, adding that British sovereignty on Gibraltar - a contentious issue ahead of the summit - would be "protected".

Earlier, she described the draft Brexit Withdrawal Agreement between the EU and the UK as "the right deal for the UK".

Speaking outside No 10 Downing Street, she said: "This is the right deal for the UK. It delivers on the vote of the referendum.

"The British people want this to be settled. They want a good deal that sets us on course for a brighter future. That deal is within our grasp and I am determined to deliver it."

British PM @theresa_may says "This is the right deal for the UK." | https://t.co/O9fmzG0lkp pic.twitter.com/2ROEIUOHPa

However, MPs have warned Mrs May that they will vote down her deal in the crucial House of Commons debate which is expected early next month.

Former foreign secretary Boris Johnson urged her to "junk" her backstop plan for keeping the Irish border open, which he said "makes a nonsense of Brexit".

Labour leader Jeremy Corbyn said that Mrs May had returned from Brussels with "waffle".

"It represents the worst of all worlds, no say over the rules that will continue to apply and no certainty to the future," he said.

This morning, European Council President Donald Tusk said that Britain and European Union political leaders have agreed in principle to a text setting out their future relationship that can be endorsed by EU leaders at a summit.

Referring to a text discussed yesterday by Mrs May and European Commission President Jean-Claude Juncker, the EU summit chair said in a statement: "The Commission president has informed me that it has been agreed at negotiators' level and agreed in principle at political level, subject to the endorsement of the leaders."

The text was shared with the 27 other governments of the European Union this morning.

The declaration sets out an "ambitious, broad, deep and flexible partnership," officials said.

"The declaration establishes the parameters of an ambitious, broad, deep and flexible partnership across trade and economic cooperation" and other areas, according to a copy of the document seen by AFP.

I have just sent to EU27 a draft Political Declaration on the Future Relationship between EU and UK. The Commission President has informed me that it has been agreed at negotiators’ level and agreed in principle at political level, subject to the endorsement of the Leaders.

According to the draft declaration, the "parties envisage having a trading relationship on goods that is as close as possible, with a view to facilitating the ease of legitimate trade." 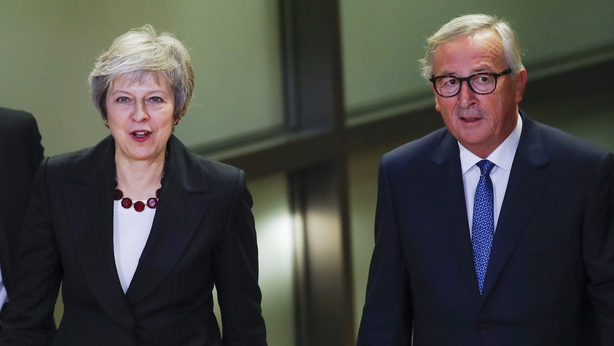 Both the EU and Britain "should aim to deliver a level of liberalisation in trade in services well beyond the parties WTO commitments," according to the draft declaration.

On the issue of the border with Northern Ireland, the declaration reads: "The Parties recall their determination to replace the backstop solution on Northern Ireland by a subsequent agreement that establishes alternative arrangements for ensuring the absence of a hard border on the island of Ireland on a permanent footing."

"Facilitative arrangements and technologies will also be considered in developing any alternative arrangements for ensuring the absence of a hard border on the island of Ireland on a permanent footing," it adds.

The transition period, which Britain and the EU hope will begin once Britain leaves the EU on 29 March, can be extended "for up to one or two years," according to the draft declaration.

It comes as Mrs May is battling to keep her Brexit deal alive as she readies to return to Brussels for last minute negotiations on Saturday.

Last night, Mrs May returned from talks with Mr Juncker in Brussels without having finalised the deal.

Mrs May said: "We have made further progress. And, as a result we have given sufficient direction to our negotiators, I hope, for them to be able to resolve the remaining issues.

"And that work will start immediately.

"I now plan to return for further meetings, including with President Juncker on Saturday to discuss how we can bring to a conclusion this process and bring it to a conclusion in the interests of all our people."

The move came after reports from Brussels that the Sunday summit could be scrapped.

As anger continues in Westminster over the draft Brexit Withdrawal Treaty agreed last week, Mrs May's partners in government, the DUP, say they are not withdrawing from the confidence and supply deal agreed with the Tory party.

DUP MPs did not support Mrs May’s government in a number of Commons votes this week.

But party leader Arlene Foster said last night that Mrs May should reflect on the fact that she does not currently have enough support to get her deal through a Commons vote.

As the countdown to the scheduled summit intensified, British Chancellor Philip Hammond said that if the Brexit deal is rejected by the UK parliament it would unleash "political chaos" and could lead to EU withdrawal not happening.

Speaking on ITV, he said: "It's clear that if the deal is not approved by parliament we will have a politically chaotic situation.

"And, we don't know what the outcome of that will be.

"And for those who are passionately committed to ensuring that we leave the EU on the 29th of March, 2019, one of the things that they are going to have to bear in mind is the possibility that, in that chaos that would ensue, there may be no Brexit."

"When we look at the economy, and the operation of the economy, getting a smooth exit from the European Union, doing this in an orderly fashion, is worth tens of billions of pounds to our economy."

Mrs May faced a strong push back from Spain over the status of Gibraltar in the "divorce deal".

Mrs May spoke with her Spanish counterpart Pedro Sanchez yesterday evening to try and deal with the situation.

A Downing Street spokesman said: "She said there had been good engagement between the UK, the government of Spain and the government of Gibraltar in order to come to an agreement in the withdrawal agreement and associated package of memoranda of understanding relating to Gibraltar.

"The Prime Minister reiterated her commitment to agreeing a deal that works for the whole UK family including Gibraltar, the other UK overseas territories and the crown dependencies."

Mr Sanchez has said he will "veto" Brexit unless there are changes to the draft agreement.

He said: "After my conversation with Theresa May, our positions remain far away.

"My Government will always defend the interests of Spain. If there are no changes, we will veto Brexit."