The Dáil has agreed a motion welcoming the draft agreement on the UK's departure from the European Union.

There was no formal vote on the main motion.

As fewer than 10 members of the house stood up against the motion, Ceann Comhairle Seán Ó Fearghaíl declared it carried.

During the debate, the Taoiseach expressed hope and expectation that EU leaders would be in a position this weekend to sign off on the draft deal and the joint political declaration.

Leo Varadkar, who will attend a special European Council meeting in Brussels on Sunday, described the agreement as a finely balanced compromise between the concerns and priorities of all 28 countries involved.

He said his sincere wish was that it would receive the necessary approval of Westminster and the European Parliament.

"It represents a good outcome for Ireland and for the EU as a whole, and for the UK itself," Mr Varadkar said.

He added that finalising and approving the deal is the best way to ensure an orderly withdrawal.

Mr Varadkar also said the Democratic Unionist Party puts the integrity of the "precious union" ahead of everything else, even if it leads to a "lesser world" and said the DUP did not want the "best of both worlds" when it came to a Brexit deal.

The Taoiseach added that the draft agreement should not be seen by unionists as a threat to the union.

The Minister for Foreign Affairs called for support from the Houses of the Oireachtas for the draft agreement.

Simon Coveney said it would send a strong signal ahead of the European Council meeting on Sunday that Ireland is fully behind it. 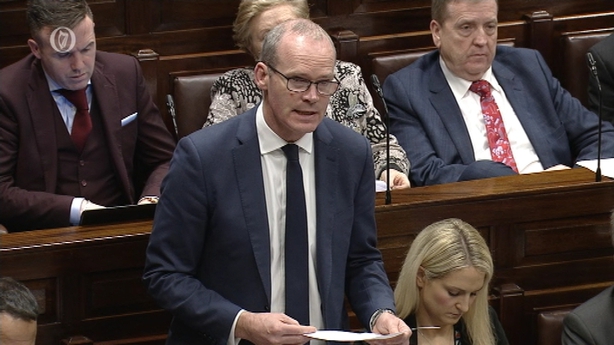 Mr Coveney said that Ireland needed to be "crystal clear" that the withdrawal agreement text is fully supported by all parties in the house.

"In my view it takes away from the clarity of what we are trying to achieve this evening in terms of a clear simple statement from Ireland that the text agreed last week we fully support and we're encouraging others to do the same."

The Fianna Fáil leader said the continued absence of the Northern Assembly and Executive had profoundly damaged Northern Ireland interests.

Micheál Martin said the institutions were silenced "at a time when they are needed the most".

He accused Sinn Féin of denying Northern Ireland a voice on the issue.

He said the intention could not have been to soothe unionist fears when Sinn Féin announced that Brexit should be a cause for a unification referendum.

The Sinn Féin leader said her party is one of four remain parties in Northern Ireland that represents the majority view of citizens there.

Mary Lou McDonald criticised the Democratic Unionist Party for getting it "catastrophically wrong" on Brexit, during the referendum debate and in its aftermath.

"They are really wrong now about the draft agreement on the table," she said.

Deputy McDonald described as "disappointing and disturbing" that the DUP took the side of Conservative Party Brexiteers and the UK Independence Party over the needs and aspirations of citizens of the North and across the Island.

She said it was their decision to be "reckless and irresponsible".

Deputy McDonald said there was considerable merit in looking at the post-Brexit environment through a new lens.

She said it was her belief that, in time, there will be a collective conclusion the real lasting guarantee desired is the unity of the country.

She said that many in unionism were assessing old allegiances and whilst they will always be British, a significant number of people that would have staunchly opposed the notion of unity, have been challenged to ponder the future.

"We are on the road to a unity referendum, it's no longer if, but when", she said.

Ms McDonald said that Sinn Féin has made it clear that in the event of a no deal Brexit, it will be incumbent on the British government to put the constitutional future of the North to the people by way of a unity referendum.

She called on the Irish Government to take the same position.

Deputy McDonald said her party sought to amend the Government's motion on Brexit before the Dáil tonight to ensure that citizens' rights are protected and will prevail in the future. 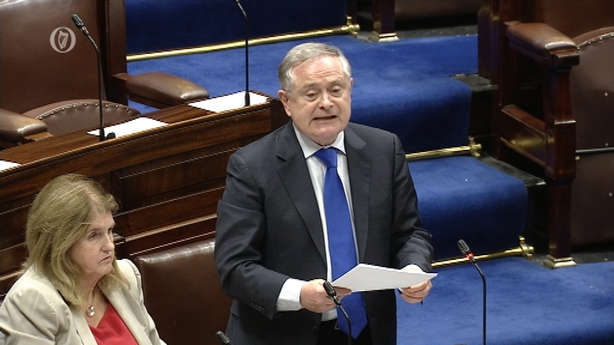 Labour leader Brendan Howlin said the movement of live animals between Britain and Northern Ireland has never been raised as a constitutional issue before now.

He added that if, and only if, the backstop is needed, this will be extended to other food products.

However, he said the backstop gives Northern Ireland's people and businesses free access to the entire EU market.

Mr Howlin described it as potentially 'a tremendous win-win scenario', but he added it will require political leadership in the North to explain this potential.

He stated that there is nothing undemocratic about a second referendum on Brexit in light of the fact there is now a deal on the table and there is more information about the EU and issues such as the customs union.

He added that enough has changed since June 2016 that it would be reasonable and sensible to ask the British people if they are sure that this is what they really want.

Deputy Richard Boyd Barrett of Solidarity-People Before Profit commended the Government and its officials for what it has achieved in the Withdrawal Agreement, in relation to the North/South border.

However, Deputy Boyd Barrett said the same guarantees about the fate of workers did not exist and has not been discussed enough in relation to Brexit.

Deputy Boyd Barrett's group has submitted two amendments to the Government's EU-UK withdrawal motion seeking commitments that Brexit will not be used as a pretext to attack workers' pay and conditions or to impose cuts to public services; and secondly calls for a North-South border poll on partition to protect against any possibility of a hard border.

However, Solidarity TD Mick Barry said he disagreed with People Before Profit's amendment to tonight's Dáil motion on Brexit, seeking a border poll.

Solidarity, formally known as the Anti-Austerity Alliance and People Before Profit formed an electoral alliance during the last general election, to give weight to their speaking rights in the Dáil.

However, each entity retains its separate organisation and identity.

Mick Barry described the withdrawal agreement as a Tory Brexit deal which he said was "anti" the interests of working class people.

WATCH: Solidarity & People Before Profit group is divided re an amendment by PBP to Government motion on #Brexit in Dáil tonight. PBP is seeking a border poll, but @MickBarryTD says Solidarity disagrees with it pic.twitter.com/pW7B8cOnOq

Deputy Mattie McGrath of the Rural Independent Group said the "political bullets" flying around Westminster are getting perilously close to causing damage to Ireland.

He said the agreement aims to protect North-South co-operation adding that the Good Friday Agreement has to be sacrosanct.

However, Deputy McGrath said the economic impact is uncertain across a wide range of areas considering it is unclear whether "Mrs May can get this over the line".

He said the DUP are unionists that value the Union of the UK and will not be coerced or bullied into abandoning those principles regardless of the impact.

"We should know that by now," he said, but added that it was "reckless".

Covid-19: Charities warn those in poverty will struggle