British Prime Minister Theresa May has secured cabinet support for her draft Brexit deal, after a five-hour meeting with ministers at No 10 Downing Street.

Mrs May said she believed the draft agreement was "the best t hat could be negotiated".

The prime minister said she will make a statement to the House of Commons tomorrow, saying: "I firmly believe, with my head and my heart that this is a decision which is in the best interests of the United Kingdom."

She said there had been a "long, detailed and impassioned debate" on the Brexit deal.

"The choices before us were difficult, particularly in relation to the Northern Ireland backstop, but the collective decision of Cabinet was that the Government should agree the draft withdrawal agreement and the outline political declaration," said Mrs May.

"This is a decisive step which enables us to move on and finalise the deal in the days ahead.

"These decisions were not taken lightly but I believe it is a decision that is firmly in the national interest," she added.

As she made her statement, Mrs May had to compete to be heard over the boos and shouts of anti-Brexit campaigners who were stood on Whitehall, near Downing Street.

She said: "When you strip away the detail the choice before us is clear - this deal which delivers on the vote of the referendum, which brings back control of our money, laws and borders, ends free movement, protects jobs, security and our Union, or leave with no deal or no Brexit at all.

"I know there will be difficult days ahead. This is a decision that will come under intense scrutiny and that is entirely as it should be and entirely understandable," she said. 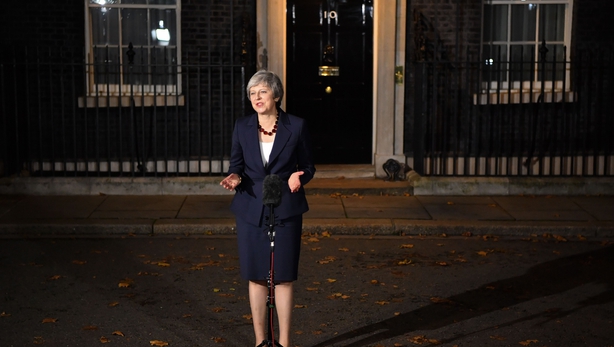 "The choice was this deal that enables us to take back control and to build a brighter future for our country or going back to square one with more division, more uncertainty and a failure to deliver on the referendum.

"It is my job as Prime Minister to explain the decisions that the Government has taken and I stand ready to do that beginning tomorrow with a statement in Parliament."

Earlier, Mrs May told the House of Commons that the draft agreement struck by British and European Union negotiators delivers on the result of the 2016 referendum to leave the EU.

She also said that her government would never hold a second vote on the issue.

DUP leader Arlene Foster met Mrs May for an hour this evening to discuss the text of the deal.

Mrs Foster, whose party props up Mrs May's government at Westminster, described the meet as "frank", saying "she is fully aware of our position and concerns".

We had a frank meeting tonight with the Prime Minister lasting almost an hour. She is fully aware of our position and concerns.

Earlier, Ms Foster had warned Mrs May that there would be "consequences" if her deal treated Northern Ireland differently from the rest of the UK.

Mrs Foster accused the Irish Government of having been aggressive throughout the Brexit process, saying it has not sought to find a solution.

She said that if people had addressed Brexit in a pragmatic way, there were solutions to the issue of the border on the island of Ireland.

"Unfortunately that was not the attitude that came from the Irish Government or the EU."

DUP Brexit spokesman Sammy Wilson said the deal would be appalling to many people who will judge it when it comes to a vote in parliament.

He said: "I think that people will be appalled at this deal. To use (Mrs May's) own words, no deal is better than a bad deal, and I would think that the House of Commons will give their judgment on it when it eventually comes to them."