The mathematical experts tracking Covid-19 in Ireland are convinced that thousands of lives have been saved and an enormous amount of illness has been avoided during the eight weeks of lockdown.

But for many 18 May, when some of those restrictions will be eased, cannot come fast enough. There are five tests to be considered before the Government will proceed to ease the social restrictions next Monday.

The first relates to the progress of the disease.

Fortunately on this all the signs are good as can be clearly seen in this graph showing the number of new Confirmed cases of Covid-19 per day. 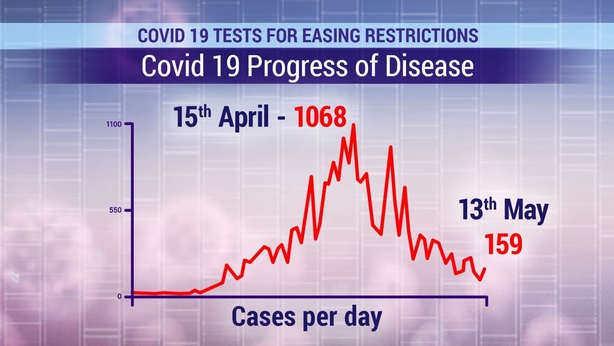 We hit a daily peak of 1,068 confirmed cases per day in the middle of April. But we were down to just 159 on Wednesday this week and that general downward trend looks solid.

Confidence in this downward trend in new cases is underpinned by progress on the so-called reproduction rate of the virus, or R number. That is a measure of the average number of people an infected person in Ireland will go on to infect. 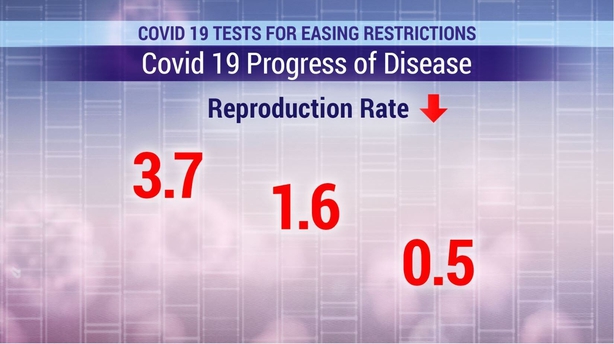 It fell from 3.7 in early March, to 1.6 by the middle of the month, and then again to 0.5 at the end of March. Most importantly, however, the reproduction rate has remained stable at 0.5 in Ireland ever since.

If everything else were to stay the same, the virus would be heading for extinction. Ireland's Covid-19 reproduction rate of 0.5 is lower than it is in any of our neighbouring countries. In Northern Ireland, it is estimated to be 0.8. In England it is just under 1.

The second test to be satisfied relates to the capacity and resilience of our hospitals.

There is good news on this front too.

For one thing the number of new patients being admitted to hospital with the virus was running at 100 people per day one month ago. Today admissions are running at just 15 per day. 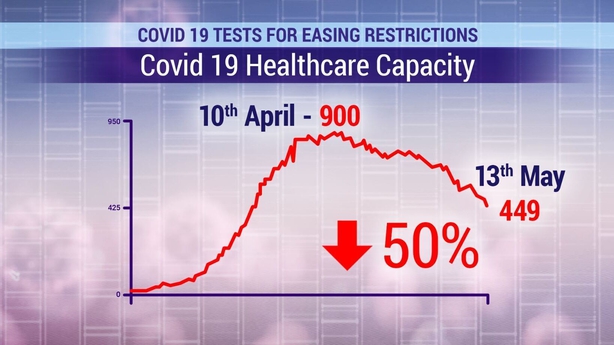 Following on from that, the number of Covid-19 patients in general hospital beds is down from a peak of about 900 in mid-April to 449 yesterday. That is a 50% reduction in a month.

Also to top it all off, we now have 1,202 vacant beds in our hospitals. 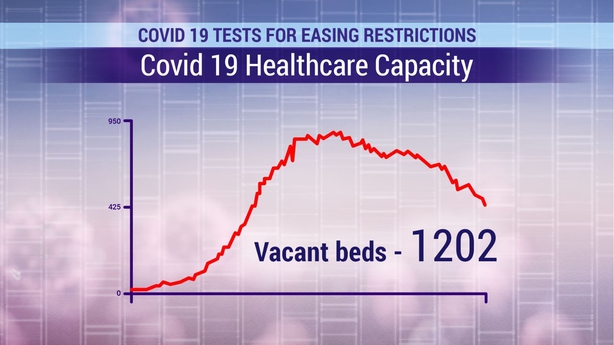 The cutting edge when it comes to pressure on our hospital capacity is what is happening in Intensive Care Units. The European Centre for Disease Control pointed out that Ireland had the lowest number of intensive care beds per capita before the pandemic began.

The low level ICU bed was a huge worry and added urgency to the need to enforce the lockdown before Covid-19 overwhelmed our hospital system. Huge money has since been invested by the HSE in expanding ICU capacity, which has gone from 225 beds before the pandemic to 418 fully staffed beds today. 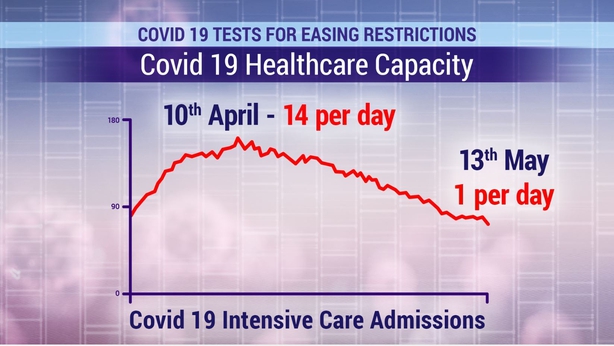 Even more important than that for the decision makers this weekend is the trend in ICU admissions.

The latest figures show the rate of new admissions to hospital critical care units has fallen from 14 per day one month ago to between 1 and 2 today. That has helped drive the number of patients with Covid-19 occupying ICU beds down from a peak of 160 last month to just 61 today - a drop of 62%. 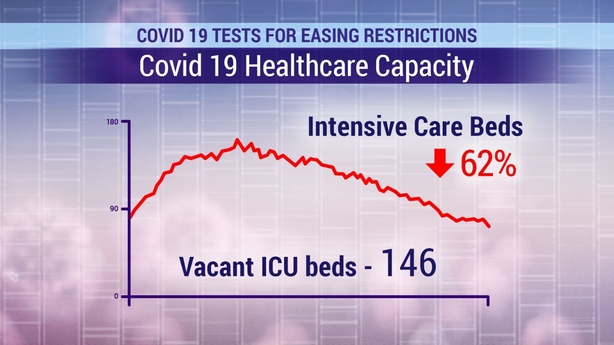 In fact when all non-coronavirus patients in ICU are added in, we still have 146 vacant beds in ICU. It is a sign of resilience within the hospital system that was not evident two months ago.

The third test to be satisfied relates to testing people for virus and contract tracing.

The HSE gave new details of their new system today.

By Monday they said total swabbing and laboratory capacity will be up to on 15,000 tests per day.

They pointed out however, that the positivity rate in Covid-19 testing is now down to just 3%. This means they are expecting 97% of people to test negative for the virus.

Their new system which comes into operation from 18 May will see all those people getting a text message immediately after the laboratory analysis to inform them of their negative results. This according to the HSE will happen within two days of a swab test being taken. 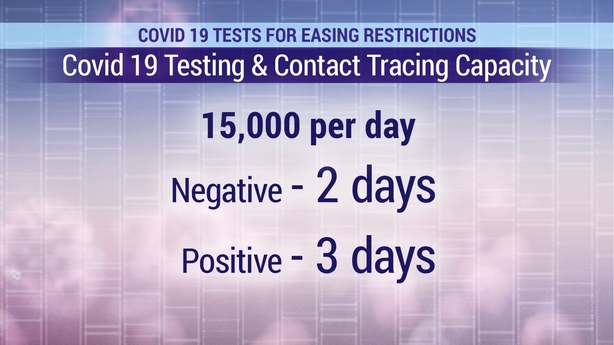 The remaining 3% of cases – that is all those people likely to test positive for the virus - fall into two categories when it come to contact tracing.

About 90% of them will be straight forward with good details of close contacts. The HSE expects to be able to complete contact tracing for all of people those the day after a SWAB tests positive. This task is made far easier by the fact that the average number of close contacts per case has fallen on foot of the lockdown. It has come down from about 21 at the start of March to 2 or 3 close contacts today.

That enabled the HSE to promise a three-day turnaround for testing and contact tracing the vast majority of people testing positive for the virus.

The HSE described how the final 10% of people who test positive can be more difficult for contact tracing due to their circumstances. For instance they could be patients in intensive care, very elderly people, or somebody with language difficulties. They gave no commitment about how long it might take to complete testing and contact tracing for such cases.

The fourth test before easing the restriction on Monday is the ability to shield and care for at risk groups.

The recent Census of Mortality in care homes showed deaths in long term residential care settings during the four weeks ending on 19 April was double the number during the same period last year. 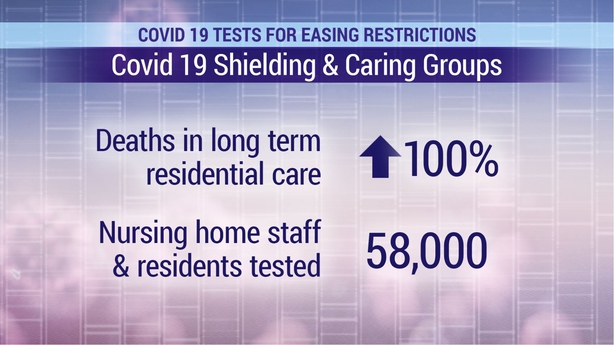 However all 58,000 staff and residents of nursing homes have now been tested for Covid-19 and the number of new cases is falling sharply.

The final issue to be considered before Monday is the risk of secondary morbidity due to Covid-19.

Because people had been reluctant to attend hospital and also because certain hospital services were curtailed due to the pandemic, the worry was that more people could die from non-coronavirus illnesses. 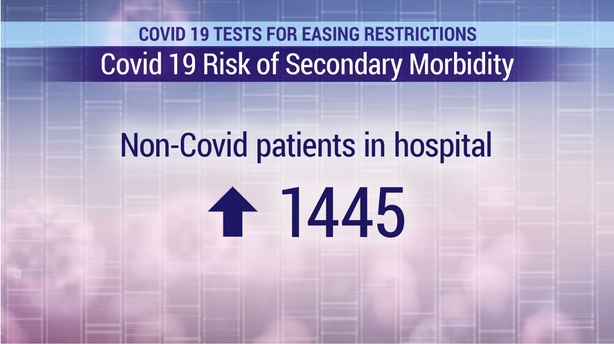 In fact the number of vacant beds has fallen by 989 during that period. The gap, which is 1,445 hospital beds, is assumed to be made up of new non-coronavirus patients who were not coming forward from treatment last month, but are now in for treatment.

No doubt this will alleviate some of the fear about secondary morbidity due to the pandemic.