A Ukrainian member of parliament has described calls by Sabina Higgins for a negotiated settlement of the war in Ukraine as "under-informed" and "painful".

Kira Rudik told RTÉ News that she had an emotional reaction to the comments by the President's wife saying "it's easy to call for peace when you are not actually inside war".

In a letter to the editor of the Irish Times, which was published on Wednesday and signed by Sabina Coyne Higgins from Dublin 8, Ms Higgins criticised an Irish Times editorial published on 20 July saying she was "disappointed" and "dismayed" that it did not "encourage any ceasefire negotiations that might lead to a peace settlement".

Ms Higgins said until the world persuades Russia and Ukraine to agree to a ceasefire and negotiations, "the long haul of terrible war will go on".

It is reported that the letter was published on the President's official website yesterday but was later removed.

RTÉ News has asked Áras an Uachtaráin why the letter was published and removed, and for their response to reaction to its content, however the Áras has not yet responded to the request.

"When somebody calls for peace, I can tell you there is too much blood, too much pain and no security guarantees. So we are not aiming for peace, we are aiming for the victory," said Ms Rudik.

Ms Rudik also said she hopes in future that people would be careful making such statements.

Meanwhile, the Ukrainian Ambassador to Ireland said she does not believe the letter is the official position of the President of Ireland.

Larysa Gerasko (pictured below) said she saw the letter on the President's website and is aware that it has now "disappeared" but she said that, as far as she understands, that means it is not the President's official position. 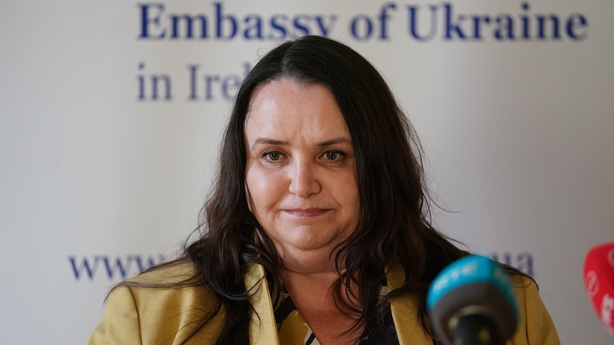 Asked if she felt Sabina Higgins' comments were appropriate, she said Ms Higgins was an Irish citizen and has the right to express her view but she said she thought it was better that the Irish people and the Irish Government and politicians "express their view on this point".

A leading member of the Ukrainian community in Ireland said the reported publication of the letter on the website of the President of Ireland "sends very strange signals".

Michael Baskin, who runs the Ukrainian Crisis Centre and has represented the Ukrainian community in Ireland for a number of years, said while he accepts Sabina Higgins' perspective and her right to an opinion on the conflict, he said the publication of her views on the official website of the President of Ireland suggested the office was accepting that view.

He said, "She is an intellectual and she is clearly coming from a humanitarian basis but sometimes I think on such a sensitive topic I'd like to see a deeper understanding of the actual facts.

She, like any citizen, may have opinions and publish it. But if the President's office put it on the website that means they are accepting the views. It sends very strange signals. An opinion in the paper is one thing but putting it on the website is completely changing the game."

A Government spokesperson has not yet responded to a request for comment on the issue.