He said he will continue as prime minister until a successor has been appointed and has started appointing new ministers to his cabinet, including a third education secretary in three days.

Mr Johnson told his Cabinet that the Government will not seek to implement new policies or make major changes of direction until his successor is chosen.

"In politics, no one is remotely indispensable," he acknowledged in a statement delivered from a lectern in Downing Street.

"I want you to know how sad I am to be giving up the best job in the world, but them's the breaks," he said.

Mr Johnson said it is "clearly now the will" of the parliamentary Conservative Party that there should be a new leader.

Announcing his resignation, he said: "It is clearly now the will of the parliamentary Conservative Party that there should be a new leader of that party and therefore a new prime minister.

"And I've agreed with Sir Graham Brady, the chairman of our backbench MPs, that the process of choosing that new leader should begin now and the timetable will be announced next week.

"And I've today appointed a Cabinet to serve, as I will, until a new leader is in place."

Boris Johnson has announced his resignation. Speaking outside Downing Street, he said it was clearly the will of the Conservative Party that there should be a new leader | https://t.co/XX3OJ9NbwJ pic.twitter.com/J5HdTypoEH

Tory backbencher Tom Tugendhat has become the first contender to throw his hat into the ring to become that new leader.

The chairman of the Commons Foreign Affairs Committee, who has never served in government, said he would offer the party a "fresh start".

Writing in The Daily Telegraph, he said: "I am putting together a broad coalition of colleagues that will bring new energy and ideas to government and, finally, to bridge the Brexit divide that has dominated our recent history.

"I have served before - in the military, and now in Parliament. Now I hope to answer the call once again as prime minister. It's time for a clean start. It's time for renewal," he wrote.

Meanwhile, former health secretary Matt Hancock has said he will not be running in the Conservative leadership election and that he still believed Mr Johnson was the right man to lead Britain.

Mr Johnson was forced to step down after his ministers and Conservative MPs quit or withdrew their support over the scandal surrounding former deputy chief whip Chris Pincher, who quit after allegedly assaulting two men while drunk at private members' club.

Mr Johnson said his arguments to stay in power were rejected due to a "herd instinct" at Westminster and said it was "painful" not to be able to deliver on his plans.

He said: "In the last few days, I tried to persuade my colleagues that it would be eccentric to change governments when we're delivering so much and when we have such a vast mandate and when we're actually only a handful of points behind in the polls, even in midterm after quite a few months of pretty relentless sledging and when the economic scene is so difficult domestically and internationally.

"I regret not to have been successful in those arguments and of course it's painful not to be able to see through so many ideas and projects myself.

"But as we've seen, at Westminster the herd instinct is powerful, when the herd moves, it moves.

"And my friends in politics, no one is remotely indispensable and our brilliant and Darwinian system will produce another leader, equally committed to taking this country forward through tough times."

Mr Johnson thanked his wife, family and the civil service in his speech.

"I want to thank Carrie and our children, and all the members of our family who have had to put up with so much for so long," he said.

He also thanked the "peerless British civil service" and the "fantastic NHS" who "helped to extend my own period in office".

Boris Johnson says that he is sad to be giving up "the best job in the world ... but them's the breaks" | Follow live blog: https://t.co/XX3OJ9NbwJ pic.twitter.com/pO7ZeS8tMH

Mr Johnson said it had been an "immense privilege" to serve as prime minister and thanked the British public as he concluded his speech.

He said: "Above all, I want to thank you, the British public, for the immense privilege that you have given me and I want you to know that from now on until the new prime minister is in place, your interests will be served and the Government of the country will carry on.

"Being prime minister is an education in itself. I have travelled to every part of the United Kingdom and in addition to the beauty of our natural world I have found so many people possessed of such boundless British originality and so willing to tackle old problems in news ways that I know that even if things seem dark now, our future together is golden.

"Thank you all very much. Thank you."

Until his successor is chosen by the Conservative Party, Mr Johnson has said that the Government will focus on the agenda on which it was elected.

In a statement No 10 said: "The Prime Minister opened Cabinet by welcoming those returning or joining for the first time.

"He said his priority would now be to continue delivering on manifesto pledges and making sure the Government is on the side of the public, on the cost of energy, transport and housing and all else that matters to them.

"He made clear the Government would not seek to implement new policies or make major changes of direction, rather it would focus on delivering the agenda on which the Government was elected.

"He said major fiscal decisions should be left for the next Prime Minister."

She tweeted: "The PM has made the right decision.

"The government under Boris's leadership had many achievements - delivering Brexit, vaccines and backing Ukraine.

"We need calmness and unity now and to keep governing while a new leader is found."

Earlier, Mr Johnson appointed Greg Clark as 'levelling up' secretary and James Cleverly to the post of education minister.

Reflecting the turmoil playing out at the heart of British power, Mr Johnson had moved Nadhim Zahawi from education secretary to run the finance ministry on Tuesday night.

By yesterday, Mr Zahawi had told Mr Johnson to quit and by this morning he went public with that call.

The prime minister also appointed Michelle Donelan as minister for education, to replace Mr Zahawi, but she had quit by this morning, saying Mr Johnson needed to go.

Northern Ireland Secretary Brandon Lewis resigned this morning, telling Mr Johnson that the government requires "honesty, integrity and mutual respect" and it is "now past the point of no return".

His departure was soon followed by a string of other ministers.

In his letter to Mr Johnson, Mr Lewis said: "I have given you, and those around you, the benefit of the doubt. I have gone out and defended this government both publicly and privately. We are, however, now past the point of no return."

Mr Lewis was replaced in the post by Shailesh Vara, who previously served as Minister of State for Northern Ireland in 2018. 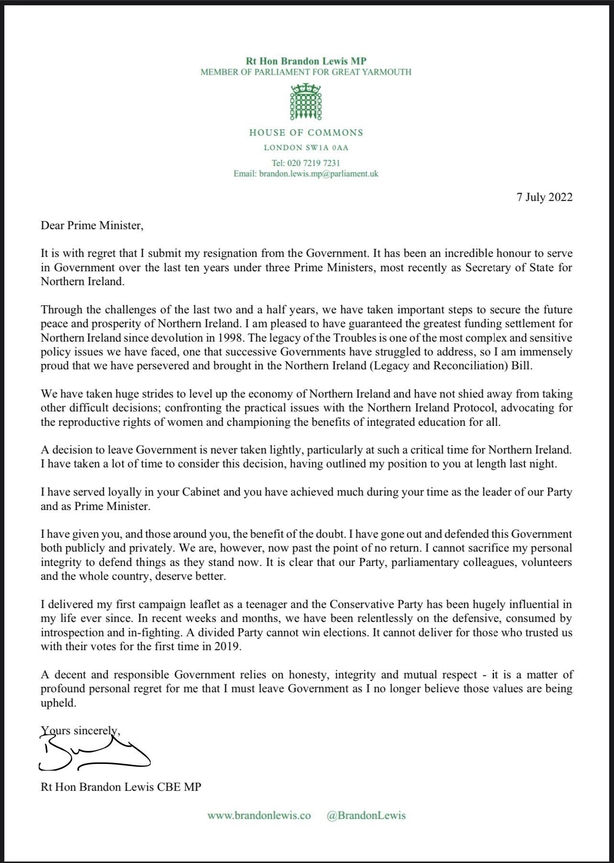