Sinn Féin vice president Michelle O'Neill has laid a wreath at the cenotaph in Belfast in memory of soldiers of the British Army who died at the Battle of the Somme.

It was done in a low-key event, hours ahead of the city's official commemoration.

Ms O'Neill has previously participated in World War I commemorative events in Dublin, but this is the first time a Sinn Féin leader has done so in Belfast.

She said she wanted to demonstrate that she could be a first minister for all when the Stormont institutions are re-established.

The two republican politicians stood in silence in front of the Cenotaph after laying the wreath for those who died. 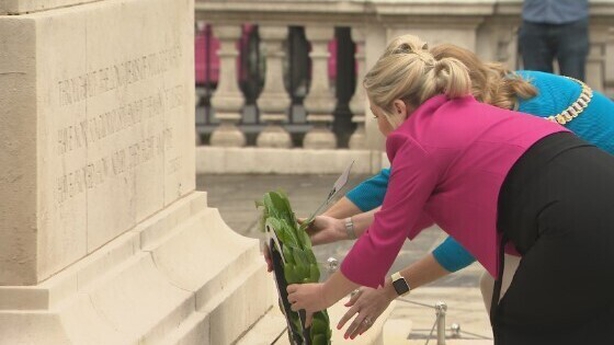 "I think as political leaders we have a responsibility to reach beyond our comfort zones and reach out the hand of friendship and to do whatever we can in terms of leadership and healing the wounds of the past," Ms O'Neill said.

She was asked whether the gesture might have carried more weight had she attended the city's official commemoration and laid her wreath then.

She said people should not get distracted from the significance of the event she had participated in. 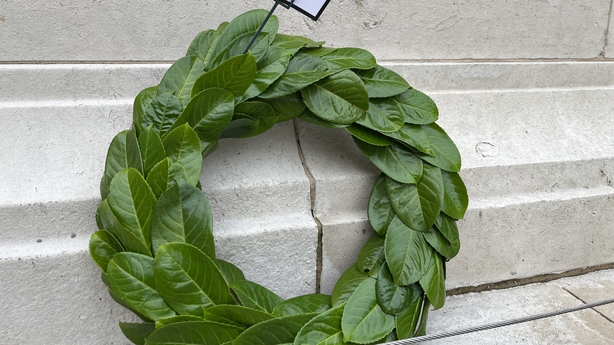 1 July is the anniversary of the start of Battle of the Somme in 1916.

Almost 2,000 soldiers from the 36th Ulster Division, mostly recruited from the north of Ireland, died on the first day.

A large number of soldiers from the 16th Irish Division died later in the battle.

Over the years in Belfast, Sinn Féin mayors have laid wreaths at the cenotaph on the morning of the annual commemoration.

The time for segregated commemoration has passed, a DUP MP has said.

Gavin Robinson said while he welcomed her attendance this morning, he called for "collectivity" in commemoration.

He said: "I think it's good that she did attend today. I think we should recognise that Sinn Féin breached that barrier 20 years ago, with Alex Maskey first attending the Cenotaph here and recognising the sacrifice at the Somme.

"I think it would be nice to get to the point where we could share in this commemoration today - that individuals, political leaders didn't need to segregate themselves from the commemoration that took place."

He said the sacrifice of those who died at the Somme was shared between communities, and so the commemoration should be shared too.

He said: "I don't want to be churlish about it. I think it is good that she was here today. But I think the time has passed, that we need to segregate ourselves in commemoration.

"Everyone who sacrificed at the Somme did so collectively, irrespective of the community background they had. The different regiments, the different divisions, they were in France together and they died together.

"And they did that for all of us. That's what we commemorate here today. And it'd be nice to see some collectivity in that commemoration."