President Michael D Higgins has led tributes to the civilians who died on Bloody Sunday as he commemorated the 50th anniversary of the killings.

Mr Higgins said the victims continue to be honoured through commitment to the rights that "were won at such great cost".

Thirteen civilians were shot dead when British soldiers of the Parachute Regiment opened fire on people who had been attending a civil rights rally on 30 January 1972.

A 14th person, John Johnston, who had been amongst the injured, died several months later.

His name is included on the official monument. A further 15 people were injured.

In a virtual address today, President Higgins paid tribute to the victims of Bloody Sunday and all those who lost their lives throughout the Troubles.

"The events of that day 50 years ago reverberated across this island and around the world."

He also paid tribute to the people of Derry and their long campaign for justice.

Mr Higgins said: "The 30th of January 1972 will live on in our collective memory, as will your efforts of vindication of the truth.

"We honour the morality of that memory today. We honour the men who died. And we continue to honour them into the future by our continued commitment to the rights that were won at such great cost.

"We do so best by protecting these rights won, and sustaining the principled and inclusive peace that we have built together.

"Let us all celebrate that, in transcending all the darkness and the wrongs, the exclusions, today Derry stands as a beacon of hope and justice, of battling and succeeding against the odds, a peace and a people with an inclusive achievement of dignified and respectful ethical remembering."

Mr Higgins made the comments during one of the events to mark the 50th anniversary of the atrocity.

The names of all the victims was read out by actor Adrian Dunbar at the Beyond the Silence event h eld at the Millennium Forum in Derry.

A choir sang Danny Boy while images of the 1972 march and subsequent justice campaigns, as well as the Saville inquiry ruling, were displayed in the background.

Families of those killed on Bloody Sunday held pictures of their loved ones at the front of the stage.
Mr Dunbar said the "emotion is palpable" across the city.

The Line Of Duty actor added: "Bloody Sunday was one of the darkest days since the foundation of Northern Ireland.

"A hammer blow from a callous and cruel government, designed to squeeze the sense of freedom out of the people of Derry and choke the struggle for civil rights for all, regardless of political view or persuasion.

"Thirteen innocent men and boys from this great city lay dead on cold ground on the Bogside."

He concluded by reading Seamus Heaney's poem Road To Derry.

Singer-songwriter and Derry man Phil Coulter also performed at the event and sang an emotional rendition of The Town I Loved So Well.

16 lights above Derry's Guildhall tonight. 14 for the dead, 1 for the injured and 1 for all those who died in the Troubles ⁦@rtenews⁩ pic.twitter.com/V2Lb63Y6Au

Taoiseach Micheál Martin has said there must be no amnesties for Troubles killings and the law must apply equally to everyone.

He was speaking after privately meeting families of those killed on Bloody Sunday.

A large crowd gathered for today's commemoration. The Taoiseach laid a wreath on behalf of the Government.

A public inquiry finally exonerated the dead and injured in 2010, and the then British prime minister David Cameron publicly apologised, calling the killings "unjustified and unjustifiable".

Mr Martin said there should be full accountability in all legacy issues. "I don't believe this will be any amnesty for anybody," he added.

"I believe the full process and justice of the courts should be deployed. All of the parties in Northern Ireland are very clear that they do not want amnesties, they want due process to apply.

"It is important because time is moving on too for many, many families and families need closure.

"Families need to know more in terms of who killed their loved ones and they need access to information, and that is why it's important that agreements are not just entered into, but that are followed through."

Mr Martin also said it would have been "helpful" if some of the unionist parties were represented at the commemoration event.

"I think it's important that we all recognise others and people who are not from one's own community, and that would have been helpful."

Tánaiste Leo Varadkar said: "We pledge to honour the memory of those who died on Bloody Sunday by standing with all victims of the Troubles and continuing to work for permanent peace on our shared island."

This afternoon, Minister for Foreign Affairs and Defence Simon Coveney said that he believes that "there should be a route to justice" for the victims of Bloody Sunday and their families.

Speaking to RTÉ's This Week from Derry, Mr Coveney said the Government and the British government "are talking at the moment about how to deal with the legacy of the past, because the British government have made a proposal to introduce what's called a statute of limitation, which in effect is seen by everybody as an amnesty for all Troubles-related murders and crimes and atrocities before 1998".

Mr Coveney continued: "We have said that we absolutely cannot and will not support that approach and so the two governments continue to talk on that issue, but certainly families here today were very, very clear with me that they wanted and needed my support, in terms of ensuring that we don't see the British government legislating to introduce what is effectively an amnesty for Troubles-related murders and killings, and certainly we support them, absolutely."

He said that the families have "shown remarkable dignity and courage over the past 50 years" and "really are an inspiration to an awful lot of people". 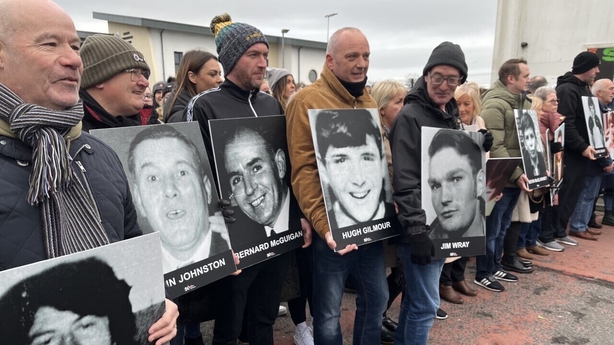 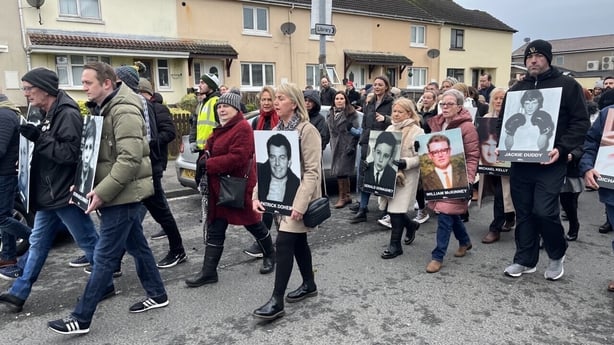 Earlier, relatives of those killed and injured on Bloody Sunday took part in a remembrance walk and retraced the steps of the original march.

The crowd gathered at Creggan Shops before making their way to the Bloody Sunday Monument in Rossville Street, where the annual memorial service and wreath-laying ceremony took place.

Ms McDonald said: "Solidarity today and always with the Bloody Sunday families. Their dignity is an inspiration."

The names of those who were killed and injured were read out during the 45-minute memorial service. 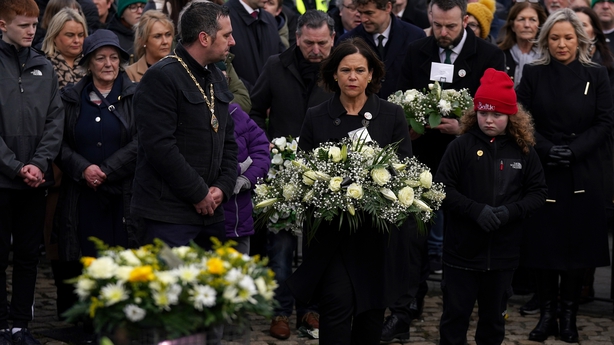 Michael McKinney, brother of William, criticised the British government for its controversial plans to ban prosecutions for Troubles killings.

Addressing the crowd, Mr McKinney said: "The British government intend to announce an end to all legacy investigations.

"They intend to announce it because they're scared.

"Scared that their soldiers, spooks and civil servants will be exposed, and that their role as a combatant and catalyst in the war in Ireland will be highlighted around the world.

"They are trying to deny us justice because they are scared to face justice.

"But we want to send a very clear warning to the British government. If they pursue their proposals, the Bloody Sunday families will be ready to meet them head on. We will not go away and we will not be silenced.

"We will expose them for what they are - an embarrassment to any democracy founded on the rule of law."

Catholic Primate of All Ireland, Archbishop Eamon Martin, marked the commemoration at a special mass in Saint Eugene's Cathedral, Derry.

He said: "Very painfully the Bloody Sunday families were denied for too long the truth about what happened to their loved ones. And sadly they are not alone. A legacy of heartbreak, and with it, a dark shadow of secrecy, still hangs over much of our troubled past.

"As a society we have to find ways to open ourselves to the hidden truths about our past so that proper healing can happen."

In the US, Republic Congressman Bill Keating commented: "As I reflect today on the 50th anniversary of the Bloody Sunday massacre, I want victims' families to know that my support for them is unwavering.

"That’s why I introduced a bipartisan resolution to commemorate that fateful day and to continue support for the Good Friday Agreement." 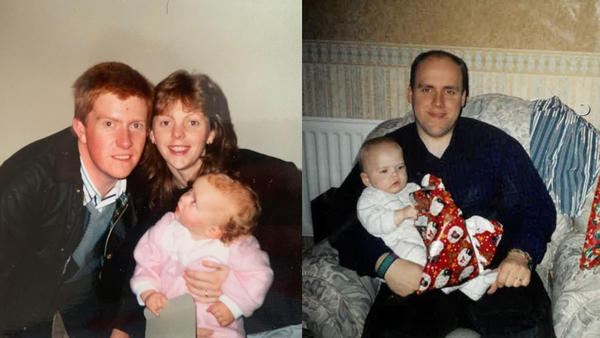 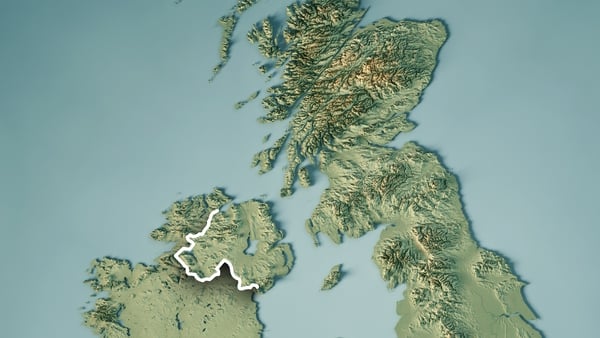 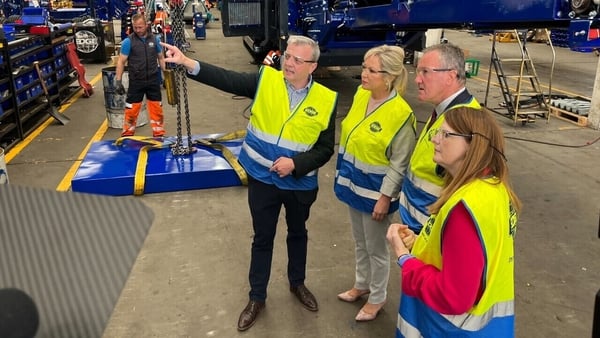 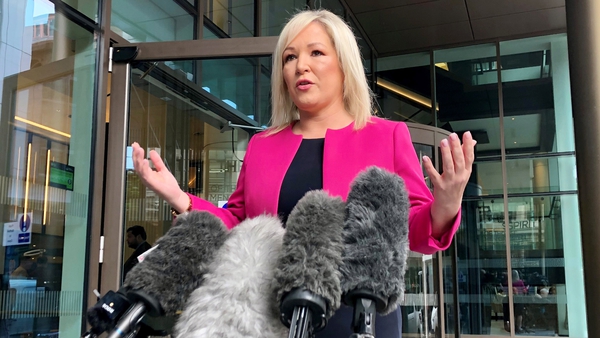