Pride is being marked across the country this month but many events are taking place virtually for the second year in a row due to the pandemic.

Organisers say this year's event is particularly important because of the major impact Covid-19 had on members of the LGBTQ plus community.

LGBT+ football team the Dublin Devils took on Shelbourne in a sun-soaked Tolka Park this afternoon.

It is one of the few in-person events being held as part of this year's Pride festivities.

Pride is being marked across the country this month but many events are taking place virtually for the second year in a row due to the pandemic | https://t.co/mFvLCgHP6q pic.twitter.com/cYbYRwGLNF

Jed Dowling, Festival Director of Dublin LGBTQ Pride, said the emphasis this year is on having small events and gatherings that people can engage with.

Over the past 18 months, members of the LGBT community have been hugely affected by Covid-19 because many did not have the same family networks. 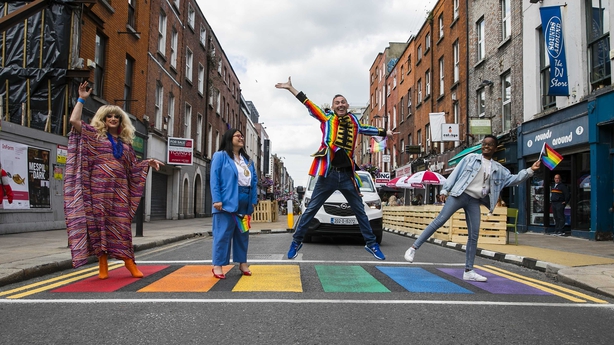 "Issues of isolation and loneliness and mental health problems were compounded. So we've been working to find ways that people can safely interact and people can start safely return to some form or normalcy," he said.

"For a second year in a row most of Pride will take place online but there will be some evidence of the annual event on the streets," he added.

As part of Dublin Pride, Dublin City Council has painted a rainbow crossing on Capel Street.

If it is deemed a success the council said it will paint more in other locations across the capital.

Eadaoin Breathnach, of Pride of Deise in Waterford city, said they have been overwhelmed by the response to the incident.

"The silver lining of it all is that we can't actually keep up with the demand for flags. Every business, every person that we meet is like 'Can you sort us out with a flag?', so that's really important for us," she said.

"But it's also really important for the young people in Waterford or anyone that might be struggling with their identity to see that the response to something negative had been so enormously positive," she added.

The deadline for video submissions for the Dublin Pride virtual event is Sunday.

RTÉ is the official media partner to the event and will be hosting a number of Pride related programmes on radio, online and on the RTÉ Player.