Minister for Health Stephen Donnelly has announced that Israel, as well as Albania and St Lucia, will no longer be designated states under the system of mandatory hotel quarantine.

People who have arrived from those countries in recent days can leave their hotels and quarantine at home.

In a statement last night, Mr Donnelly said that because of the "substantially improved" epidemiological situation in these countries, arrangements had been made "on an exceptional basis" for the small number of people who had arrived from these states in recent days and had not been in any other designated state in the 14 days before they arrived, to leave mandatory hotel quarantine as soon as they wished.

Such travellers must quarantine at home for 14 days or until they get a negative PCR test five days or more after arriving in Ireland.

Last week, the minister announced he intended to remove the three states from the list of designated states but he said people who had arrived from those countries would have to complete their quarantine periods.

Last night, he said the latest decision was made on the advice of the Acting Chief Medical Officer who was supported by the Expert Advisory Group on Travel.

He said the mandatory hotel quarantine system was a key element in the protection of public health. 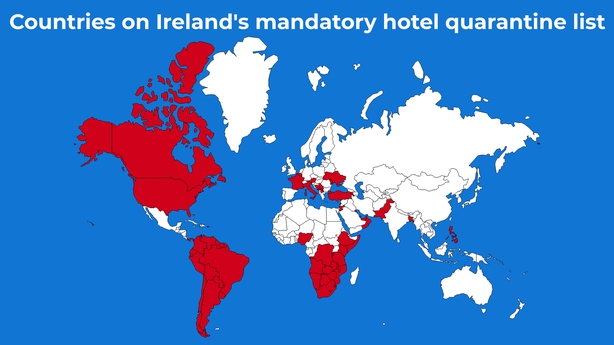 The Expert Advisory Group on Travel was set up last month to develop a method to risk assess states and consider the concerns Covid-19 poses for travel.

The factors it takes into account when recommending amendments to the list of designated states are countries with an outbreak involving known variants of concern and countries with a very high 14-day incidence rate.

Before the change was announced, two people who had arrived from Israel and who had challenged the legality of their detention in separate high court actions, were released from their quarantine yesterday afternoon.

Both had been fully vaccinated for Covid-19 and had negative PCR tests.

Minister for Health @DonnellyStephen has said the Government is very concerned in the high level of Covid-19 variants in countries that were added to the mandatory hotel quarantine list on Friday | @morningireland | Read more: https://t.co/QiXQwefyMZ pic.twitter.com/2tvg2VcV18

Speaking on RTÉ's Morning Ireland, Mr Donnelly said that mandatory quarantine is a serious thing to undertake and there must be a reasonable bar to say that these countries represent a real risk to public health in Ireland.

He added that the recent court cases show the complexities of running such a system.

"The Irish Government is looking at every single jurisdiction right around the world to determine on any given day whether or not they represent a risk in terms of variants of concern or high incidence rates of Covid," he said.

The minster said capacity is another one of the challenges of hotel quarantine and more capacity will be introduced to the system.

He said currently there are around 650 beds available and this is being ramped up to 1,100, and this could be increased if necessary.

However, he said, it is the case that it may not be possible to have a room allocated on every day a person wants to travel and it may be necessary to introduce a cap on travellers into the country in the future.

It is 'inevitable' that people will rush to travel to Ireland from countries that were added to the mandatory hotel quarantine list before it comes into effect, Minister for Health @DonnellyStephen has said | @morningireland | Read more: https://t.co/QiXQwefyMZ pic.twitter.com/HT5xPx3vd9