There will have to be clarity next week on how Leaving Certificate students will be graded this year, the Taoiseach has said.

Micheál Martin said he was surprised at the "unilateral" decision by the ASTI to withdraw from talks yesterday, and he acknowledged that students were going through stress because of this.

He said all parties involved had to do what they could to alleviate that stress.

"That means clarity fairly soon in relation to that," Mr Martin said.

He said it was important to resolve the issue "over the next number of days", adding that all parties involved understood what needed to be done.

"So, yes - next week we will have to bring clarity to this," Mr Martin said.

Minister for Education Norma Foley has invited the Association of Secondary Teachers to "re-engage" in talks aimed at reaching a decision on this year's Leaving Cert exams.

Ms Foley met with the President and General Secretary of the ASTI this afternoon following their withdrawal from talks.

The ASTI pulled out of the talks in protest at what it said was the prioritisation of a calculated grade type assessment over the sitting of exams.

In a statement this evening, Minister Foley said it was her "strong belief that the process of confidential engagement with all stakeholders agreed last Friday remains the best forum to advance discussions".

The Department of Education said that "discussions continued with all the other partners today and will continue throughout the weekend".

Minister Foley said she was committed to "providing clarity and certainty to students at the earliest possible time".

Sinn Féin's education spokesperson Donnchadh Ó Laoghaire has called on the ASTI to return to talks.

Speaking on RTÉ's Drivetime, Mr Ó Laoghaire said every effort should be made by stakeholders to reach a decision.

The Minister of State for Skills and Further Education, Niall Collins, has said "constructive" talks took place this afternoon between the Minister of Education and the teachers unions, the ASTI and TUI.

Speaking on the same programme he also urged the ASTI to rejoin the talks.

Sinn Féin leader @MaryLouMcDonald says a decision on this year's Leaving Cert is needed now and that students should be given a "choice" @rtenews pic.twitter.com/LoL50Jx7Ur

Meanwhile, Sinn Féin leader Mary Lou McDonald has called for clarity around the format of this year's Leaving Certificate, adding that while teachers "do have some legitimate concerns", students need "certainty and choice".

Deputy McDonald expressed a preference that this year's Leaving Certificate students would be given the option of sitting an exam, but that an "alternative method of assessment" needs to also be agreed.

"People need to get their act together" she said, adding that a year on from the start of the pandemic, it is unfortunate that no decision has been made.

Mary Lou McDonald said that talks must reach a conclusion soon, and there is "no excuse" for there to be such uncertainty only a few months prior to the state exams.

"I feel desperately sorry for students that have been left in this position, and really badly let down," she said.

The Welfare Officer for the Irish Second Level Students' Union, Matthew Ryan, who is a Leaving Cert student at St Francis College in Rochestown in Cork, has said the announcement of the ASTI withdrawing from talks is very disappointing and that it had left students once again "in limbo".

Speaking on RTÉ's Six One News he said that while there are valid arguments for the ASTI position, resolutions to the problems will not be solved by walking away from the talks.

Mr Ryan said reports from the CAO suggest there will be upwards of 80,000 applications for third level this year and students are concerned about points inflation and that there are going to be enough college places.

He said it must be remembered that there is a person behind every one of these numbers and that their well-being must come first in these discussions.

Mr Ryan said he is very hopeful that there will be an answer next Tuesday and that clarity would be needed then. 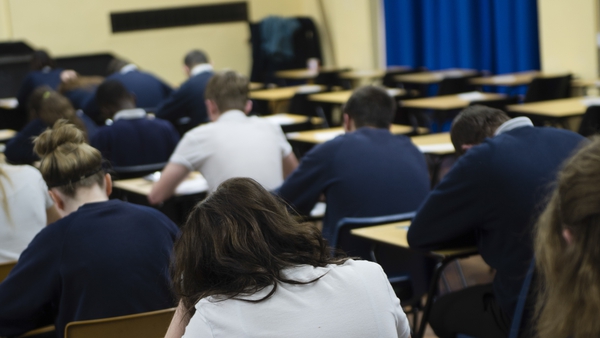 'Beyond unhelpful' to walk away from exam talks - Harris