Taoiseach Micheál Martin has said the Government has decided to extend the Level 5 restrictions until 5 March with a view to crushing the numbers of those contracting the disease and in turn the numbers needing hospitalisation and intensive care.

People travelling into the country without a negative Covid-19 test along with arrivals from Brazil and South Africa will face a mandatory quarantine period in a hotel of up to 14 days.

Speaking at a press conference this afternoon, the Taoiseach said the message for the next six weeks is very simple: stay at home, do not travel, do not make any journeys outside your 5km unless you absolutely have to.

Taoiseach Micheál Martin has said he does not think a Zero Covid strategy is 'possible or sustainable'.

He said that once you reopen again the prospect is there for reseeding the virus | Follow live updates: https://t.co/QnLXAnXNb9 pic.twitter.com/mqY3ZwCmL5

He said the hospitals are under enormous pressure and that health workers must be protected. He said we cannot give the virus or its variants any space.

The date of 5 March will bring Ireland in-step with similar restrictions in Northern Ireland.

Tánaiste Leo Varadkar said that all people arriving in the State are now legally required to quarantine for the first time.

Mr Varadkar said some of this quarantining will be done in hotels, some in people's homes. But he conceded that parts of the new system would take several weeks to become operational.

Legislation will be needed to underpin the move to hold Irish and EU citizens without a negative Covid test in hotels.

It has also been confirmed that those returning from overseas to the State via Northern Ireland will be subject to the same legal requirements.

Fines for those outside the 5km travel limit who are intending to travel abroad will be increased from the current €100. The increase has not been decided on yet but sources indicated it could rise to €500.

Mandatory quarantine will be required for passengers who arrive into Ireland without a negative PCR test, as well as for persons arriving from Brazil or South Africa.

Other passengers will be required by law to quarantine at home | Follow live updates: https://t.co/QnLXAnXNb9 pic.twitter.com/EUEDemEANQ

He said a very important point he wanted to make on travel is that the evidence so far shows that the majority of people travelling and coming back into the country are Irish citizens.

"Quite a number went on holiday during the Christmas period and are coming back," he said.

Additional gardaí are being deployed to ports and airports and Mr Martin said those found going outside their 5km limit will be subject to increased fines.

"The road we are on is hard. The length of time we have had to live with restrictions makes it even harder but it is the road we must take together," Mr Martin said.

Mr Varadkar said "maybe it will be the case that international travel is not possible this summer and not possible this Christmas", but he said he certainly does not want to close off that possibility today "but maybe we'll have to".

Mr Martin said the idea of a zero-Covid strategy has not been dismissed.

He said NPHET has never advised the Government to go for a zero-Covid strategy, but their position is we suppress the virus to the lowest possible level.

He said it would have to be a very long-term policy and there is a question of its sustainability.

'If you can seal your country off entirely when do you ever unseal?' Tánaiste Leo Varadkar asks, in response to a question about the introduction of a Zero Covid strategy | Follow live updates: https://t.co/QnLXAnXNb9 pic.twitter.com/x4N4nrCVDQ

A number of opposition parties have claimed that the latest Covid-19 restrictions do not go far enough and only a 14-day mandatory quarantine regime for all incoming passengers will be effective.

Mr Varadkar said the reasons for extending restrictions until next month are "four fold".

He said it is firstly to reduce case numbers by 5 March; secondly to allow hospitals and ICUs and those who work in them time to recover from the current surge in capacity; thirdly to allow for the phased opening of schools across February and March; and finally to get the vaccine out to more people in the first quarter of this year.

It is intended that people will be charged for their time in hotel quarantine, Tánaiste Leo Varadkar has said | Follow live updates: https://t.co/QnLXAnXNb9 pic.twitter.com/0ZKGm5V5Ly

Green Party leader Eamon Ryan said international travel plans should be done in collaboration with colleagues in Northern Ireland, the UK government, the European Union and beyond.

Mr Ryan said today's decision means that the current travel regulations applicable to those who travel to Ireland from overseas also apply to those who route their journeys via Northern Ireland.

He said they are going to amend the passenger locator regulations to require all incoming passengers including those going on to Northern Ireland to provide a place of residence and address on the form.

He said the Government also has to work with the UK government and they will wait and see what decisions they make today on their own travel arrangements, but it is important that they both collaborate, "to make sure there isn't a back door one way or the other between one jurisdiction and the other".

Minister for Health Stephen Donnelly said about two thirds of all new Covid cases are likely to be the UK variant.

He said the fall in the number of Covid cases is in spite of the UK variant, which is a far more contagious variant than we have dealt with so far.

While daily case numbers are falling it is going to take some time for the number of people in hospitals and intensive care units with Covid-19 to reduce, Minister for Health Stephen Donnelly has said | Follow live updates: https://t.co/QnLXAnXNb9 pic.twitter.com/gGt46io00K

Mr Donnelly said the vaccination programme is going well and they exceeded their target of 140,000 last Sunday.

He said they will continue to focus on cohorts 1 and 2 and this week's target is to administer about 51,000 doses and they will be moving onto cohort 3, which is the over 70s in the coming weeks.

However, Mr Donnelly said AstraZenica has announced they intend to deliver significantly less vaccine doses than what was agreed with Ireland and the other EU member states.

He said the numbers have not been finalised between AstraZeneca and the EU and they are working very closely with their EU partners with the aim of maximising the volume of delivery, as close to the agreed schedule as possible and with the aim of it being delivered as close as possible after its authorisation.

Mr Martin said vaccinations will be key to determining what happens from April onwards in terms of reopening the country.

"When we get there, we'll be cautious and conservative" because even if case numbers come down, any lapse in between, with variants etc could start putting the hospitals under pressure again, said Mr Martin.

He said they are hoping the Johnson and Johnson vaccine will come on stream in March, which he said "will shape the reopening of society and the decisions we take then".

Mr Varadkar said it is reasonable to project that in 10 days' time, the country could be down to around 500 or 600 cases of Covid a day and in 20 days’ time - half that figure again.

"That is optimistic but it is our current trajectory," said Mr Varadkar. 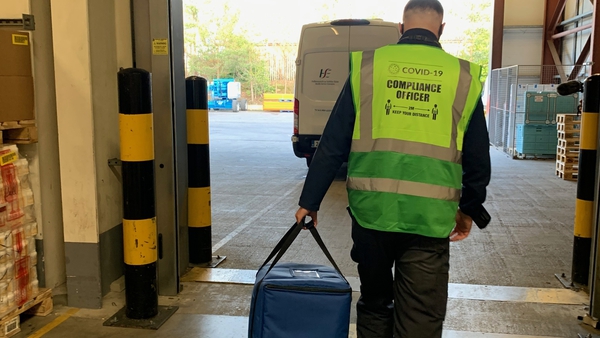 From importation to inoculation: Following the Pfizer-BioNTech vaccine