There have been ten further coronavirus-related deaths and 6,521 new cases of the disease notified to the Department of Health.

The backlog of cases due to a delay in reporting positive laboratory results has now been cleared.

A total of 2,307 people have died with coronavirus in Ireland with the cumulative total number of infections having reached 127,657.

The number of patients with Covid-19 in ICU has reached 96, this is an increase of eight since yesterday. There are 1,043 patients in hospital with the disease, with 99 additional hospitalisations in the past 24 hours.

Professor Philip Nolan said Ireland was facing the "fastest rate of growth" of coronavirus since March with "exceptionally high levels of disease".

He warned that the R (reproduction) rate number was now between 2.4 and 3. At no time since the start of the pandemic in March has it been above 1.4 or 1.6.

"That is certainly, at least in part, explained by very high levels of socialisation and social contact" in the last weeks of December, he said.

"At no point in this pandemic, other than at the very beginning, were we seeing reproduction numbers above 1.4, 1.6. This week we have to report the reproduction number as being somewhere between 2.4 and 3.0" Prof Philip Nolan says | #Covid19 blog: https://t.co/Mq9A7anTYp pic.twitter.com/g6yVXhT9c6

They are "beginning to be concerned" that the new variant that originated in England is "playing a role" in the high levels of transmission we are now seeing.

However, Prof Nolan said there are "some very early signs" that the restrictions imposed recently by the Government are starting to have an impact.

If anything, this is a sign that we have "a considerable way to go and we need to continue and redouble our efforts" to suppress transmission of the virus, Prof Nolan said.

"We are beginning to be concerned that certainly over the last two weeks, the new variant, the B117 variant ... is playing a role in the high transmissibility and the high reproduction number that we're seeing of the disease right now," Prof Philip Nolan says | #Covid19 pic.twitter.com/3HnBoFgalI

The number of close contacts has decreased from 4.8 on average per person down to three.

There are signs that the number of cases is starting to plateau at about 6,000 per day, he said

A pessimistic outlook would have between 2,500 and 5,000 cases per day by the end of January, according to Professor Nolan, while an optimistic forecast would see cases reducing to between 1,100 and 2,900 per day at the end of the month. 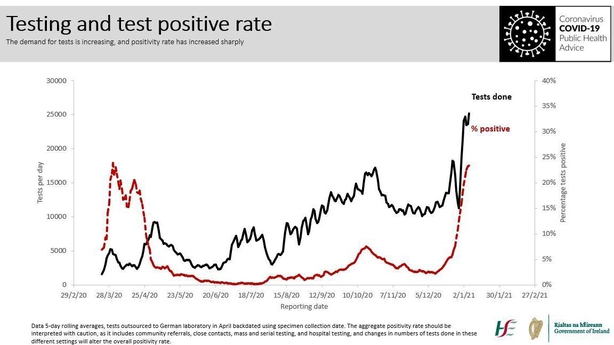 Chief Medical Officer Dr Tony Holohan said alcohol has "played a significant role" in the spread of the disease. He would welcome any reduction in the opportunity for people to socially gather and consume alcohol.

"This disease loves alcohol," he told the press conference.

Asked about plans for Leaving Cert students to attend school three days a week, @CMOIreland reiterates that schools are safe places. He says the level of activity involved in that amount of education is totally different to the level involved in supporting full education #Covid19 pic.twitter.com/bRUgBG4pDr

Prof Nolan said the lowest incidence of any age group is in children aged 12 and under. He said in all of October there were just over 4,100 Covid-19 cases in young people aged 4-18.

There could be anywhere between 1,200 and 2,500 people in hospital with Covid-19 by the end of January, he told journalists.

Prof Philip Nolan says the lowest incidence of any age group is in children aged 12 and under. He says in all of October there were just over 4,100 cases in those aged 4-18, and about 400 of those occured in the context of school outbreaks | Live blog: https://t.co/Mq9A7anTYp pic.twitter.com/b7weNrkxxA

That could translate to between 200 and 250 people in ICU. "This all depends on how infection rates develop between now and then," said Prof Nolan.

However, a week ago the rate of acceleration in infections looked even worse than it does today, he said.

Dr Holohan said we need to "drive down" the level of activity across society and referred to today's figures was "the worst set of data, by some distance," that NPHET have had to consider.

The recent surge in Covid-19 cases has not been because of people coming into the country from abroad, but our own behaviour, according to the CMO.

He said: "The spread of infection here is, for the most part due our own behaviour, our own interactions and the extent to which we have or have not followed public health guidelines."

The contribution to case numbers from incoming travel in recent weeks has been "very small ... we represent the risk to each other, not people from outside the country".

Dr Holohan said the advice remained for all people not to embark on non-essential travel.

He said the new requirement for passengers arriving from Britain and South Africa to have a negative PCR test for Covid-19 will also help slow down passenger numbers. 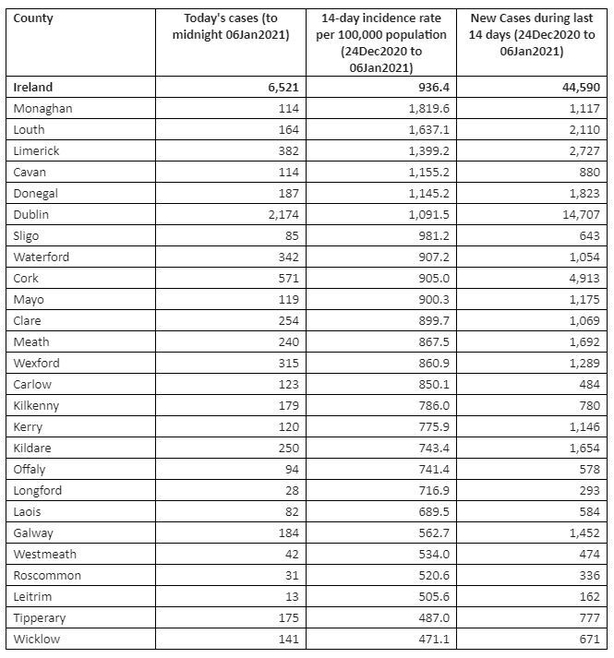 There could be anywhere between 1,200 and 2,500 people in hospital with Covid-19 by the end of January, according to Professor Philip Nolan.

This depends on how infection rates develop between now and then. That could translate to between 200 and 250 people in ICU.

However, a week ago the rate of acceleration in infections looked even worse than it does today, he said.

Dr Holohan said that we need to "work collectively" in accordance with the special measures introduced by the Government, to "slow it down" while the vaccine programme is rolled out.

Deputy Chief Medical Officer Dr Ronan Glynn said there have been 41 Covid-related deaths already in the month of January. This follows on from 163 such deaths in December.

Earlier, Health Services Executive chief Paul Reid revealed that 15,314 vaccines have been administered to date from the 81,900 delivered into the country and inoculations have been delivered across the seven hospital groups at 35 locations.

Vaccinations are being carried out at 25 long-term care locations this week and will continue over the weekend. 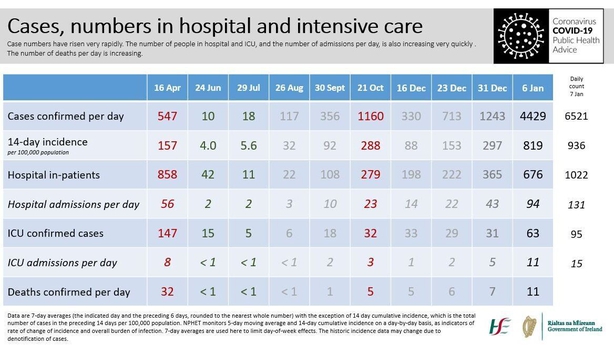 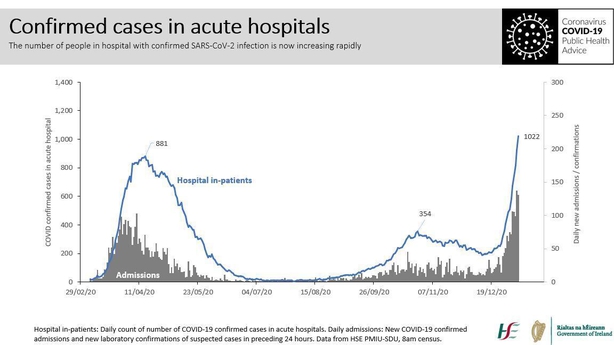 Speaking on RTÉ's News At One today, Tánaiste Leo Varadkar said there has been a slow start all around Europe to the vaccination programme, but he said it will be "better in the medium run, as Ireland will have reliability of supply by being part of the EU".

Also today, Minister for Health Stephen Donnelly told Morning Ireland that the Government expects to receive 110,000 doses of the Moderna Covid-19 vaccine by the end of the first quarter of this year.

An additional 17 deaths with Covid-19 were reported in Northern Ireland today alongside another 1,410 new infections.

Northern Ireland's chief scientific adviser, Professor Ian Young, has warned that as many as one in 40 people may have Covid-19 in some areas there. 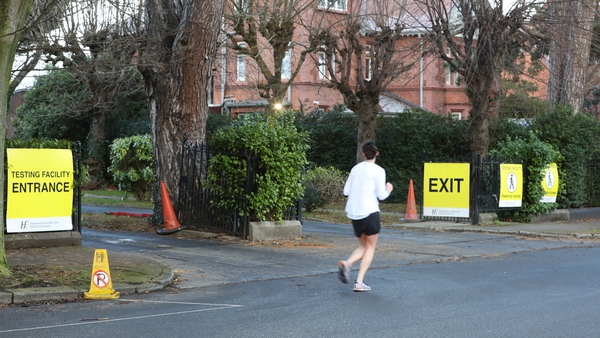