People have been urged to focus on the basics to combat the spread of Covid-19, amid concern that the recent progress made in reducing case numbers has been deteriorating.

There have been five further coronavirus-related deaths and 456 new cases of the disease notified to the Department of Health over the past 24 hours.

There has been a total of 1,984 deaths associated with the virus in Ireland.

The number of people in ICU is 33, an increase of two compared to yesterday. There are 274 patients with Covid-19 in hospital with 10 additional hospitalisations in the past 24 hours. 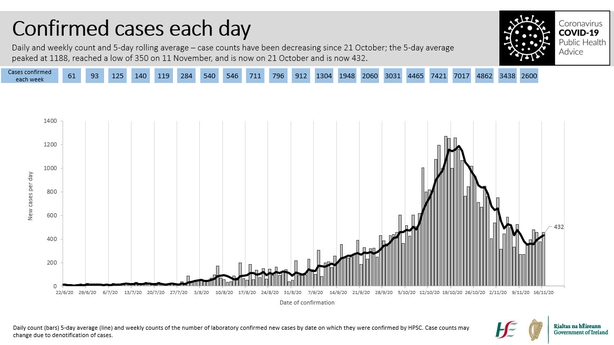 Deputy Chief Medical Officer Dr Ronan Glynn said they are "concerned" about the rise, and said there was only "a short period of time to turn this around".

He said he wanted to "implore" people not to focus on Christmas unduly but to focus on the basics. "We need people to stop coming into contact with each other."

There have been a number of clusters linked with funerals where people "tend to let their guard down".

The positive trajectory has "at best stalled, and according to a number of indicators is deteriorating" he told a National Public Health Emergency Team press briefing this evening.

Asked about the increase in cases over the last five days, Dr Glynn said they could not attribute it to any one cause, but were seeing "widespread cases across a range of different settings".

"We really have a short period of time to turn this around."@ronan_glynn says NPHET is seeing widespread Covid-19 cases across the country in a range of different settings. He appeals for people to focus on the basics in combating the virus | https://t.co/LRWAdClo1A pic.twitter.com/1jHNv1UF6g

The current rise in cases may be traced back to Halloween. "I cannot rule it out but it might be difficult to pin it down to any one activity. People may just be getting tired of the restrictions."

Asked if the rise in cases would put an exit out of Level 5 at risk in early December, Dr Glynn said NPHET did not want to contemplate that but it would be dictated "by what people do today and tomorrow".

He said "do not worry too much about what might happen in a few weeks' time.

"We all want a good Christmas, we all want to be with our family and friends," he added. The target for  December is to reduce infections to less than 100 cases a day but "this is not set in stone".

Replying to queries about people gathering to drink in the streets, Dr Glynn said it was very frustrating for business owners, healthcare workers and for older people and those with medical conditions who have essentially isolated themselves for "weeks and months now".

He said seeing scenes of drinking on social media must be "disheartening" for them but that the "silent majority" of people were doing the right thing.

The Deputy CMO said: "I don't have specific evidence that people getting together to drink on the streets has led to a cluster but the more that people do that, the more likely it is to happen."

Asked if he could envisage pubs reopening any time this year, Dr Glynn said "tonight is not about speculating about what might or might not happen".

Dr Glynn said it would take time to see if the new Covid-10 vaccines were safe and effective as well as the logistical requirements for implementing them.

"I am hopeful and optimistic [about vaccines] but it is too early for people to start dropping their guard or changing their behaviour simply because of the potential of a vaccine."

On the subject of people travelling home for Christmas, Dr Glynn said "ultimately it comes back to people's willingness to listen to public health advice".

He did not want to see thousands of people coming home and interacting across generations of their families as they could be asymptomatic and spread the virus.

Professor Philip Nolan, chair of NPHET's Epidemiological Modelling Advisory Group, said on Twitter that it was a "setback" that case counts have stopped decreasing.

A setback: case counts have stopped decreasing over the last 6 days. These infections probably occurred 2-9 Nov. What we do now determines where we will be in early December. It's hard, but focus on the basics: minimise our social contacts, keep our distance, hand hygiene, masks. pic.twitter.com/50kdf0Q8Id

"These infections probably occurred 2-9 Nov. What we do now determines where we will be in early December.

"It's hard, but focus on the basics: minimise our social contacts, keep our distance, hand hygiene, masks."

Religious culture of Ireland at a crossroads - Archbishop

Archbishop of Dublin Diarmuid Martin has said that many of those who attended church services before Covid-19 will never return to public worship, and that the Catholic Church needs to figure out how to define itself for the future.

Speaking on the same programme, he said the suspension of public worship has weakened the interaction of the church community.

Archbishop Martin said the church has to think about what it will look like in the future and how to reach out to people as a church community.

He also large church buildings may close, as "an empty building is more expensive to manage than a building in use".

His comments were first made during his homily at St Mary's Pro Cathedral in Dublin on Saturday, when he said the religious culture of Ireland and especially Dublin is "at a crossroads". 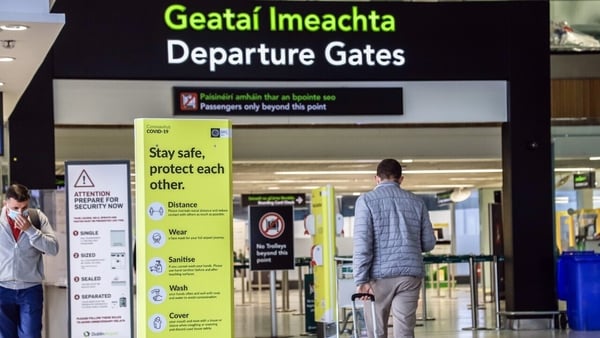